There is no interest in my sardine tacos, or my use of coffee as a spice. I asked several bloggers, to send me recipes; preferably easy to prepare, common ingredients, ethnic etc. In addition if I print the recipe, I'll plug your blog. Send recipes to me at the email address at my profile. I was going to print them all in one post, but I acquired too many. Political agreement doesn't matter. Atleast every month I'll continue this series. Leave comments about food, the blog, restaraunts etc. Everyone who sent recipes, will eventually have them published. I'm going in random order.

The next recipe comes from the Turkish-Kurdish blog Rastî. If you are interested in the struggle of the Kurdish people, particularly in Turkey for national rights, this blog is where to go for the latest news. You will find information not found in mainstream sources. Where else will you learn that there are few Turkish Kurds on the Iraq border, contrary to what Turkey will tell you. 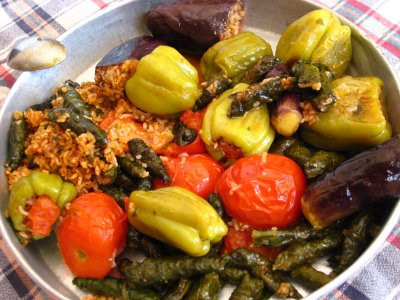 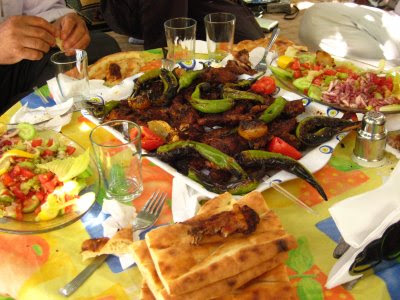 I never use the large, roundish eggplants for this because they have to be soaked in salt water to remove the bitterness. For this recipe, the eggplants must be whole. The slender eggplants in the West, known as "Japanese" or "Chinese" eggplants, are the ones to use for this recipe, as they are not bitter and require no soaking.

Eggplants cooked on coals acquire a smoky, slightly sweet, taste. The addition of red pepper flakes compliments the smoky sweetness very well. This dish can be served with grilled meats or as a meze selection.


Wash and dry the eggplants. In a grill with hot coals, lay the eggplants directly on the coals, turning them as they char. Cook them until they are completely soft. Don't worry if they turn black on the outside but take care not to let them burn. Remove them from the coals and let them cool a bit. Peel them, removing all the skin with your fingers or a paring knife. Cut off the tops and throw them away. Slice the eggplants on a plate and mash them with a fork. Add salt, red pepper flakes, a couple of tablespoons of olive oil, the chopped garlic, and a few squeezes of the lemon. Mix the added ingredients into the eggplant flesh well. Serve just warm or at room temperature.

Alternately, some people leave out the red pepper flakes and garlic, and instead substitute a couple of tablespoons of thick yogurt, like labne, and black pepper to taste.

This soup is eaten all over Turkey, including the Kurdish Region. It's included with meals or is used as part of a meze selection, and it's wonderfully cooling on hot summer days.

If you use regular cucumbers, peel and seed them, then coarsely grate. "Persian" cucumbers only need to be grated. In a large bowl, whisk the yogurt until smooth. Mix in the grated cucumber, vinegar, olive oil, mint, dill, and salt. If the yogurt seems thick, add a bit of water to thin it. Put the cacik in the refrigerator for a couple of hours until it is very cold. Serve in individual bowls, adding ice cubes for extra chill.

Alternately, mash one garlic clove and stir it in with the other ingredients. Leave the clove in the cacik while it chills, but remove it before serving. It will add just a hint of garlic flavor to the cacik.

Ayran is a yogurt drink that is served everywhere in Turkey. It's especially popular as the drink to accompany grilled meat or kebap meals, although I've had it with other meals as well. It can be made with plain water or with carbonated water. It should be served as cold as possible and it's very cooling and thirst-quenching on hot days.

You should use equal parts of yogurt and water (for example, two cups yogurt and two cups water). Put the yogurt in a large bowl and whisk it until smooth. Add an equal amount of water and whisk until well blended. Season with salt to taste. If the yogurt seems to make the ayran a bit thick, add a little more water. Ayran should be served very cold. If you use carbonated water, make sure you have chilled it well ahead of time because you will need to serve the carbonated version rather soon after mixing so it doesn't go flat.

you can also add ground black pepper (not too much of course) or dried dill leaves to the ayran (the way, it is often done in Armenia or Russia) ... fresh basil or lemon balm also works

Lovely stuff, never thought I'd come here for recipes but glad it's here.

I really like all meals carrying vegetables in the Balearics is widely used eggplant, red pepper, green pepper, zucchini, artichoke.
You have to go through Spain to know what food is a rich, rich, rich anywhere in the country.

Entdinglichung: In the US, some manufacturers sell an yogurt and orange juice drink. Your idea is exciting.

Daniel Hoffman-Gill: I occasionally highlight a blogger and a recipe the blog contributes.

Maria Teresa: Even eggs taste different in Spain. My friend who is a flamenco dancer, when she is in Spain, prefers Spanish eggs.

Eggplant is a marvelous vegetable.

These days I've been using the "asian" eggplant nearly exclusively. But if one were using a grill, the round, egg-shaped ones would be better.

The asian eggplants are excellent for providing texture/thickness to the sauce or the stew, without adding starch and carbs. Good for the digestion!

I tried yogurt and soda water. It is great. Adding pepper worked as well.

Foxessa: I lost about 50 pounds with a low carb diet. I was very strict.

Graeme: Our next party Louisiana themed.

You're making me hungry.

But if one were using a grill, the round, egg-shaped ones would be better.

I don't think so. In Kurdistan, the round eggplants are unknown. Only the slender ones are used. Get the larger ones with a diameter of about 2 inches

As for dew, you could add chopped fresh mint as well, although most Kurds might find a minted dew a little too cacik-y.

Seven Things About Myself
1) My dad was the only Jewish guy, in a Mexican street gang.
2) My head is shaved.
3) I had a 20 page FBI file while in high school. They accused me of starting a race riot, at a festival I never attended.
4) The CIA spied on me according to the Church Committee.
5) I'm reading "The Sun Also Rises" at this time.
6) I'm diabetic.
7) Ella Fitzgerald has the best voice in pop music, in all of history.

I won't tag anyone else. I got too much heat the last time I did.

CHRIS IOANNOU G.: I know that you don't give credit unless it's earned. I just drank "dew," a few minutes ago.

Mizgîn: I was emailed this link of Kurdish Music.

Thanks Renegade! Like I told Jimmy Higgins, its a sign of youthfulness to take the time to do these silly things. Hey, Marx did!

This is mouth watering and I just ate lunch! I am in favor of these food posts.

I've been going through quite a bit of yogurt.

celticfire: If Marx put up with being tagged, I will.

rent party: Thanks for visiting, considering you are on vacation.

Damn it! My wife loves to watch Emeril the chef. We watch it together. She Oooos and aggghhhhs at his culinary expertise and I...well my stomach growls and grumbles and pants and puffs as I try my best to keep from climbing through the television and eating the delish dishes he prepares and then- then I stop by your blog to learn of the world and what the hell do I get? FOOD! MORE DAMNED DELICIOUS FOOD! (He screams while weeping over his peanut butter and jelly sandwich.)

Speaking of food... What?... Renegade have I asked if you would like to contribute to The Peace Tree? If not I should have and if so I apologize for the repeat question. There are spots on Monday mornings midnight to noon and Tuesday 12pm to midnight, and Fridays midnight to noon...?

What say you, my friend?

Hello Ren. I have to admit I am not so much into eggplants but this food looks just so beautiful that I feel like trying it...right now! :)

And by reading the comments here I learned, well again, that you have a great musical taste too.

joice: Thank you for visiting.

I live for fine art.

Roman: You need to be more adventurous, about food.

I don't want to commit to another blog. I tried starting a second blog, and gave it up quickly, because I was overwhelmed. I have your email address, and could occasionally send you something to post.

If this is part of what solidarity requires I don't see how the left can fail.

now i know what to do with the eggplant we've planted! along with all the peppers.

a few of us have started a blog ANYBODY can use for recipes and money saving ideas. you may wish to check it out, ren - no political/religio/left/right b.s.

i'll be putting a halibut (or white fish) recipe up in the next couple of days.

thanks for posting these - they are so enticing ....and beautiful....sigh...

( I thought I commented earlier- but my comment vanished- sorry)

Renegade, the Kurdish music link you received is music from Iranian-occupied Kurdistan.

For a great example of Kurdish music from Turkish-occupied Kurdistan, listen to this from Aynur Doğan.