Afghanistan ‑ The War is Being Lost

Alan didn't need WikiLeaks to write this insightful analysis of Afghanistan. In this article there he explains Bonapartism, the situation with the generals, the resources discovery and prospects for the future.

The split between the US generals and politicians could not have come at a worse time. The sacking of McChrystal just at the beginning of the fighting season could disrupt the entire counter-insurgency campaign, which was already going badly. The fact is that a military victory is out of the question. The greatest military power in the world is now overstretched in the region.

RENEGADE EYE
Posted by Frank Partisan at 11:07 PM No comments:

Oliver Stone's South of the Border ***

Oliver Stone presents in limited release in the US and Europe, a documentary film called South of the Border. A tidal wave of leftist governments has been flowing throughout the Americas. If in 2006 Manuel López Obrador had won, Mexico would have joined the surge. In light of how these events are covered even in the countries where the changes occurred, by the main media outlets, this movie is a welcomed change.

This movement towards the left, was started in reaction to the US controlled International Monetary Fund and its neoliberal policies. That is the unifying factor that spurred what is called the Bolivarian Movement. Stone jetsets to five countries to meet seven Latin American heads of state. Besides Hugo Chavez who is the main focus of the movie, he visits Evo Morales of Bolivia; Cristina Kirchner of Argentina (and her husband, ex-president Nestor Kirchner); Lula da Silva of Brazil; Fernando Lugo of Paraguay; Rafael Correa of Ecuador; and Raul Castro of Cuba. It's uncommon to hear words that aren't just sound bites to portray them as monsters. They are humanized here, Chavez visits the home of his birth, and falls off and breaks a bicycle. We see Chavez driving around Caracas, and casually being approached without a wall of security. Evo Morales teaches Stone how to eat coca, and plays some soccer with him.

The biggest part of the movie focuses on Hugo Chavez. Included is footage of the coup by Chavez against Carlos Andrés Pérez in 1992. Chavez taking responsibility for the coup and surrendering is shown, as is hero status after being let out of prison. Much of what was covered better in The Revolution Will Not Be Televised about the 2002 coup was recapped. This is shown alternately with mostly Fox News coverage of events for joke effect.

George W. Bush (43) was castigated for the US's immediate support for the 2002 coup. This film was made the time when Barack Obama was inaugurated president of the US. All of the leaders are shown watching an inauguration speech by Obama. Chavez hopes he will be like Roosevelt, and initiate a New Deal. Not only Oliver Stone had illusions Obama would be different than other imperialists.

Lula da Silva told about how the IMF tried to discourage him from paying off all of Brazil's debt to the IMF. We meet Fernando Lugo of Paraguay, who came to power with a background in Liberation Theology. The Nestors tell Stone, we now have presidents in South America who look like the people. Bolivia had a president who didn't speak Spanish. Rafael Correa says the US can have a military base in Ecuador, if he can in Miami.

Oliver Stone made it clear near the end of the movie, he wasn't socialist. He believes in a "benign capitalism." I wouldn't use that point to condemn the movie, but rather as a good point for discussion. The Bolivarian leaders are not a monolith. Stone makes them all seem as equals. The subject of the revolutionary tide in Latin America is dealt with superficially, still the positives of this movie outweigh the negatives.

Awhile back, particularly during the Clinton administration, the media would flagellate itself every so often for rushing, lemming-like, to cover some story or other that was being touted on the Drudge Report, and then, after a period of reflection, deciding that it shouldn't be. There was usually a Howard Kurtz column to demarcate such an episode. But the recidivism rate was high. Invariably, the media would chase the next Drudge rumor, and the whole cycle would repeat.

That doesn't seem to happen anymore, at least not with Drudge. But it does happen, and more powerfully than ever, with Andrew Breitbart, who has inherited Barnum's instinct for what will cause a circus and the certainty that suckers are still being born every minute. One difference is that Drudge usually focused on sex scandals and tawdry personal humiliations, which, in the end, is hardly worth getting worked up about. Yes, yes, shame on reporters for taking the bait. But c'mon.

Breitbart focuses on race. Today's episode with Shirley Sherrod, who was forced to resign from the Agriculture Department on the basis of a doctored and intentionally misleading videotape is an especially ugly case in point, calculated to stir the very worst racial resentments. This time the political world--the NAACP, the Agriculture Secretary--moved as quickly as the media world to unthinking response, and I suspect it happened precisely because race was involved. I don't doubt that the administration's understandable desire to avoid racial issues played a big part in how this turned out.

But what's galling to me--gut-wrenching, really, like watching old news footage of blacks being beaten and clubbed at lunch counters--is that Breitbart obviously understood the powerful effect his tape would have, posted it anyway, and then assumed the role of ringmaster, expertly conducting the media circus, fanning the blames. It's hardly the first time. But the moral ugliness of what's just happened is glaring, and it's hard for me to see how the media can justify continuing to treat Breitbart as simply a roguish provocateur. He's something much darker.

The Mexican Revolution: Its Past, Present and Future 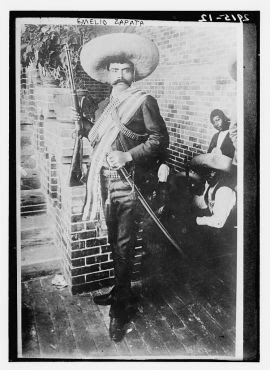 This year marks the hundredth anniversary of one of the great events in modern history. On November 20th of 1910 Francisco I. Madero denounced the electoral fraud perpetrated by President Díaz and called for a national insurrection on 20 November 1910. This marked the beginning of the Mexican Revolution. Today, the conditions have matured for another revolution, this time with a mighty proletariat at its head.

Venezuela: Economic War In the Run-Up To The Parliamentary Elections 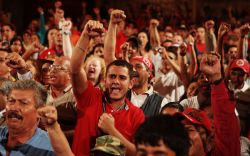 If it is to succeed, the Venezuelan revolution must be taken to the very end, with the expropriation of the capitalists and landlords who still control two thirds of the economy. This is a powerful lever in their hands that they are using to organise economic sabotage to undermine the government. The right-wing, reformist fifth columnists within the Bolivarian movement are attempting to hold back the revolution. That is where the danger lies.

If the Police Ask, Tell Them I Was On Twitter All Night

I don't do anything useful with Twitter, except entertain myself reading celebrity tweets. I have picked out a few, to feed your curiosity. If you add anybody, add @GaryJBusey.

@mariamenounos Forgot to run last night! On treadmill right now since its super hot out.having friends over for dinner later so a night run is out.

@GaryJBusey Paris Hilton put in cuffs just for puffing on a blunt. Stupid slut, can't she smuggle pounds of drugs up her cunt?

@GaryJBusey When @Nick_Nolte's zipper's down he don't care, you could stare. 'cause you can't see his dick through all that pubic hair

@GaryJBuseyJoke: So, Roman Polanski walks into a bar...but that's what happens when you can't take your eyes off the kids at the playground.

@GaryJBusey Hey, @LindsayLohan and I wear the same ankle bracelet! It's like we're BFFs!

@LindayLohan A waitress just hit me - punched me for no reason.