Spartacus - A Real Representative of the Proletariat of Ancient Times 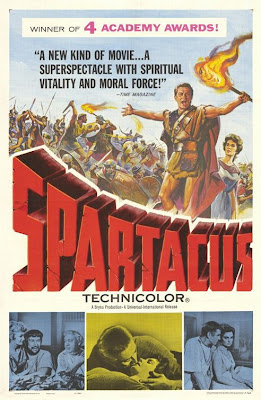 In the first century BC, a slave named Spartacus threatened the might of Rome in a massive slave uprising. The spectacle of these most downtrodden people rising up with arms in hand and inflicting defeat after defeat on the armies of the world’s greatest power is one of the most amazing and moving events in history.

Robert Weissman: Shed a Tear for Our (U.S.) Democracy

Yesterday, in the case Citizens United v. FEC, the U.S. Supreme Court ruled that corporations have a First Amendment right to spend unlimited amounts of money to influence election outcomes.

Money from Exxon, Goldman Sachs, Pfizer and the rest of the Fortune 500 is already corroding the policy making process in Washington, state capitals and city halls. Now, the Supreme Court tells these corporate giants that they have a constitutional right to trample our democracy.

In eviscerating longstanding rules prohibiting corporations from using their own monies to influence elections, the court invites giant corporations to open up their treasuries to buy election outcomes. Corporations are sure to accept the invitation.


The predictable result will be corporate money flooding the election process; huge targeted campaigns by corporations and their front groups attacking principled candidates who challenge parochial corporate interests; and a chilling effect on candidates and election officials, who will be deterred from advocating and implementing policies that advance the public interest but injure deep-pocket corporations.


Because the decision is made on First Amendment constitutional grounds, the impact will be felt not only at the federal level, but in the states and localities, including in state judicial elections.

In one sense, the decision was a long time in coming. Over the past 30 years, the Supreme Court has created and steadily expanded the First Amendment protections that it has afforded for-profit corporations.

But in another sense, the decision is a startling break from Supreme Court tradition. Even as it has mistakenly equated money with speech in the political context, the court has long upheld regulations on corporate spending in the electoral context. The Citizens United decision is also an astonishing overreach by the court. No one thought the issue of corporations' purported right to spend money to influence election outcomes was at stake in this case until the Supreme Court so decreed. The case had been argued in lower courts, and was originally argued before the Supreme Court, on narrow grounds related to application of the McCain-Feingold campaign finance law.

The court has invented the idea that corporations have First Amendment rights to influence election outcomes out of whole cloth. There is surely no originalist interpretation to support this outcome, since the court created the rights only in recent decades. Nor can the outcome be justified in light of the underlying purpose and spirit of the First Amendment. Corporations are state-created entities, not real people. They do not have expressive interests like humans; and, unlike humans, they are uniquely motivated by a singular focus on their economic bottom line.

Corporate spending on elections defeats rather than advances the democratic thrust of the First Amendment.

There are some things that can be done to mitigate the damage from today's decision.

First, we must have public financing of elections. Public financing will give independent candidates a base from which they may be able to compete against candidates benefiting from corporate expenditures. We will intensify our efforts to win rapid passage of the Fair Elections Now Act, which would provide congressional candidates with an alternative to corporate-funded campaigns before fundraising for the 2010 election is in full swing. Sponsored by Sen. Richard Durbin, D-Illinois, and Rep. John Larson, D-Connecticut, the bill would encourage unlimited small-dollar donations from individuals and provide candidates with public funding in exchange for refusing corporate contributions or private contributions in amounts of more than $100. The proposal has broad support, including more than 126 co-sponsors in the House.

In the wake of the court's decision, it is also essential that the presidential public financing system be made viable again. Cities and states will also need to enact public financing of elections.

Congress must ensure that corporate CEOs do not use corporate funds for political purposes, against the wishes of shareholders, with legislation requiring an absolute majority of shares to be voted in favor, before any corporate political expenditure is permitted. There are other legislative approaches to limit today's damage, including a range of measures proposed by Representative Alan Grayson, D-Florida.

These mitigating measures will not be enough to offset today's decision, however. The decision itself must be overturned.

Winning a constitutional amendment will be a long-term effort. The starting point is for the people to petition their government to demand action. Public Citizen with allies has launched such a petition effort. Got to
Posted by MarxistFromLebanon at 9:28 PM 25 comments:

I attended a screening of Crazy Heart, with director-writer and producer Scott Cooper in attendance. The story is loosely based on the life of take your pick; Merle Haggard, Kris Kristopherson, Willie Nelson etc. The original idea was for it to be based on Hagarrd's life, except that his estate includes too many wives.

Bad Blake (Jeff Bridges) had too many wives, and too much drink. Once on top in country blues, now Bad Blake is playing bowling alleys. This movie is The Wrestler set in the music world. This movie is carried by Jeff Bridges, who gives a performance of his life. Maggie Gyllenhaal plays her part well as his love interest.

Expect Ryan Bingham to win an Oscar for the song The Weary Kind, which binds the movie. Ryan plays in the movie, the leader of the bowling alley pick-up band.

Concert footage is shot at a Toby McGuire concert. The movie piggybacked his concert. Robert Duvall who has a part in the movie, and co-produced it, arranged for the concert footage. In concert was Bridges and Colin Farrell, playing Tommy Sweet, a big name headliner, who started with Bad Blake. T-Bone Burnett was one of the producers, and wrote much of the score.

The Oscar has Jeff's name on it.

The Lebowski references are subtle.

RENEGADE EYE
Posted by Frank Partisan at 3:08 AM 14 comments:

I know that you know that all press is good press, so I appreciate the shout-out. And you make God look like a big mean bully who kicks people when they are down, so I'm all over that action. But when you say that Haiti has made a pact with me, it is totally humiliating. I may be evil incarnate, but I'm no welcher. The way you put it, making a deal with me leaves folks desperate and impoverished. Sure, in the afterlife, but when I strike bargains with people, they first get something here on earth -- glamour, beauty, talent, wealth, fame, glory, a golden fiddle. Those Haitians have nothing, and I mean nothing. And that was before the earthquake. Haven't you seen "Crossroads"? Or "Damn Yankees"? If I had a thing going with Haiti, there'd be lots of banks, skyscrapers, SUVs, exclusive night clubs, Botox -- that kind of thing. An 80 percent poverty rate is so not my style. Nothing against it -- I'm just saying: Not how I roll. You're doing great work, Pat, and I don't want to clip your wings -- just, come on, you're making me look bad. And not the good kind of bad. Keep blaming God. That's working. But leave me out of it, please. Or we may need to renegotiate your own contract.

From a letter to the Minneapolis Star and Tribune

RENEGADE EYE
Posted by Frank Partisan at 11:09 AM 24 comments:

The Class Struggles in South Yemen

These days, there are a lot of reports on Yemen in the mainstream media in the West. Most of these reports really don’t say anything about the desperate situation inside Yemen. Furthermore, they say nothing about the class struggle and the revolutionary traditions in Yemen.

Does this look familiar?

RENEGADE EYE
Posted by Frank Partisan at 2:35 AM 10 comments: