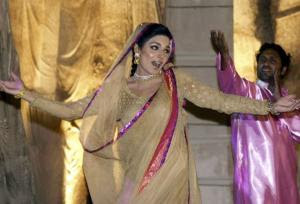 The dancing girls of Lahore, the cultural capital of Pakistan, are on strike in protest against the tide of Talibanisation that is threatening to destroy an art form that has flourished since the Mughal empire.

The strike, which is supported by the theatres where they perform, was sparked by the decision of Lahore High Court last month to ban the Mujra, the graceful and elaborate dance first developed in the Mughal courts 400 years ago, on the grounds that it is too sexually explicit.

"The Mujra by its very nature is supposed to be a seductive dance," says Badar Alam, a cultural expert. He recalls that attempts were made to ban it during the 1980s. "Gradually, it returned to commercial theatre, mostly by paying off officials. The question remains: does the government have the right to engage in moral policing?"

The government and High Court in particular have no doubt about their right to do just that. They have tried to encourage "family friendly" dances, but once-packed theatres are now near empty, despite dropping their prices from 300 rupees to 25 rupees a seat.

The dancers are also distressed by the situation. "Theatre needs dance like food needs water," says Rabia, a dancer and actress. "Some girls were making up to 15,000 rupees in one night. Hundreds of these girls from poorer backgrounds will be out of the work if the crowds do not come back."

The ban on dancing is a symptom of a more dangerous trend in Pakistani society. "If the government engages in moral policing," says Badar Alam, "it gives vigilantes licence to do the same. It fuels intolerance and de-secularisation by violence and intimidation and opens the door to extreme Jihadi Islamic movements."

Over the past few months, there has been a crescendo of violence in support of fundamentalist morality in Lahore. In the middle-class Garhi Shahu neighbourhood, young men and women used to meet in fruit-juice bars. There was nothing particularly salacious going on but, two months ago, three bombs exploded among them, killing one man and wounding others.

One bomb went off in a juice bar called Disco, where Mohammed Zubair Khan said he doubted if his customers would ever come back. "Everybody's frightened," said Saeed Ahmed Afiz, the owner of a another bar. Asked what he thought of those who had ruined his business, he declared surprisingly: "They were not terrorists because they did not kill anybody. They did the right thing." Asked about the man who died, Mr Afiz added unfeelingly: "Maybe he was just here to see the show."

A striking feature of those suffering persecution from fundamentalists is not their fear but their acceptance that, if they had encouraged immorality, they deserved punishment. The main centre for selling CDs and DVDs in Lahore is Hall Road. But when one of the tough-looking shopkeepers received a threatening letter accusing him and others of selling risqué films, the mood was not one of defiance, but of submission. The traders heaped up the forbidden DVDs and CDs in the middle of Hall Road and made a giant bonfire. "I swear we sell no pornography," said one nervously.

RENEGADE EYE
Posted by Frank Partisan at 11:36 AM

I sometimes wonder why certain Muslims are so frightened of art, dance, theatre and the power of it.

And then I remember just that, the sheer power of it, the liberation of human expression, the power in making art with the body.

It transforms us and the spectator into gods.

Forbidding creative expression is a matter of power and control of populations generally, and always, women, particularly.

In every culture the performance arts have been associated with sexual immorality and prostitution. That's a variation on these same methods of power and control, particularly over women.

Creative expression is capable of endlessly creating modes of criticizing and satirizing and making look foolish the ruling powers.

Can't have that going on -- particularly from women.

How terrified these 'muslim'wingers are of women and the feminine. They can't even see a woman without being provoked into paroxyms of lust and violence. That is them -- not women, and not everybody else either. But they can't imagine it any other way. Besides, as Clete Purcell explains it to Dave Robicheaux in James Lee Burke's latest and real post-Katrina novel -- referring to a victim of torture, rape, mutilation, murder: "To use your own words, why do the shitbags do anything? Because they enjoy it, that's why . . . ." (p. 25 Chap 3).

Foxessa: Even in the US that is true. Jewish people were able to thrive in theater and movies, because the Christian church thought show business was sin.

Daniel: You know that as much as anyone, that's for certain. That also applies to Foxessa.

There is nothing wrong with imagination and mythical beings, in the right place that is.

And by gods I meant empowered creatures, in charge, creative and making.

I sincerely hope that this thread does not rot with back and forth nonsense.

Yeah, I'd like to see the dance as well, as I would like to do a post on it myself. I wasn't aware that the dance was that big of a cultural influence in Pakistan. Interesting story. I'll check YouTube as well, maybe type Pakistan + dance in the search bar.

I found a lot, but with some of them I don't know whether its traditional Paki dance or Bollywood style. Here's one-

Daniel H-G; You lucked out so far. No back and forth.

Blue in Green: The point of the post is the repression.

Pagan: I think the dance is more folkloric style.

I wonder what a bomb in a S.F. bath house or Castro Street restaurant would do in terms of changing American politics.

...but then why would the Taliban strike out against their most influential American allies?

There'd probably be another "Day w/o a Gay Day"... like the "dancing girl" strike.

Yep, THAT would bring America to its' knees...

This "strike" by the dancing girls sounds precisely like what the Taliban has ordered.

If I were a "dancing girl", I'd be putting on voluntary public performances, not "striking".

Face it folks, the Paki Taliban has won.

The Islamists did not want the dancing girls to not dance, they wanted them to do different kinds of dances, more "family friendly" entertainment, and they, the girls, are refusing to do so, with the support of the theater owners.

You really don't expect me to believe that, do you pagan?

From the creators of the "burkha"? LOL!

Yeah, I know. Actually, that was my initial thoughts as well, that by striking they were actually playing into their hands. But I was just going by the article. I don't know, maybe they were wanting them to do more propaganda type stuff, maybe even wearing burkhas, like women "are supposed to do". Remember, these aren't necessarily Taliban doing this, the article just imputes a similar philosophy to them. There are few even fundamentalist Muslims as fundamentalist as the Taliban.

For example, Sheikh Omar, the leader of the Taliban, refuses to allow his picture to be taken, on the grounds that it constitutes "idolatry", while Bin Laden seems to have no problem allowing his ugly mug to be photographed or taped. What pictures of Omar are extant were taken without his permission or knowledge, like from a distance. So there are some degrees of differences even amongst the more fanatical sects.

I only wish there were some chance that they could become more "moderate" and/or accepting.

Can I just flag that the word 'Paki' is a racist term, best not to use it I think.

At least it's out in the open now for all to see but hopefully, it'll be deleted along with my comments asap.

Who gives a f*ck, you limey poofter.

Daniel H-G: I think you'll want to save the evidence. You might need it it later.

FJ: There are many, if not most Pakistanis are secular, and not supporters of Islamism. No Islamist could get millions to come out into the streets as Benazir Bhutto.

Calling the wrong person Paki in London, could get you killed.

Pagan: Probably supporters of the Taliban for sure.

Racist and a homophobe.

Calling the wrong person a racist or a homophobe in Baltimore can get you killed, too. Especially if you're a limey poofter. ;-)

You're the right person to call a racist and a homophobe because all the evidence points to that.

FJ does being an ass come naturaly to you or do you have to practice...

This is him practicing.

All right, I was going to try o ignore this, but I see now certain people are just determined to drag it on and on, and since I'm the one, not Farmer John, that first used the term Paki in the comments of this post, I guess I'd better step in here.

Here's what I said-

"I found a lot, but with some of them I don't know whether its traditional Paki dance or Bollywood style. Here's one-"

I got the term from the same YouTube site where I found the Pakistani dance video. also recopied above. It was posted by a Pakistani, the majority of the comments, if not all of them, were from Pakistanis, and it was there I saw the term Paki. It was not the first time I'd seen the term, but I just assumed that Paki was short for Pakistani. My apologies if I inadvertently offended any Pakistanis who might have read this.

So I assume we can move on now?

Visit www.PAKCOMICS.com Its a Full Time Fun! Mobile Prices, Grocery Prices, Games, Live TV, Jobs, Admissions, Competitions, Wifi HotSpots, Bacha Party, Ladies Corner, Offers, and many many more things! So Hurry Up and Visit now on www.PAKCOMICS.com And don’t forget to like us on our FaceBook page. Keep Spreading PAKCOMICS.com to all.