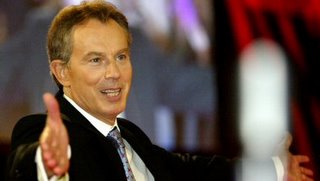 According to "The Independent" on Friday March 03, 2006, British prime minister Tony Blair revealed at The Commonwealth Club's World Book Day launch, that he was influenced to get involved in politics, after reading Isaac Deutscher's trilogy about the life of Leon Trotsky. According to Tony Blair, "There were people who got me very involved in politics. But then there was also a book. It was a trilogy, a biography of Trotsky by Isaac Deutscher, which made a very deep impression on me and gave me a love of political biography for the rest of my life."

If dear Tony is thinking of taking a holiday in Mexico anytime soon, then I am all tooled up and ready.

If only this was reflected in his policy making.

It doesn't surprise me. Both Blair and Trotsky believe in nation-building by invading other countries and imposing their ideals there. Trotsky failed in Poland. Blair is failling in Iraq.

which made a very deep impression on me and gave me a love of political biography for the rest of my life."

Weird how many politicians are deeply interested in the genre of biography!

If Blair was referring to the underlying main theme of the Deutscher book (maintaining the purity of one's ideals), I can agree that the life of Trotsky is a prime example.
Unfortunately, ideals alone are not enough.

Hopefully he suffers the same fate...

"It doesn't surprise me. Both Blair and Trotsky believe in nation-building by invading other countries and imposing their ideals there. Trotsky failed in Poland. Blair is failling in Iraq".

Trotsky actually opposed invading Poland but was voted down. But don't let that get in the way of posting.

Trotsky did oppose invading Poland, and never had a nationalist agenda. He was opposed to Poland's attempts at conquering the Ukraine.

Trotsky (...) never had a nationalist agenda

I never said he did. All I am saying is that he organized the Red Army that invaded Poland to impose Communism there by force (a little bit like Blair who invaded Iraq to impose Democracy there by force). As for Ukraine, the Soviets were in no position to complain - they invaded it too...

And if he was so opposed to the Polish campaign, why didn't he resign in protest ? Like George Galloway...

Best to stay within the workings surely than cast tiny stones from the outside?

Trotsky and Gorgeous George Galloway have nothing in common. Trotsky never appeared in Celebrity Big Brother.

But the Polish example does prove the principle that you don't impose socialism on another, or anything else for that matter, from the inside of a war room.

And Poland proved that again in 1945 when Stalin tried to force whatver the Soviets had turned into by then onto another country(after murdering most of the Polish Communist party). If he had let the Poles get on with it by themselves they would have voted for a socialist, land reforming government anyway, and would now ne a fully modernised nation.

Hmmm.Maybe this view is a bit premature. As history views events, it may still be too early to pass judgement. Besides, the comparison of 1945 Poland and 2002 Iraq is a bit of a stretch.
Stalin was using his own unique custom blended variety of communist doctrine to consolidate the Soviet hegemony over eastern Europe in order to gain a wider sphere of influence.
The US/UK et al, as a result of faulty intelligence, invaded Iraq to eliminate what was perceived to be a rapidly growing threat. Once there, the push for democratic elections was just about the only "reasonable" replacement for Saddam's absence.
As it turns out, it may just work.

Not just Bliar and Trotsky, check the US Neocons out, they started out as followers of Trotsky and have developed 'Permanent Revolution' to perfection ably abetted by Bliar, Berlusconi, Azhnar, Murdoch, Yushchenko, Berzovsky, Abramavich, Clear Channel Communications, the Bin Ladens etc etc wake up, smell the Fascism/Totalitarianism

The Bolshevik war with Poland began with the Polish invasion in May of 1920 (Nove, 1969, p75) and ended with a Russian defeat in October. This was not instigated by Russia.

Second the Schatmanite origins of many neo-cons is interesting but really has nothing to do with being revolutionary or on the sie of the workers. It consists entirely of the fierce anti-Sovietism of the Schatmanites and their cozying up with U.S. imperialism