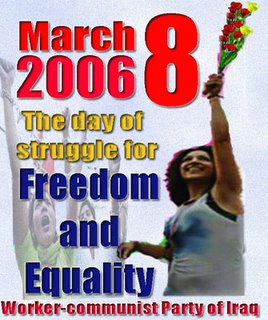 International Women's day has grown from its beginnings in 1908, by a women's suffrage caucus in the Socialist Party. On March 08th, 1908; Branch 03 of the New York Socialist Party, held a mass meeting on women's rights.

Make it a day to say No! To Islamic Sharia law in Iraq!

For secularism, equality and freedom!

The Organization of Women’s Freedom in Iraq (OWFI) sends its greetings for this historic day to women activists all over the world. For centuries women have been struggling for their rights and for equality and liberation in all parts of the world. Major changes have been won, but nowhere do we have real equality, and in many parts of the world the oppression and exploitation of women are still striking. Iraq is one of those places.

The US-UK occupation has pushed Iraqi society back into a medieval world in which “honour killings”, beheadings, forced veiling and seclusion and sexual servitude are now a part of everyday life.

Now the reactionary, tribalist and sectarian government the US has installed in Iraq wants to go further by institutionalizing the oppression of Iraqi women. The outcome of a war and occupation which was sold to the world as bringing “liberation” and “democracy” has been a hand-picked group of political hacks and tribal elder imposed on Iraqi society through a pseudo-parliament and a constitution that makes women second class citizens.

For the last three years Iraqi women have stood up against not only the occupation but against political Islamist groups who are fighting to establish an Iranian or Saudi Arabian-type regime of gender apartheid, with all marital and family matters regulated by Islamic Sharia law.

OWFI is fighting to mobilize Iraqi women and their supporters across the world against the occupation and Islamisation of Iraq. The USA and its allies claim that in facilitating our subjugation they are respecting “Islamic culture” and “Arab culture”.

We say that this viewpoint, permanently relegating people in the so-called Muslim world to barbarism, borders on racism. We oppose politicized religion and demand a secular and egalitarian constitution for Iraq!

They want to divide people along lines of religion, ethnicity and gender. We are demanding equality for all Iraqis regardless of their origin! Women in Iraq need your support more than ever. OWFI has been able to maintain and continue its work because of international support and solidarity, because of solidarity from women’s, progressive and workers’ organizations all over the world helping us to stand firm for our lives and our liberties.

We call upon you to join with us this International Women’s Day (8 March) to say No to religious law in Iraq and yes to equality and freedom.

No to Islamic Sharia Law in Iraq!

How many votes did those bozos got in the last Iraqi election ?

The US-UK occupation has pushed Iraqi society back into a medieval world in which “honour killings”, beheadings, forced veiling and seclusion and sexual servitude are now a part of everyday life.

Didn't some American general or someone once say that they were going to 'bomb them back to the stoneage'? Looks like they just did.

But it isn't just the invasion that's done this. First it was Saddam and his war with Iran, Kuwait. Then the US sanctions helped finish off the economy (and kill half a million children, according to the UN itself).

Iraq used to be one of the most secular and prosperous in the middle east. Not anymore it ain't.

These bozos are the secular, pro women's rights Iraqis, that the war was supposedly fought for.

The Iraqi women sorely need a 2006 Iraqi version of Emma Goldman... but sadly she would be forced to wear the hajib.

Wasn't the establishment of women's equality the last remaining MORAL justification for US invasion of Iraq -- after it was irrefutably proven that there were in fact no WMDs?

If the US do not pull off at least this particular moral victory, they can be considered to have morally failed, unequivocally.

These bozos are the secular, pro women's rights Iraqis

The poster says Worker Communist Party of Iraq. If these guys are the only 'secular, pro-women Iraqis', then that country is screwed beyond all hope....

Like finding out that Hitler is the least anti-semitic guy in the room....

The Worker-Communist Party (Iraq), has a manifesto linking Marxism with humanism.

Sonia, does that make them Hitlerite?

Agreed. A lot of people in Iraq don't have the class consciousness to vote for a party like this. They'd much rather slaughter each other in the name of some religious faction of Islam or some purported nationalist self-determination spouted by polystricksters on the make.

A lot of people in Iraq don't have the class consciousness to vote for a party like this. They'd much rather slaughter each other

None of Sonia's points have any connection to this group. They believe in Marxism and humanism. This group rejects Trotskyism I believe. They are supported by Trotskists, because they are authentic revolutionaries.

It is silly pinning Stalinist crimes on them.

It is silly pinning Stalinist crimes on them

Undoubtedly very silly. Next time I will draw a swastica on a wall, I will tell the police it is silly pinning the Nazi crimes on me...

Communists killed over 100 million people in the last century. Any party that calls itself Communist should have taken that into consideration. If they didn't, they shouldn't be surprised if I follow them like a rabid dog and loudly bark obscenties at them.

Stalinists kill people like those associated with the WCP in Iraq.

All conservatives are not Nazis. Churchill wasn't a Nazi, but Nazis wanted Churchill dead.

All communists/socialists are not Stalinists. To think so is to simplify political matters to an absurd level of abstraction.

The Stalinists (aka the Communists)

Mike B on his blog

All communists/socialists are not Stalinists

Mike B on Ren's blog

Let's try to agree on some definitions:

COMMUNISM: a very meaningful term used quite consistently (by both its supporters and its foes) to describe a left-wing dictatorship where there is no private property (or very little).

STALINISM: an extreme form of Communism, where even loyal Communists are slaughtered alongside anti-Communists (see also "Cannibalism")...

MARXISM: a theoretical philosophical value system, that is extremely appealing in the abstract. Caution: once mixed with a dose of reality, it could be quite deadly.

TROTSKISM: The residue left when Communism transformed itself into Stalinism. Ignored by anti-Communists, this residue was fanatically persecuted by Stalinists. This residue was ultimately used to fertilize a garden called "Neo-Conservatism"...

Neocons came from Trotskyism is a delusion on their part.

All cold war anticommunism was a reaction to the fear of Trotsky's theory of permanent revolution.

The old Maoist books all had Mao's drawing, next to Stalin's drawing. The Trotskyists were jailed or killed under Mao.

Pol Pot was some type of Maoist, along with The Shining Path, never supported by real communists. Pol Pot had US support. Trotsky wrote against terrorism all his life. Terror ultimatly is an individual substituting themselves for a mass movement.

I think at one time you wouldn't have acknowledged differences.

This group in Iraq, puts humanism as the center of Marxism. It is a group on the left that is correct about Islamism.

Sonia, are you a neocon Trotskyist??

are you a neocon Trotskyist??

Definitely not. My heroes are counterrevolutionnaries: Ivan Bunin, Patriarch Tikhon, Denikin, Wrangel, as well as anarchists like Fanny Kaplan.

What I like about Trotsky is that he had the courage to denounce Stalin when the rest of the world (including some right-wing conservatives) were openly praising him as Uncle Joe. But I wish he actually did some of the things Stalin was falsely accusing him of: namely trying to violently overthrow the Stalinist regime...

Go here to see a video of Iranian women demonstrating on March 8th.
The cops broke up the demo (of course).