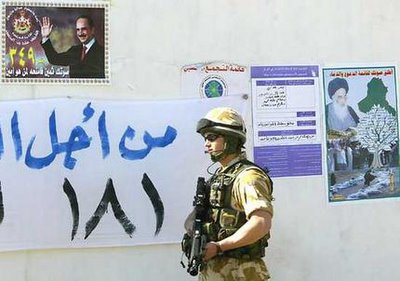 BBC announced results of a poll , sponsored by BBC, ABC and international news agencies, carried out by Oxford Research International. It was released 12/10/05. In all,1,711 Iraqis were interviewed throughout the country in October and November 2005.

The news has ammunition for both sides of the Iraqi occupation debate.

Not mentioned in this poll, earlier polls showed support for Coalition withdrawal. They also support a strong central government, despite a loophole filled constitution.

I'm presenting the complexity of the situation.

I find polls fascinating. Thanks for sharing this one.

If the ruling class of the U.S. were polled, I'd bet that they'd pretty much mirror the opinions held within the leadership of the two major parties to wit: the U.S. is not going to give up certainty and control over the second largest proven oil pool in the world. To whatever degree of democratic practice the Iraqi State eventually morphs, the ruling class and the economic structure of that nation(s) will ensure that those imperial concerns of the U.S. are enforced.

It makes more sense for the oil used for US concerns, than sabotaging the pipelines, and creating ecological disaster. Why do the Islamists, destroy the country's main resource, and expose the population to chemical dangers??

That's what Islamism does.

I cringe whenever I hear Mr. Hitchens use the term "Islamofascism." It's redolent of doublespeak. Clerical Islam is authoritarian but not fascist in any sense I can discern, other than idealizing the past and appealing to prejudice. Conceptually there is no necessary connection between political Islam and terrorism; the latter is a tactic used by groups with a variety of ideologies. The only circumstances under which I can imagine this movement as a threat is if we reproduce our Iraqi experiment -- which is irredeemable. This is a different culture and a fractured polity which has successfully resisted other high-minded attempts to capture its resources under the guise of democratisation (viz, Britain 1919 through their occupation, drawing of borders, installation of a puppet King, overthrow of said King, expulsion of said Brits, and finally the
Saddam episode). It seems to me that this is just the attempted rape of a nation, and the fact that climax has not yet occurred is no reason to prolong the crime.

This is what makes the difference between good politics and lousy politics, if we all agree the US is on a quest for a militaristic empire; this makes the comparison with the former British Empire a valid one in the recent history.

Back at the days of the British empire, the subjective and scientifically driven understanding of the Arab region in general and Islam in particular were the major theme as opposed to the current views/opinions marketed by a large segment of the prominent American intellect figures that are close to the ruling elite, the views/opinions that Islam is intrinsically violent, anti-humanity and this sort of rhetoric.

Now again compare that current views/opinions about Muslims marketed by those prominent figures in the American intellect arena to the view of the Jews marketed in Nazi Germany and you see a very similar sort of non-scientific, unfounded and non-subjective "opinions" (here I stress on “opinions” as opposed to “scientific theorems”).

The prevalence of Correct and Scientific understanding of the complexities of a particular group of people in a region (my Arab region as an example) leads to a “political master plan” of a much higher quality. Thus this better understanding of complexities might not change the intentions of an empire (i.e. still maintain the same objectives), but it changes how well this empire manages its universe of discourse.

As a non American, the worst thing Bush administration is doing for America in my view is the cashing out of America’s moral assets (i.e. rendition, torture, WMD lies, secret prisons, civilian deaths, Guantanamo, etc….) all is justified as sacrificing some freedoms for security, which implicitly accept that many innocent individuals are crushed in the process! I come from a region that lived in this environment for loooonG! So believe me when I tell you this eventually leads to opposite results, it’s the sort of thing you measure after some time, the results are never immediate, and history tells it, it all depends on how you want to read it.

I’m sorry for the long post…I just thought people around here are leading a stimulating discussion.

Best of luck all

There's quite a few similarities my friend. Pathological hatred of Jews ring any bells?!