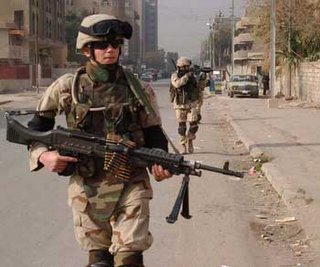 Christopher Hitchens has a brilliant analysis of the Iraqi invasion debate. Both liberals and conservatives, are running away from the issue, not only facing USA, but the world.

The debate is shrill. Democrats are harping about what led up to the war, rather than what are they going to do about the threat of Islamic. Should Iraq split, or have a federalists central government? Secular Kurdish and Iraqi face violence from Baathists and Bin Ladenists, as well violence within different Shiite sects. Can we stop it? Republicans resort to equating war hero Rep. Murtha put in the same sentence as Michael Moore. There never was a threat of a mushroom cloud from Iraq. Our soldiers are adult and intelligent, they are not demoralized by debating the war.

The debate has never been honest. I strongly recommend you read Hitchens's 11/22/05 Slate article Nowhere To Go

Thanks for stopping by! I've returned the favor!

As simple minded as some Republicans are on the issue of Iraq, their instincts, as Hitchens suggests, are correct. After consuming copious amounts of presumably avian flu free turkey yesterday, my brother and law and I discussed what he sees as damning evidence of Bush's lies and intent to go to Iraq come hook or crook, based on his "reading" (an audio book) of Woodward's "Plan of Attack." Although it was fun for me to point out that regime change in Iraq was US policy, supported by Democrats during the Clinton administration, the discussion has little relevance to the issue of "what now?"

With a malevolent Iran to the east, Baathist Syria to the west an unhelpful Saudi Arabia to the south, paranoid (of Turkmen and the designs of Turkish Kurds who want to create Kurdistan from the Eastern mountains of Turkey and part of Iraq) Turkey to the north and west, it is difficult to see how dividing the country wouldn't lead to an international conflict involving all those countries. They would fight not only for sovereignty but the oil fields of Mosul and those along the Gulf coast. Which, aside from the sectarian difference between Shiites (the most populous group), Kurds (who are also Shiite) and the Sunnis and Baathists among their ranks, is where the federalism debate is centered.

Because there is little experience with the explosive growth than can be unleashed with a market economy (if done properly), the political maneuvering now is over the oil assets of the country which reside primarily in Kurdish and non Kurdish Shiite South and east. Sunnis see their fortunes vanishing if even limited self rule is permitted.

The bin Ladenists (I like this Hitchensism) are using Baathist frustrations and fears to attempt to create anarchy. I hope Hitchens is correct about popular sentiment turning against al Zarqawi, et al. Despite all of the mistakes that have been made in the execution of the post invasion period, the administration is right to keep going until the nascent hope of democracy and capitalism are strong enough to stand in a tough region.

Could the article below on 'The Genocidal Imagination of Christopher Hitchens' be part of the 'authentic debate'?

Yes Hitchens's views should be up for debate.

sorry, 'secular kurdish and iraqi forces face violence from buddhists'? is that meant to be a joke?

OMG! Thank you for catching the typo.