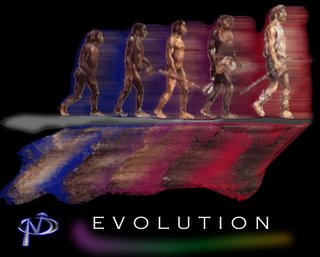 The American Museum of Natural History in New York, has curated an exciting exhibit, honoring the life of Charles Darwin. It cost $3,000,000 to organize and setup. The money has come totally from private individuals and non profits. Corporations gave 0, due to fear of attack from fundamentalist Yahoos.

At the same time in Cincinatti, Oh, the Creationist Museum, received $7,000,000 dollars in corporate donations.

The fundamentalists are louder, than their actual numbers. The majority of people want religion inside the church, not in the science classroom, or at the scientific exhibition.

I got to your blog from some Egyptian blog comment you posted, your smart comment that fundamentalists have ahigh voice and low number might not really be true otherwise Bush wouldn't have been still in power. maybe the difference in the US is almost at the 50% mark between librals and conservatives.
In egypt though and the rest of the middle east the actions by Fundamentalist like Bush (pardon me!) has pushed support towards conservative Islam far byond the 50% mark. the deal is Merging relegion with politics seems to be in fashion these days, in the US, Israel, and now in Egypt at the first semi-clean elections start.

Do you have a list of the corporations that funded the museum in Cincinatti? Walmart?? Just curious.

(hope your holiday was anything but corporate! "See ya" back in Brazil on Thursday!)

"Fallout from the corruption of secular science by the Bush administration and its religious allies continues to pile up. The latest is a particularly harmful blow: Two of the world's best geneticists will leave the National Cancer Institute and move not to Stanford University, which had heavily recruited them, but to Singapore's Institute of Molecular and Cell Biology. The reason is simple: They will face far fewer restrictions on their research, which involves stem cells.

Neal Copeland and Nancy Jenkins are a husband-wife research team. They are famous for developing methods that identify cancer-causing genes, work completed during their three decades at the Cancer Institute. Their ultimate goal is to develop drugs to block those genes; in effect, they seek a cure for cancer. They're leaving the institute because of restrictions on the use of stem cells imposed by the Bush administration. They had hoped to move to Stanford to take advantage of the $3 billion fund California voters approved for stem-cell research that circumvents the federal restrictions. Unfortunately, lawsuits by antiabortion groups have held up use of those funds. Thus the move to Singapore, where they will join geneticist Edison Liu, also formerly of the Cancer Institute.

The United States is accustomed to being the beneficiary of brain drains, but in the biological sciences that has now been reversed because of the unreasonable restrictions imposed on the use of embryonic stem cells for research. The irony in this is staggering: To prevent researchers from using surplus embryos from fertility clinics -- already slated for destruction -- opponents will forgo willingly the promise of cures for cancers and assorted other diseases that afflict millions of human beings. There are ethical considerations in this research, but they can easily be answered, if opponents were willing to engage in a dialogue. But they're not; despite their self-identification as "prolife," they'd rather see the stem cells in surplus embryos killed than kept alive and used in scientific research that might help heal people in the future."