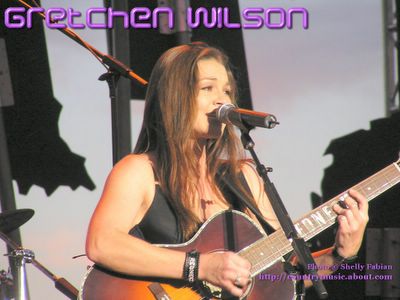 Gretchen Wilson is the top new star of country music. She was born of a mother yoo young, into poverty. She lived alone as a teen. Before music she worked in a back road bar.

Her latest album "All Jacked Up", contains a duet with Merle Haggard AKA "The Okie from Muskogee", in a song called "Politically Incorrect." Here are the lyrics:

I guess my opinion is all out of style
Aw, but don't get me started cause I can get riled
And I'll make a fight for the forefathers plan
And the world already knows where I stand

Why is that song reactionary? I'm not an addvocate of socialist realism. I believe in agit-prop art, as part of art for its own sake. I'm ok with Gretchen not expressing support in her music, with Hugo Chavez and antiimperialism. My gripe is with populism. It is associated with Paul Wellstone, Jesse Ventura, Ralph Nader, Pat Buchanon, David Dukes of KKK, Ross Perot, and a host of others. It's antielitist and anticorporate. It is not left, right or center particularly. It can be used by dictators as Juan Peron in Argentina. It appeals to a vague concept of "the people". Populists are soft historically on racism. It appeals to class, but fears class struggle. When I think of a populist, I think two things; racism and political unpredictability.

Dear Gretchen, you should know I believe in Darwin and Marx.

Thank you to the blog for starting this conversation.
Posted by Frank Partisan at 4:11 PM

I think it is one of the better descriptions of populism I've read. Rush's people are as much populists as Michael Moore's. It's the context that defines it. And, I'm fine with Gretchen Wilson, more power to her success. My only concern with the politically incorrect are those who simply want an excuse to be blatant asses to whichever group they feel offended by.

i belive that this song is a cover of a older counrty song... does anyone know the org. group that recorded this?

I'd really love to know how this song is "politically incorrect." All she does is bemoan the current notion upheld by Christian fundamentalists in our government with the full support of the Christian Coalition and the US federal government that this nation doesn't care about God anymore. Not only is that not true (according to polls, 93% of the American population considers themselves to be Christian), it is propaganda. Oh, these poor, persecuted souls.

I think you all need to chill out! I guess you don’t know about outlaw country! The song is about "underdogs"--- It’s a fact that politically un-correct underdogs don’t stand a chance in high society life; pulling 3rd shift, single moms, & farmers--these are people who aren’t born with a silver spoon in their mouths!

Perhaps you should take your poll stats, your populism, & your lack on country music knowledge & continue watching your fox, msn, & cnn for your education.