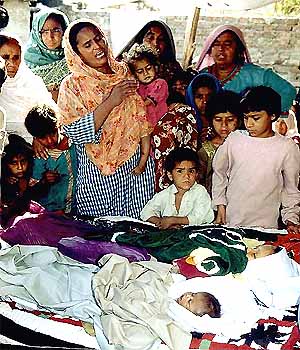 Atleast 25,000 people are dead, after the earthquake Saturday, that shattered Pakistan and parts of India and Kashmir. The United Nations through UNICEF, expects the toll to be 40,000 dead. Atleast a million people are homeless.

Building contracts in Pakistan are acquired, it is not necessarily for construction. Shoddy work is the order of the day. They skimp on concrete and bars, while paying off politicians. Villagers in Garhi Habibullah, where 200 girls and women were killed, when the girls school once 29 feet tall, collapsed to become 5 feet tall during the quake. It was the death of the village's whole generation of girls and women. At the same time, the private schools of the elite stand intact nearby.

The radios blared about the mobilization of the government to relieve suffering. Nobody came to that village.

Maqsood Rehman, a social worker who heads the charity committee at the main village mosque, sat dirty and bloody-knuckled from the 11 graves he had dug by mid-afternoon.

"This is a natural disaster," he said, "but also one made by our government."
Posted by Frank Partisan at 10:06 PM

I caught your comments on my blog, and thanks for visiting Fuzzy and Blue. I just read in The Guardian that the Pakistanis and Indians are really trying to put aside their beef w/one another and use this tragedy as a unifying force. That is all well and good and would be lovely to see, but this awful tragedy just dramatizes the incredibly brutal conditions that the poor in their nations have to face. Yes, natural disasters hit all people- regardless of wealth- but the poor are especially hard hit b/c the poor living conditions they have to begin with.

And there is nothing wrong w/ Trotsky. I think much could be learned from old Leon. I also think much could be learned from Che and Fidel. I personally hope that Chavez stays in power for a long enough time to prove to his people that improving the lives of the poor is what is best for any nation. Collective prosperity for the poorest of a nation can only benefit any nation as a whole. Both sets of my grandparents came from Romania and Italy... where they lived in abject poverty and suffered. They were only lucky enough to escape it b/c extended family members had already come to America.

Thanks for you comments.

I just wish that things get better. May Allah bless 'em all who suffered in the affrighting disaster.