The Spanish Elections and the Revolutionary Movement 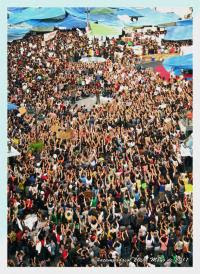 It leaps across frontier, defying all barriers, it laughs at the threats and curses of the ruling class and it sweeps aside the forces of the state. It cannot be halted. The mass protests that are spreading from one country to another have caught all the forces of the old society by surprise. They do not know how to react. If they do nothing, the movement grows, but if they attempt to crush it, it will grow much more rapidly.

The world is finally waking up to the fact that socialism doesn't work.

I think conservatives don't grasp history or economics, when they can't differentiate between social democracy and Bolshevism.

Modern communism was born from splitting from the parties in the Second International.

We all know the difference, Ren-

1. Socialism-the only form of government and economics that could ever work-if only somebody would ever give it a shot.

2.Social Democracy-A form of government that has been tried numerous times, and always makes a big mess and is a disaster every time its ever tried. It is more than ninety percent socialist in nature. What makes it fail is that less than ten percent that isn't socialist.

Correction-I was wrong, it was tried, by Lenin and Trotsky in the 1910's-20's. We all seem to forget that massive failure that led to Stalinism.

Stalinism wasn't a "massive failure." A poor, illiterate country, managed to shoot the first satellite into space. It was a degeneration, not a failure. There was continuous growth.

Yeah, Stalinism was a howling success.

I didn't say Stalinism was a massive failure, did I?

Now why do you want to portray my words as something that was the opposite of what I said?

Repeat-what Lenin and Trotsky attempted to create in the nineteen tens and twenties was a MASSIVE FAILURE. And that MASSIVE FAILURE led to Stalinism.

I guess Stalin wasn't really a Bolshevik either, even though he was on their Central Committee in 1917... evidently he was the first "National Boshevik" in "sheep's clothing". ;)

It's obviously NOT conservatives that have a problem with history...

Ren just doesn't want to admit that his heroes Lenin and Trostsky set up a system that was doomed to failure, but you can only tweak history so much. It is what it is. Socialism will lead to authoritarian dictatorship every time in ever place its tried.

I'm posting about modern Spain, and you guys all of a sudden are talking about Spain, like it was Russia 1917. It apparently isn't a capitalist country anymore.

National socialist is more correct about Stalin, than Hitler.

No, Stalin was the 1st "practcal" Boshevik nationalist. He thought he might try and "scale-up" Lenin's totalitarian economic system... something Bolshevik internationalist idiots who believe that a social compacts "must be written and the highest level and result in a mutual suicide pact involving the extinction of the entire human race at one go" refuse to contemplate.

Renegade Eye is merely a local kool-aid dispenser for a global suicide cult.