Where is North Korea Going?

This article written by Fred Weston and John Peterson in 2006, is dated, but the basic analysis is sound. With recent flare ups between North and South Korea, this article becomes relevant again. I would add since this article was written, the North Koreans removed from their constitution, all references to socialism. 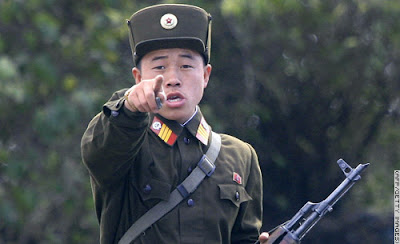 North Korea has carried out an underground nuclear test, attracting the attention of the world media and infuriating the imperialists, in particular George W Bush. What is behind this move? But more importantly, what is happening to the North Korean regime and economy? This article attempts to give some answers.

RENEGADE EYE
Posted by Frank Partisan at 12:15 AM

The current tit-for-tat and the unhinged behaviour of North Korea is a cause for serious concern, it'll be interesting to see what action, if any, the UN security council takes.

I love the "if any"... Since when "if" denotes total certitude ?

I seriously doubt that total inaction and paralysis could ever be "interesting to see"...

This article was published in 2006. I'm more interested in the attack on the South Korean ship that resulted in the deaths of a good number of South Korean Navy men. Somebody needs to take that whole fucking country out. I'd give them motherfuckers some nuclear testing they'd never fucking forget.

Clearly you're not a fan of the UN, fair enough, I suppose I was referring to what the global response will be and more importantly the response of the US and South Korea to the threat.

You seem to hate North Korea nearly as much as Sonia hates the UN? I agree that the terrible loss of South Korean life was awful, I'm not convinced that the best answer is a nuclear attack on North Korea however.

I wouldn't wipe the whole country out, but I think a targeted attack on some segments of that sorry place might be appropriate. The way things are going, they are headed towards a war, and if that ever gets started in earnest, a lot of innocent people are going to die, a lot more than would die as a result of a targeted attack, even a nuclear one, plus no telling how long a war between North-South Korea would last.

Obama would probably be sitting on his hands trying to figure out what to do, and if he did anything he would probably make things worse. This could be really bad. The only other hope is if China clamps down on the North and makes them see reason, or maybe Russia threatens them somehow, provided the North doesn't call Russia;s bluff, which is unfortunately about what it would amount to.

The fact that North Korean attacked that ship to begin with shows that they are an unreasonable group of people to begin with, and maybe some of them are just flat out crazy. There was no legitimate reason for that.

With Obama in charge, the US response to North Korea will be "we appologize for not spreading our racist ass cheeks wide enough to properly welcome your progressive socialist cock inside our dirty imperialist ass".

As for the South Korean response, it would be a huge improvement if they heroically decided not to swallow this time.

Your loathing of Obama is de rigueur, the suggestion that some kind of nuclear strike on North Korea is a good option is madness to me.

Pagan: You're losing it.

The North Koreans have suicide pacts. They would attack Tokyo in a heartbeat.

I think there might be a power struggle in North Korea, or a show of force by the military.

In North Korea the proclaimed leading force in society is the military, not the working class as Marxists advocate.

The extreme right like you and the extreme left like those who believe North Korea is healthy socialism, believe an attack is possible. North Korea will be capitalist soon, by China looding the country with cheap goods. The Stalinist bureaucracy can easily transition to corporate heads.

Any war would bring unwanted refugees.

Daniel: I doubt that the UN will play any role. If anyone could, it would be China.

Sonia: I have to agree, the UN will play no role.

They attacked a Navy ship and killed people. That's going past the point where strong diplomacy is an option. If China can reign them in for good that would be the preferable option, but otherwise, what is left? They can't be allowed to get away with this. They are threatening war against South Korea just because South Korea is ending trade with them. What did they expect? Those fuckers are crazy. There's only one way to deal with a rabid dog.

Pagan: Going to war over an injustice is a novel idea. It's not how wars happen.

What more reason do you need than attacking a Navy ship resulting in the deaths of personnel, then threatening war over suspension of trade?

The North is the one acting warlike. The South has exercised restraint. What do you expect them to put up with?

That’s not really the case, as history tells us. Just for instance:

Attacks on Naval vessels were what lead to full scale conflict in Vietnam. It was all a lie but nonetheless.

Attacks on vessels were instrumental in bringing the US into WW1. Also based upon lies, but still nonetheless.

An attack on a Naval vessel was instrumental in bringing about the US-Spanish war. That was most likely based upon lies too but nonetheless.

So to follow your logic, there won't be a war, since North Korea actually did sink the ship.

There would only be war if North Korea had sunk its own ship and falsely blamed South Korea... (or vice versa)

Not even remotely Sonia; it is in fact your own logic which would be why you said it and I didn’t.

You seem to be very argumentative just for the sake of it.

To all intents and purposes, North Korea's actions are already tantamount to a declaration of war as far as I'm concerned.

The only things I want to know are-where was the ship when it was attacked? Was it in South Korean or North Korean waters, or was it technically in international seas?

Who the hell does the South Korean President think he is, Barak Obama or something?

"You seem to be very argumentative just for the sake of it."

We must go easy on Sonia now, poor thing. I've recently discovered she is actually a one hundred plus year old woman with strong emotional ties to her past in Czarist Russia, so let's cut her some slack, as her feelings are very easily hurt.

I 've added your blog to My Favorite Blogs at

http://nonsense-verse.blogspot.com/ So would you put my blog too, on you...

you can get healthy traffic from us and our visitors can get relative and useful information form your site.

Hope you would add my blog.
Thanks a lot.Keep blogging....

A fabrication for a war, is different than a cause of war. In Iraq there was supposedly WMDs. If the US believed for a minute there was WMDs, they never would have attacked.

The Gulf of Tonkin incident was fabricated. It was a rationale for what was happening.

Lawrence: I'll link to you later in the day.

Rog: North Korea did deny involvement. I posted this, more to explain my position on North Korea.

Pagan: If there was going to be a Korean War, it would have happened sometime in this 50 year period of truce.

North Korea is moving to capitalism. All references to socialism, have been taken out of the constitution.

Why war, when flooding the country with cheap goods will work.

Oh, the horror of it! Those sadistic bastards! Have they no decency left?

Ren - I was just making a general comment, reading the mainstream media it seems North Korea have been found guilty already.
However I believe that someone else has carried this out in order to "stitch up" North Korea.

Sonia is not correct at all. That was not my logic but hers.

My point was pretty obvious: You say countries don’t go to war for attacks on naval vessels - “It's not how wars happen” - and I demonstrated that quite clearly they do, even if it later emerges that the circumstances were contrived.

I wonder if the US troops stationed near the border have been put on enhanced alert status of some kind. You would think they would be. If they are attacked, and there are casualties, Obama will probably implode from the indecision as to how to handle it.

I bet he'll give the North Koreans a good stern tongue-lashing, then probably ask them to swear scout's honor they'll never do it again. Well, strike that, if he invokes the Scouts he'll get in trouble with the gay lobby.

I 've added your blog to My Blog Roll at http://hurricanenewsupdates.blogspot.com/ So would you put my blog too, on you...

Hope you would add my blog.
Thanks a lot.

Lawrence: I added your blog to my blogroll months ago.

Sentinel: There is a difference between a war's cause, and a precipitating incident.

Rog: I can't prove North Korea did it, on the other hand I don't see conspiracies.

Pagan: The US military is stuck in Iraq and Afghanistan for awhile.

Are you joking? They actually PRODUCE those cheap goods and they flood the markets (foreign and domestic) with them.

I think Ren means that China is more selective as far as what goods they import into their country, Sonia. Producing cheap goods for export is one thing, allowing your market to be flooded with cheap goods from other places is a different matter. China is building their economy and doesn't want real competition from outside sources.

Your Southern slave analogy is out of place here. There is an analogy, but you missed the target. The correct analogy is the South had a vested interest in maintaining the status quo of slavery to protect their economy, not to protect the slaves, which were little more than livestock to them. Well cared for livestock in most cases, but livestock all the same. Once the slave trade ended in earnest, many plantation owners even selectively bred them like livestock in some cases, and encouraged large families, unlike the present day Chinese.

You might say this enabled them to flood the agricultural markets of the North with "cheap" goods that Northern farms were hard pressed to compete with, while manufacturers in the North-call them the Wal-Marts of their day-had a vested interest in the status quo as well. They also had strong support from Wall Street.

It's worth realizing that China DOES NOT want a united Korea.

They'll keep the lid on this but there isn't going to be any change in the status quo.