The fall of the Berlin Wall: 20 Years Later 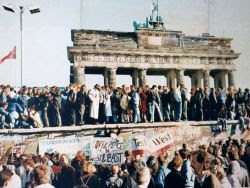 Twenty years ago as the Berlin Wall came tumbling down the bourgeoisie in the west was euphoric, rejoicing at the “fall of communism”. Twenty years later things look very different as capitalism has entered its most severe crisis since 1929. Now a majority in former East Germany votes for the left and harks back to what was positive about the planned economy. After rejecting Stalinism, they have now had a taste of capitalism, and the conclusion drawn is that socialism is better than capitalism.

RENEGADE EYE
Posted by Frank Partisan at 12:50 AM

Europe's economy is planned, albeit privately owned. It is the most regulated market in the world that is privately owned. When East and West Germany united, Germany veered more towards the left as a result, both economically and politically.

No, it's not "communist" in the jack-boot sense, but in regards to social policy, it is getting more and more that way every day.

The irony is, many of the Germans from the East (such as Merkel) are probably more conservative and to the right than their cousins in the West.

West German politicians seem to have gone out of their way to make the East fell at home, in all the ways that the East Germans wanted and expected.

You have an economy that, like in most of the rest of Europe, is subsidized by government, even if it is technically privately owned, you have exorbitant tax rates throughout Europe to pay for cradle-to-the-grave social programs and entitlements, and you have a pc social culture that can land you in jail for hate speech if you sneeze and fail to say gesundheit.

Which side did that fucking wall fall over from again?

...anything to make the West lower its' guard, and lower it, they did.

Pagan: East Germany is moving left. There is a new party made up of ex-communists and left social democrats that made it so no bourgeois party had the majority.

The dominate part of the European economy is capitalist.

FJ: It was supposed to be the end of history.

HAHAHHAHAHAHAHHAHAHAAAHHHAHAHAHHA... (pausing for breath)... HAHAHAHHHAHAAAHAHHAHHAHAHHHHAHAHAHAHAHAHA... (picking myself up from the floor and drying myself off...)

Which part of 'engage brain before keyboard' did you forget, Pagan? And do you forever want to walk around with a dunce cap on your head?

With such mythological views about Europe still banging around in the New World, it should come as no surprise that Obama gets called a 'Socialist', 'Communist' (or even 'Hitler', of course...)

There is nothing planned about European economies. We do have a much larger body of regulation regarding worker's rights and protection, which is a direct result of Europe's long struggle to shake off the yoke of Feudalism (simply put). Many of these social values and concepts have been embraced also by the US of A and RoW.

In addition we have a larger public sector, typically for the health, education and public transport sectors. On the whole, that works very well in most European countries. Attempts at privatising for instance the railways in Britain, after decades of deliberate neglect (absence of public funds, not being spent on upgrades and maintenance), were an abject failure we're now completely stuck with.

"You have an economy that, like in most of the rest of Europe, is subsidized by government, even if it is technically privately owned, you have exorbitant tax rates throughout Europe to pay for cradle-to-the-grave social programs and entitlements, and you have a pc social culture that can land you in jail for hate speech if you sneeze and fail to say gesundheit."

You are a walking, talking caricature... of a moronic Meircan.

Parts of our agriculture (and sometimes other industries) are indeed subsidised, for good reasons (but impossible to explain to a mouse brain like you) and that too works more or less fine. Other than that, like I said, we do have public sectors that are paid for by tax payers money.

As regards, our 'exorbitant tax rates', you also need to consider what we get in return: most European countries have world-class health care systems for instance. And very decent free public schooling.

For those who feel too uppity to have their brood share the air with common mortals, or prefer to pay through the nose for private health care or private transport, these options are open to anyone and catered for by private companies.

As regards a 'PC social culture', it's not very different from the US of A. We have the necessary laws to prevent discrimination against minorities, like in the US. Suppression of opinion happens to some degree everywhere, different places and cultures adopt different tactics, that's all.

But I know that those who complain about 'PC' are the ones that would like us to return to the Dark Ages, when any discrimination against any minority group perceived to be doing wrong based on the whimsical and anachronistic belief-systems of the majority group was socially acceptable, possibly even the norm. Well Pagan, please accept we're not all Neanderthals and that some of us do embrace Enlightenment Values.

Ren, I don't understand why you tolerate these trolls: freedom of speech too has its drawbacks and giving imbeciles like Pagan and FJ a platform is definitely one of them... They contribute to bringing this forum down. Where are the progressives here? Spending their time productively elsewhere is my best guess...

The Berlin wall fell as it was a visible sign of oppression from an overtly oppressive regime and it is in human nature to resist such tangible tyranny.

Whereas the EU is a covert PC agenderist oppression - a staging post in a global government - dressed up as a benign pan-European committee ostensibly run by elected representatives and as such has been able to manifest, step by step, creep by creep, into a full blown super state from its first outing as the purely market related EEC (of which the UK joined and no consent for this current federation has been given) replete with its own President and Foreign minister, neither of whom will be elected by the people for the people to complement the real unelected bureaucratic rulers who now have an almost complete grip on every facet of every member states affairs, from the economy to immigration, from justice to agriculture, from education to ‘health and safety’.

It is a gigantic, corrupt, agenda ridden affront to sovereignty, democracy and the real interests of the people it purports to represent.

A formidable tyranny in the making.

So of course, Gert loves it.

A few other points to note:


“I don't understand why you tolerate these trolls”

You have got some enormous front Gertrude; you are the very essence of a troll: Just look at how you choose to respond to someone else’s opinion here, for a start.

As we are all fully aware now by numerous examples, you are extremely well known in blogsphere as an hysterical troll who succumbs to mental breakdowns when he cannot flush all dissent down the memory hole.


“freedom of speech too has its drawbacks”

But you care naught for freedom of speech, its just lip service in pursuit of destroying it.

You despise freedom of speech.


“They contribute to bringing this forum down”

As opposed to what exactly, in any case? Your wonderfully eloquent and immensely beneficial contributions like this:


“HAHAHHAHAHAHAHHAHAHAAAHHHAHAHAHHA... (pausing for breath)... HAHAHAHHHAHAAAHAHHAHHAHAHHHHAHAHAHAHAHAHA... (picking myself up from the floor and drying myself off...)

Which part of 'engage brain before keyboard' did you forget, Pagan? And do you forever want to walk around with a dunce cap on your head?”


“Where are the progressives here? Spending their time productively elsewhere is my best guess...”

Well they are not on your webrag are they Gertrude?!

And you do practice censorship!! So what are you babbling on about?

The measure of your intelligence and sheer hypocrisy, Gerty, can be gleaned from the obligatory usage of your two favorite terms of personal abuse for dissenters: Moron and Imbecile.

Both are actually Eugenic terms, coined by Henry Herbert Goddard!! You are espousing eugenic theory every time you abuse someone with them. And that is often.

What a clueless muppet you are Gertrude.

I’ll pay for a week’s supply of your head meds if you can tell me who coined your favorite political terms of abuse: ‘racist’ ‘sexist’ ‘homophobe’ ‘islamophobe’…

I'm starting to think Gert coined them. If not, he damn sure uses them enough he owes somebody a shitload in royalties.

Here's an intelligent comment for you. Europe sucks. That's why we Meircans for the most part don't want to be like you, and hopefully never will. After all, we Meircans made our mark on the world stage precisely because we left your kind an ocean away and centuries behind.

You can try to play catch up all you want, you'll never quite make it to our level, will you boy?

Admittedly, if you would listen to the handful of actually intelligent people in your countries, people like Sentinel, you might eventually make it, but poor chaps, instead of that, you turn to the people who promise you the most goodies while they're massaging your broken egos and simultaneously picking your pockets-in your case probably with the same hand at the same time.

How many people again can afford this private insurance that is supposedly available? I am going to guess not very many. The tax rate has probably made private insurance prohibitively expensive for all but the upper crust, so what good is that?

Your whole economy is subsidized. The only part of your damned economy that ain't subsidized is your military budget. That's because the US takes care of that little effort. Let NATO go the way of the Dodo bird, as it should, and let the US take it's presence from Europe, and let's watch your little dream world come crashing down around you.

Thanks for playing, Gurdy, I'm signing off for now. I don't want to say mean things to you, I know you can't help how you act. After all, you are not a real person, you are a Belgian.