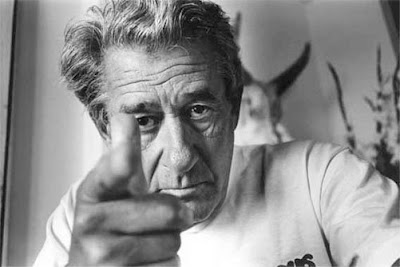 Most fashion photography is forgetable. This post is about an artist; Helmut Newton.

He brought sex and theater into fashion photography. A German-Jew who fled Nazism in Germany, with his family in 1938. His homage to the Berlin cabaret life, continued in his work for periodicals as Vogue, Harpers Bazaar, and Playboy.

The Newton tie to cinema, is through the movie The Blue Angel (1931), with Emil Jannings and sultry Marlene Dieterich, the Wiemar masterpiece. His photography subjects were often charactures of that movie. The Amazon women and the repressed men was often a theme in his pictures.

Newton died in 2004, after driving a car into a wall at his West Los Angeles base at Chateau Marmott, after an apparent heart attack. 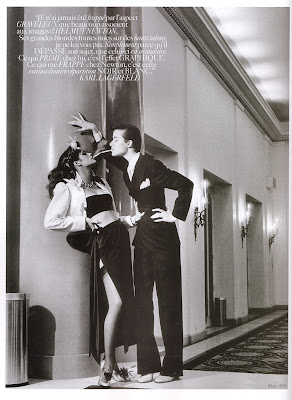 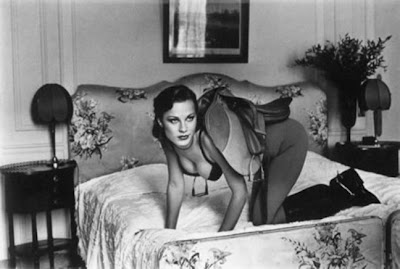 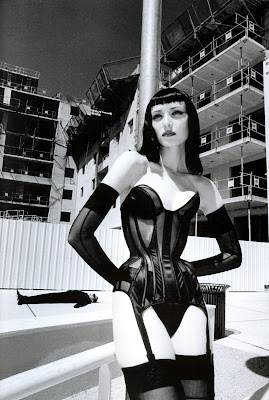 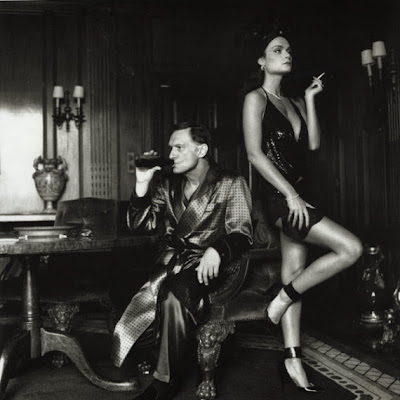 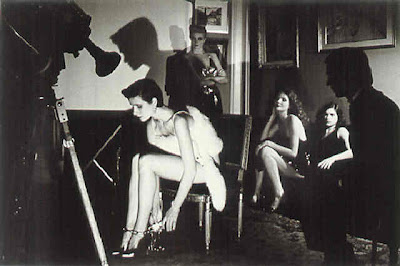 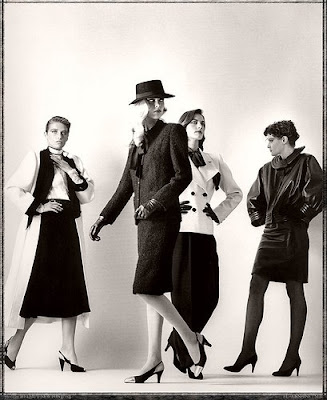 RENEGADE EYE
Posted by Frank Partisan at 12:42 AM

Weimar. And we all remember what happened to them.

Gert ! You Make "A Dirty Old Man" Sound Like A Bad Thing!
It always amazes me how a good photographer can tease so many secrets out of his /her subjects.

Ash: The comment box at your blog, doesn't open on my computer.

Gert: I saw a documentary about Newton, where he asked a model if he could feel her breasts, even though she will not be hired?

Jams: He had contempt for fashion photography. His pix hardly highlighted clothes.

He printed his pix on paper that dissolved in time, when he did commercial work.

It's funny, I just learnt that my partner Eva-jane comes from a long line of photographers due to her father doing some extensive family research.

Although she is an actor by trade she has a natural talent for taking photos and it is clear much of this has been passed on through the blood line.

Graeme: I used to be more interested in photography. I judge them hard.

Actually, though this type of photography has it's own artistic charms, the best photography isn't stage-managed as such, but is taken on the fly, snapshots of real life taken in the moment. However, it takes a really keenly developed sense to know when to take the best shot at the exact second. It's actually something that is almost an instinct, rather than planned out.

Horses for courses, to say that on the fly photography is better is not fair on those that stage or capture great moments, that is some of the art of the photographer.

Photo jounralism is one thing but the art of setting up a good photo is another.

And I'm not trying to put that down, either, but there is a very big difference between "staging" great moments and the "capture" of them. To "capture" a great moment is a great rarity in occurence. It requires a sense attunement with the moment that is, as I said, almost instinctual in nature. To think about it, to plan it out, is missing the point. It's more a relexive moment, when eye, hand, and camera react to a split second.

Once that moment is passed, it is gone forever, never to be repeated, and next to impossible to "stage". The best such attempts to do so would be little more than a good counterfeit.

There is nothing wrong with the other style of photography, just a vast difference. Where one strives to create art from inspiration, the other recognizes the existence of art as a natural occurrence=almost as a force of nature.

It's clear which one you have a preference for though wouldn't you say?

Some actors are good at impro but give them script and they struggle, or vica versa. Some are good at both, eithe way, it's all good.

A well created image can be as powerful as an on the spot snatch of something and vica versa depending upon taste and composition.

That's true too. Another use of photography in art is as a tool of a painter, where instead of having models pose for indeterminate lengths of time, the artist captures the exact pose he or she desires, and then uses the photograph as the "model" for that which he wishes to create.

It's more complex than I have a preference of one for another, I just appreciate the rarity involved in capturing a moment in time.

When I see pictures of city buildings taken a century or more ago, I automatically wonder what was going on in some of the rooms in those buildings at the exact time those pictures were taken, and what if they had been taken with the comparatively greater enhanced photographic technology we have today as opposed to what was then available. You know, what kind of snippets of everyday life might have been captured at just such and such a moment. I guess that's the reason for my fascination with that style of photography. It's not that I don't appreciate the other kind, it's just that I have a sense of wonder at the intimations of immortality contained in the one form, of capturing a moment in a life that is otherwise quickly and forever forgotten.

Okay, it just sounds like you have a preference to me.

I got inspired by Helmut Newton's photogrphy as soon as I laid my eyes on one of his photos. Since then, I said to myself that I have to try this and make it my hobby. I was chatting with one of my brides, Tania, about it and she said that she will be more then happy to work with me on this project. Here are the results. To see more....... http://www.georgefoto.com/#Blog/49/