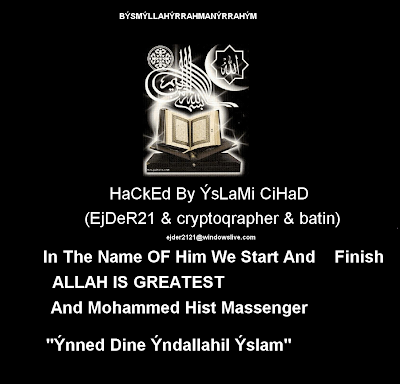 The website Blogrolling.com was hacked on October 08th, with people finding the homepage with Islamist messages (see picture). Blogrolling is a site that supplies script for saving links, alphabetizing them, and getting notice of updates.

Yesterday it looked like Blogrolling was back up. Instead every link led to a certain Laura's blog, which is down now.

This is the second time Blogrolling was hacked.

For now all my blog links are gone. I used the updated blog feature often to visit and encourage blogs, that don't update often.

RENEGADE EYE
Posted by Frank Partisan at 11:06 AM

Why would a site that provides these services be hacked?

As are so many of the regime's actions. Not that I'm saying the regime did this. But that mindset.

It has announced it's auctioning off slots at major airports, particularly JFK, which is already a miserable experience. Why? Every expert in this area says this is a disaster that makes the current disasters worse. It's also illegal. The feds don't have control over cities' commercial airports. It's just mean. And stupid.

i have google reader because if you have new blogger- you have to have a google account. i am not enamored with google because of its aggregating info to pass along to the gov't- but hey, is there a database we aren't in these days? anyhoo- either the blogger list or the google reader- or both are useful.

Blogrolling is up, still in need of repair.

Foxessa: It is meaningless. It's the second time it was done.

I don't understand what you said about the airport.

Cloud: My blog's template isn't made anymore. It's incompadable with the new Blogger. I saw another template I like, but don't know how to transfer it. It's outside the ones offered by Blogger.

It appears that the admins at blogrolling.com really don't know how to fix this problem. Perhaps their web hosting software was attacked and not just their website.

What I meant is this:

[ The Port Authority and an airlines trade group say they will go to court to stop the Bush administration from auctioning off flight slots at New York's three major airports. The Port Authority of New York & New Jersey and the Air Transport Association said Thursday they would go to court to block the U.S. Department of Transportation's decision to move ahead with its controversial auction of flight slots at New York's three largest airports. [1] The government will gradually auction up to 10 percent of the landing and takeoff slots the airlines currently operate at the airports. The Air Transport Association, which represents commercial air carriers, said they will ask a judge to stop the government. The Port Authority of New York and New Jersey, which operates the city's airports, has already joined a lawsuit over the issue and vowed to block any planes using auction slots from arriving at their terminals. The Port Authority "will take immediate action to stop this plan," said executive director Chris Ward.[2]

DOT and major airlines continue to butt heads on the issue, which has spurred an Air Transport Association-led lawsuit and a ruling by the U.S. Government Accountability Office, Congress' investigative arm, that DOT does not have the legal authority to auction slots ( BTNonline, Oct. 6). Despite the mounting opposition, DOT today defined final plans to gradually auction "up to 10 percent of the landing and takeoff slots these airlines currently operate free of charge today" at John F. Kennedy, LaGuardia and Newark airports. DOT said the rules call for airlines to maintain a 10-year ownership of "the vast majority of FAA slots they currently operate."[3] Transportation Secretary Mary Peters announced final rules Thursday to begin auctioning takeoff and landing "slots" at the three major New York-area airports: John F. Kennedy, LaGuardia, and Newark-Liberty. Under her plan, the auction winners would be announced Jan. 12, about a week before George W. Bush leaves office. Federal authorities are focused on New York's airspace because roughly two-thirds of flight delays around the country are caused by backups at those airports.[2] WASHINGTON (AP) — Federal officials are pushing ahead with an experiment to reduce rampant flight delays around the nation by auctioning off takeoff and landing times at New York City-area airports, where most delays begin. Bush administration officials are racing to get the plan in place before they leave office in three months; airlines and airports are sprinting to court to stop them.[2]

Federal transportation planners believe an orderly allocation of slots at New York's LaGuardia and John F. Kennedy airports and Newark airport in New Jersey would over time lead to more efficient operations by airlines and fewer delays. For instance, the administration envisions carriers using bigger aircraft if they are forced to operate fewer flights. This, officials argue, would reduce the number of slots needed and free up others for new entrants.[4] WASHINGTON - The Bush administration said today it would proceed with limited auctions of takeoff and landing slots at John F. Kennedy and LaGuardia airports in New York and Newark Liberty International in New Jersey.[5] The slots are scheduled to be sold on Jan. 12. Their action comes in response to Transportation Secretary Mary Peters' announcement that the Bush administration is pushing ahead with its auction of takeoff and landing slots at LaGuardia Airport, John F. Kennedy International Airport and Newark Liberty Airport in New Jersey.[1]

They've made that clear to the administration in the past and some lawmakers are renewing their objections today, after the administration announced it will proceed with limited auctions of takeoff and landing slots at John F. Kennedy and LaGuardia airports in New York and Liberty International in Newark, N.J.[6] ]

My agency was hacked by a group like this or possibly this same group. It's the same pointless spreading of misery.

They are not able able to hack into the sites, government agencies or oppressive corporations they are angry with. They basically attack small companies or websites whose security is less than it should be or who cannot afford the best security.

It seems like sort of the same mentality as sending packets of viruses out randomly and trying to hurt as many people as possible.

Thanks for the info.
We didn't see that when we visited.
We were getting spotty info from Blogrolling but now you have given us something of substance.

What Crap!
This should be punishable by a Firing Squad or worse! :-)

Keep up the good work!

Hacker Forums: I think you are correct about their software.

Foxessa: Thank you for the info.

Chris: You should show that around. Maria and Foxessa would get a kick out of that.

Papundits: Thank you for visiting.

Remind to send my resume to blogrolling, they surely need a new security expert ;)
PS: hacking has often no political motivation.

I think this was probably the work of a former Blogrolling technician, somebody that was probably canned at some point.

I'm doe with Blogrolling. It's now off my blog. I'm just going to make my own blogroll with Blogger's widget function. In act, I already have, I'm just going to add the blogs back little by little. Yours is already back on Ren. I've got Sonia listed as Sonia Belle, The Naked And Sun-Wrinkled