Some of the films mentioned haven't opened yet. I often see movies at screenings, before they open in theaters. I'm using a five star rating system. 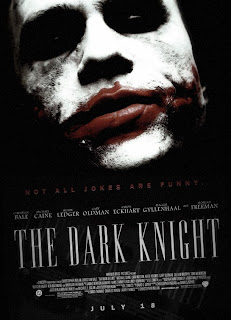 This movie is beyond what can be expected from a superhero movie. It's timely, complex and dark. This film will go down in history, longer than its genre.

The real star of the movie is Heath Ledger. His Joker makes Jack Nicholson's seem as child's play. It is a dark, brilliant and nihilistic portrayal. Ledger is guaranteed an Oscar, and it deserved. When Joker explains while in custody about planned violence against unplanned, and what it means to a society, it's chilling.

Christian Bale as Batman, is a tormented soul. He is sworn to fight evil. This Batman is unsure if it is worth it, if the fight can end. In order to fight evil, do you have to indulge in it? 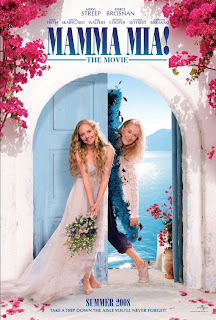 This musical from the stage play with the same name works. It is one of the most simply fun films you'll see. Abba's music works great with the story and pacing.

Meryl Streep stole the show. She shines in musicals, as she does in every role. It's Meryl Streep, in a way you can't imagine. Pierce Brosnan can't carry a tune. The movie is so much fun that who cares.

This is the story: Donna's daughter Sophie is getting married. To the buff-looking Sky. Only – where's her dad? She's never met him. A sneak-peek at Mom's diary shows Mom had three lovers before Sophie was born and Sophie secretly invites all of them. This is a film of threesomes. Three past lovers (Sam, Bill and Harry). Three close friends (Donna and two best pals). And, not to be outdone, Sophie meets up with two other young girls at the start of the film. 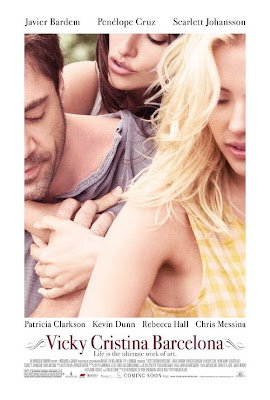 Two girlfriends on vacation in Barcelona, get involved with a Spanish painter, unaware his volatile ex-wife is about to appear.

One gf is conservative and pragmatic (Rebecca Hall), and the other is Bohemian and care free (Scarlett Johansson). They become involved with artist Javier Bardem. Lingering is Penelope Cruz, the crazy ex-wife.

This film uses a narrator to move the story.

I enjoyed this film. In the back of my mind Woody was living vicariously through Bardem. 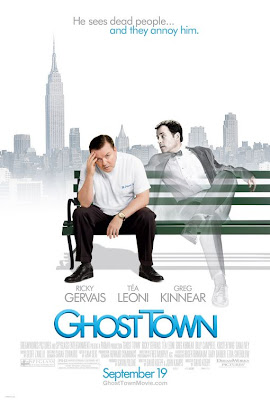 This film reminds me as a cross between "Topper" and "The Sixth Sense."

A dentist who is lacking in empathy towards everyone dies for a few minutes and is revived. He now has the ability to see annoying dead people, who still have souls on Earth, because issues in their lives are not resolved. To get to the other life, they need to resolve these issues. The dentist can help them, because he's able to see them. One ghost played by Greg Kinnear is particularly aggressive. Agreeing to help Kinnear, he gets involved in a love triangle. With Ricky Gervais, Greg Kinnear and Tea Leoni. A fun time.

This film opens in September. 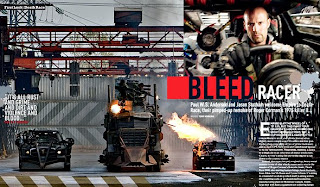 One of the producers is Roger Corman.

Jason Statham plays a former auto racer, who was framed for his wife's murder. This takes place in the future, and all prisons are under private enterprise. The warden is the producer of a pay per view show, featuring prisoners in auto races to the death. This is a revenge picture. Great for what it's. 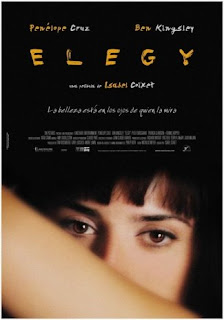 Starring Academy Award®-winner Ben Kingsley and Oscar®-nominee Penelope Cruz, with extraordinary supporting performances from Dennis Hopper, Patricia Clarkson and Peter Sarsgaard, Elegy is based on Pulitzer Prize-winner Philip Roths short novel The Dying Animal. I copied that to do this film justice. I expect Ben Kingsley to be nominated best actor, and Penelope Cruz to get some nomination as well.

Did I mention Penelope Cruz is topless?

I can't say I though much of the Dark Knight. It had some severe problems.

1. Muddled script - Very contrived. It did stage a perfect resolution of the Prisoner's Dilemma which would have been worth highlighting in today's foreign policy standoffs but it was just busy to get on to the next special effect.

2. Lousy composition -- Notice that for a film that had a fair amount of dialogue that all you ever get filmed are reversals with a boring background? Was there a two shot in the entire film? No, and that's because Christian Bale is a freaking joke as an actor. Can't afford to put him in a scene where he might need to actually react.

3. When the Heath Ledger tells Batman "We need the each other" a good script would have replied "I wish I could quit you".

The pencil bit was very derivative. To see it done with serious style, only with a chopstick, try Takeshi Kitano's masterpiece, "Hana-Bi".

As for me, if the Joker leads a chase through town causing mayhem and killing cops and he's lying in the street, I don't arrest him. I blow his head in half.

Anyway, technically this film was crap. Primarily because the director is a no talent geek making films for bored suburban white bread.

I can't wait to see a number of these. Maybe one of them this weekend...hope you are well. Thanks for the review. Lucky you that you get to see the previews.

Ducky: I think Batman played straightman to Joker. Bale atleast was someone who couldn't upstage Ledger. Ledger has best actor wrapped up this year.

The director directed in 2000 "Memento." That was interesting.

Considering what is produced, with even the art films trite, atleast this Batman touched on some moral dillemas.

Several screenings can be found at www.filmmetro.com. You need to register to get tix.

In each of these films there are several of my favorite actors and actresses, I am sure that I like everything.
I like them more when passing through cable TV, in cinemas long cold, I do not like to go to the movies alone, so I hope another year or so to see them on television via satellite or cable and feel VO Spanish with subtitles
Tonight I saw "How to kill your neighbor's dog" by Kenneth Branagh
Lynn Redgrave
Robin Wright Penn
I love cinema

Woody Allen likes Barcelona, almost as much as New York.

hi there!
i've watched some short parts of the dark knight on satellite but not the complete one, actually i'm not interested in that so much.
thank u for visiting my blog.
hope to be ur friend.
bye 4 now

Nice to see someone on the left not labelling The Dark Knight as fascist propaganda :)

Farida: I hope you visit often. I'm sure we'll be talking about Afghanistan here.

Vicky: Many on the left, particularly left liberals, are clueless about fascism.

Since Ren is commenting on film, time to get serious and get into solid leftist points of view.

Most of the remaining films of Chris Marker (except "Grin Without a Cat", damnit) have been released recently in very good prints.

I consider anything by Marker to be well worthwhile but I would especially draw attention to "The Last Bolshevik", his study of Aleksandr Medvedkin. "The Sixth Side of the Pentagon" is a good place to start if you are not familiar with Marker or "La Jetee" his homage to Hitchcock's "Vertigo".

Also finally available outside institutional screening are Fred Wiseman's documentaries. Brilliant all but some suggestions:
"High School" - Wiseman only used non-diegetic sound once, when he opened his look at the American high school to Otis Redding's "Dock of the Bay". Shattering.

"Welfare" - The monumental difficulty of administering a system as complex as public welfare. A film that would give honest right wingers pause when they criticize the system for flaws.

"Belfast Maine" - Beautiful takes of a baker early in the morning stocking the shelves and the process in a packaged fish plant say as much about labor as a lot of Engels.
Can you make a visually stimulating moving film sequence of a man making chocolate donuts in near silence? If you are the genius that is Fred Wiseman, yes.

Ducky: On the left, the biggest impact they made in film, was in the area of writing. That is why 1940s movies were generally better written than 1950s movies.

They defined montage editing among other advances.

It isn't well realized how radical the advances in various arts were in the early days of the soviet revolution.

It's interesting that under the capitalist studio system America managed to drag up the rear of film making nations.

Ducky: With digital photography available in cell phones, still photography is having a revolution, because it's so democratic, and a crisis if you are professional. Nobody is impressed with darkrooms anymore. Look what Myspace has done with portraiture.

Digital movie cameras are changing aesthetics as well. Youth watch Youtube, rather than TV as their parents did.

For now cinema is dominated by older directors as Woody Allen. When you go to the cinema, it's still movies as you know it.

When you watch a music video, you take montage for granted.

Montage is the perfect form for postmodernism.