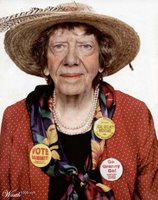 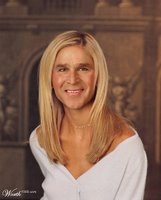 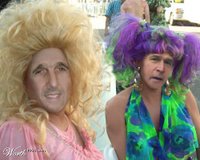 Did you ever check out the Shut Down The War Machine campaign? I was interested in hearing back from you on it.

Oh dear Ren some of these guys really could have made more of an effort. I just see bad hair and bad clothes!

Now I can't look at the famous actresses in the same way! Damn you!! :)

Sorry for hijacking the thread, but your boy Hugo is making some interesting moves. He's confiscated oil companies, golf courses, he is pulling the license of the most influential television station, confiscating the electric and telephone companies. He has jailed political opposition and fired those who won't go along with the private property confiscations.

The Venezuelan stock market has lost 16% since his "re-election" that not even the European Union would certify because of the irregularities. He is systematically eliminating any voices of opposition with his secret police and army. He has Cuban "advisors" to promote his propoganda and he has met with Ahmadenijad (who also met with Ortega).

This is the beginning of a ruling elite with wealth and power and an impoverished population. They will be able to hang on for a while because of the oil revenue, but without a "profit incentive" it won't be able to sustain the population long.

Only a coup will be able to address the discontent that will come, but he has surrounded himself with socialists so they will all have to suffer together.

My but Colin Powell is glowing in baby pink, no?
Actually my favorite picture of Powell has him surroundered by a sea of Neo-Cons while pointing his finger like he is shooting an imaginary gun with the words "Fo-Shizzle" underneath.

jimmy carter sure is homely

The stupid US administration were doing even worse in Latin America

There be some mighty fine bitches!

RE: Your post on my blog/ We've had mass demonstrations, they do nothing. A general strike is the only thing that can really stop this war. Workers' power can shut it down, liberals in a grassy field in DC can't.

CB: At this point, all that is happening in Venezuela, is at a rhetoric level.

The shareholders in the media company, are being bought out. It actually is Chavez siding with a Spanish company to take it over, rather than a Mexican media enterprise.

The Bush with the long blond hair looks suspicously like Ann Coulter. Hell, Ren, you might have inadverdantly discovered the secret of the "Adam's Apple".

Bush as a woman in the white dress looks almost attractive. Except for the 5 o'clock shadow.

i am sufficiently grossed out- but amused at the same time :)

Someone's been busy digitally re-arranging with Photoshop. I like Jimmy Carter in the peace-nik outfit.

Who is the last one in the purole hair?
CB: Maybe time for a little Bay of Pigs operation before the dominoes start falling? Where do you get your information? Not Ollie North?

A. He renogotiated the contracts with the oil majors to make PDVSA the majority partner and get higher royalties.( like we are seeing here in the US)
B. The mayor of Caracas wanted to "liberate" the golf course, Chavez blocked it.
C.He is paying for the electric and phone companies, which were public until 1997
D.The political opposition was jailed because they broke the law, plenty still live in freedom.
E.Over 100 independent organizations certified election results
F.James Baker advised Bush to meet with Ahmadenijad but he is to stupid.

You and Negroponte best keep your hands off Venezuela, as bad as you want that oil CB.

Comrade Ren! Sorry this is sooo off topic, but someone on my blog is asking what happened to Bob Avakian of RCP 'fame'/ It's in the second comment on the current posts.

By the way, I changed my email address and can't find yours...:-(

With enough liquor in your system, Bill Clinton could be considered hot.