Thank you everyone for such a great welcome. And a special thank you to Renegade Eye for inviting me to his blog. I never knew that blogging connected so many people. The idea for Latin America Activism is to archive writing, reports and photos. Much of the work is related to Grupo Alavío, direct action and video collective. Social movements 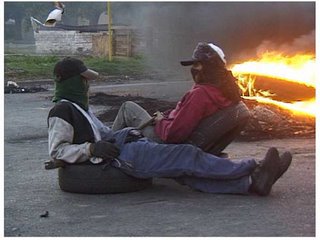 in Argentina are witnessing an exciting but very difficult moment. With increasing attacks from the far right and the current govenrment progressive-repressive policies, activists are facing threats and increasing challenges. In the next coming months I will be producing many articles and radio stories which will be featured on Renegade Eye and Latin America Activism. I especially want to invite readers to visit Grupo Alavío's new community internet tv site, Ágora TV. This is the first site of its kind in Latin America.

I look forward to posting and comments.

Avío m, preparation, provision; picnic lunch; money advancd (to miners or laborers); pl Inf. equipment, tools. During the beginning of the 20th century in laborers often carried an avío with what provisions they needed when traveling in the countryside. They would travel from harvest to harvest to work on different plantations and farms. These workers, many of who were immigrants, carried a tradition of free worker or working only when they needed to. These workers were called crotos (English translation Hobos). They got this name because a 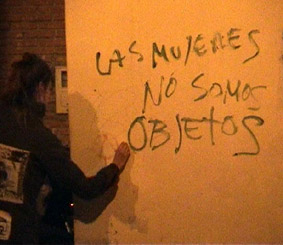 government official named Croto passed a law to permit these workers to ride free on cargo trains. Along with food and clothes, many crotos carried inside their avío anarchist literature, newspapers and pamphlets for the release of political prisoners. They would distribute these materials among fellow workers to raise consciousness of the exploitation by the boss and to organize. Al in Spanish means to the. Alavío is a call out to take to the road. A summon to action. A call for the workers to strike.

Grupo Alavío is a direct action and video collective working in . Since the early 1990’s the group has produced audiovisual material as a tool to create a new working class subjectivity. “Through the recording and elaboration of audiovisual materials we are battling directly against the imagery of fascism. The camera is a tool, another arm, like a stick, Molotov, miguelito or covering or faces (Grupo Alavío). As a video collective we become available to the demands of organizations in struggle and often times our videos take on a life of their own. Many times the factory occupied by workers, the changing room of transport workers organizing a wildcat strike, land squat or barrio is the first place where we premiere our documentaries. Alavío uses the camera as a political organ and as a tool, which the protagonists in the films appropriate and use to organize. We use the videos as the anarchist crotos used the avío to organize and generate actions against the boss, state, macho, and church.

Making technologies and skills accessible and available to exploited people by democratizing audiovisual production and language is a priority for Grupo Alavío. For more than 15 years, Alavío has been participating in working class struggles in and supporting them with audiovisual materials.

Islam, is it how the media portrays it? Is it really all about terrorism and extremism? What do the Muslims believe? What is the Islamic concept of God? What does the Qur'an say about Jesus Christ and what do Muslims believe about Jesus Christ? Ever wondered? Well here is your chance to find out, please visit our blog--> http://thejourney2islam-team.blogspot.com/

I like the selection of images, I'm a sucker for a good picture.

I'd be really interested in an assessment of how things are going in Argentina. A few years back the left was heralding the movement there as the bestthing since sliced bread - but then went rather quiet when it receded...

I'm really happy to have found Marie. Your post was just classy.

My computer died on me last night. I willfor awhile, have to go to my local internet cafe.

Note to Sonia: The computers I have access to, have filters, to keep your site, away from the innocent.

According to Marie's blog, some remnants of the junta, are resurfacing.

interesting indeed. I am convinced any sort of workers movement must be international and the power of the internet is a great tool. Thanks for the post

1st post and already I have learned so much. Welcome Marie
Cheers
Dahlia

What is the purpose of leftist activism? Really, it makes no sense to me. I welcome an explanation.

CB: Atleast you're not asking an esoteric, abstracy question.

The purpose is to give you something to oppose, and for us a challenge.

Hi Ren. Eye.
The russian government (www.gov.ru) was doing some search on the Internet with the keyword "USA polonium". I have all the details on my blog, i will translate hopefully tonite the french article or at my earliest convenience.

A very intersting post Marie. I look forward to your next one.

Thanks to youtube.com, some interesting video clips have been posted which demonstrate the struggle of women against the religious apartheid in Iran. A just and worthy cause which never really got the support of the active feminist groups in the West. I suppose it was not anti-American enough for them to deserve any solidarity actions!

The clip below is from the early post-revolution days. Thousands of Iranian women demonstrate against the compulsory veil.Women in Iran prior to the hijacking of the revolution by Khomeini, did not have to wear veil.

Lots of interesting points in the clip. For example, the support shown by some women who themselves are observing the Islamic veil but at the same time, demand freedom of choice on what to wear by women. The solidarity shown by the nurses as the demonstrators pass a hospital. The Iranian men who supported the women and joined their demo. The young school girls, unaware of what is coming their way in the near future, and statements by Leftist intellectuals who were still under a delusion that they could achieve equal rights by taking part in an Islamic revolution which brought the fundamentalists to power.

Hi Renegade Eye. I saw your comment and stopped by to visit your blog. Greetings to another Minnesnowta blogger! I'm on the western part of the State.

Greetings! Thank you for this great post. Looking forward to read many more!

My comment is similar to jim jay's. I would be interested in hearing from Marie about the strength of lefts/TUs etc in Argentina.

Just a few years ago the movement looked reltively strong - but now? What political representation is there for lefts and what is the state and politics of the activist movements?

The US too has a history of early anti-capitalist militants riding the rails and following the harvests, mining booms,timber work,etc. Utah Phillips has made a project out of gathering their stories and songs and poetry.The video project is inspiring, we need more of just these kinds of documentarys and forums for them to be shown.Looking forward to hearing more about the struggle.