Man at the Crossroads (1934): Diego Rivera and Nelson Rockefeller 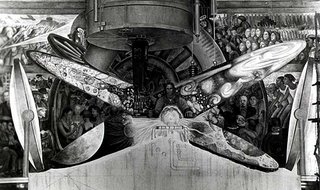 By 1930 muralist and communist Diego Rivera was achieving international recognition, for his murals, known for their passion and folkloric roots, in Mexican culture and communist principles. One of his new patrons was Abby Aldrich Rockefeller, wife of Nelson Rockefeller. She convinced her husband Nelson, to allow him to paint a mural in the newly built Rockefeller Center, in New York City.

Rivera proposed a 63 foot mural "Man at the Crossroads. It was a portrayal of a worker in a crossroad with capitalism, socialism, science and industry. In view of Diego's friendship with the Rockefeller family, they wouldn't object to Vladimir Lenin's portrait be included. The anti-capitalist theme, provoked controversy. The building managers despised the mural, and had final say about the content. The artist was paid in full and banned from the site. As a compromise Rivera proposed adding Abraham Lincoln to the mural, and keeping Lenin's picture. Despite demonstrations by Rivera's supporters, and the possibility of transferring the mural to the Museum of Modern Art. The painting was destroyed by attendants carrying axes. With Rivera paid in full, he had no say to stop the desecration.

The painting was redone at the Palace of Fine Arts in Mexico City, with a picture added of Nelson Rockefeller in a nightclub.RENEGADE EYE
Posted by Frank Partisan at 10:30 PM

Mr. Rivera really knew how to pack a lot of historical figures and symbolism into his renderings. He is one of the great masters.
Interesting piece.
You said, however, that he had "no say to stop the desecration". Desecration? You have imbued a religious connotation to this act of defilement. Apostasy to secularism?

At a Christian church in my neighborhood, they have a jazz service. Does that make jazz spiritual?

I occasionally visit the Unitarian Society for a service. The minister said art is spiritual, if it depicts reality, and doesn't glamourize it.

I found an incredible manifesto, written by Trotsky, Rivera and surrealist Andre Breton. It said the policy toward art should be anarchist. The state should not exist in arbitrating artistic matters. The document was actually against Stalinist "Proletarian art".

Roman: You caught me off guard. I hope I danced around that question satisfactorily.

Man at the Crossroads is by far one of my favourite paintings. The painting has Marx, Engels, Lenin, Trotsky, the working man, and a dethroned god. What else could a person want?

Ren said At a Christian church in my neighborhood, they have a jazz service. Does that make jazz spiritual?


Am thinking of John Coltraine...RIP

That's an amazing piece of art. I'm going to look into some of his other work.

"The form of government which is most suitable to the artist is no government at all."
---Oscar Wilde

The state should not exist in arbitrating artistic matters.

So am I reading an opposition to the National Endowment for the Arts?

Rivera never hid his political leaning. Also, he was paid, and he knew well what could and would happen.

And, Fontaine, indeed: whatever that leaning is, the state should not interfere. As it so often did.

almost forgot, and on the painting, in my opinion, I think its so "tutu"

I posted something on the picture a while ago here

And had a liberal fuckwit to stamp on for my trouble (which was good).

Have you got more details on the manifesto you stumbled on? Title? Available online etc?...I suppose I should either no it or look for it myself but why do that when I can ask ;)

Oh for the days when political art could inspire such controversy (better than a dead shark floating around in a tank of piss…or whatever.

So surely these are not four different roads to choose from. It was basically two roads – capitalism or communism.

I can always count on this blog to stimulate lots of thought.State no state, state sponsored art? desecration or defilement? Crossroads or dialectic? Love Supreme and Rockeffeller Plaza."There is no alternative" I'll be back.

I think you have quite a bit to offer to the discussions on this blog.

Fontaine: Fine art can't exist without an outside money source of some kind. I think you were alluding to the Hillary vs Rudy thing, during the New York senatorial race. Neither candidate was at the show.

beetroot: There is more choices than two. I learned a new word last night, transitional economy.

Redwine: A glass of red wine, before a museum visit.

Poetryman: I don't know how one human being, can put out so much creatively.

I just had an 8th grade English 'Shirley Jackson' flashback...How could they destroy that?!

nice blog you have here :)

I recommend two films, 'Frida' and 'Cradle Will Rock', where that abominable destruction is well dramatized...

I was just about to recomend cradle will rock.

I cry every time I watch it.

Here is another one for beatroot, participatory economy. If you cruise on over to ZNet it is well explained, Michael Albert and Robin Hahnel have written an interesting book on the system.

LOL. Not just any dance but the Lambada. Good comeback.

Oh I've heard about this. I saw a movie a while ago about him. Didn't he also host Trotsky during his exile?

hi……………………
You are a Great while writing in the blogs it is awesome I liked it too much good and informative thanks for the sharing.