The Guggenheim Abu Dhabi: No Nudes 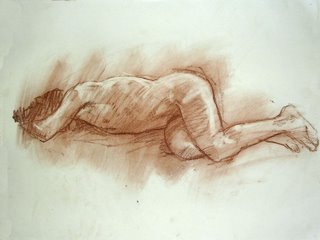 See: No Nudes. I reprinted this article from an ABC Arts and Entertainment blog. It shows Guggenheim, engaged in self censorship, not to offend Islamists.


Frank Gehry has been asked to design the world's largest Guggenheim (Photo: Reuters)

For those of us whose favourite holidays combine shopping and a bit of culture, there's another destination jostling for your leisure dollars: the United Arab Emirates.

Dubai is well known for indulging consumerist desires, but now the Guggenheim Foundation's announced it intends to build its largest art museum on Saadiyat Island (which apparently means island of happiness) in the capital, Abu Dhabi.

The Guggenheim Abu Dhabi, or GAD as it's known to its mates, will be designed by US architect Frank Gehry, who also drew up plans for the foundation's Bilbao museum (and is the subject of a Sydney Pollack doco).

But the latest addition could present a headache for curators - how to balance artistic expression and Islamic cultural sensitivities. Guggenheim Foundation director Thomas Krens says Muslim traditions will be respected:

Our objective is not to be confrontational, but to be engaged in a cultural exchange. There are things that we don't do in New York because we feel that it is not appropriate to do them in this city.

But a Guggenheim source has gone further, saying there will be no nudes or works with a religious theme. Krens says the touchy topic hasn't yet been discussed.

An art museum with no nudity? I won't be booking my ticket just yet.

See: No Nudes.
Posted by Frank Partisan at 6:47 PM

No Piss Christ exhibit in the middle of Arabia? I'm SHOCKED!

I am sure this museum built on the island of happiness will be built through the labor (exploitation) of thousands of workers from india, pakistan and bangladesh. It would be fitting to call it a museum of modern day slave labor.

I really don’t think we can pin prudery just on Muslims. Everyone has their own version of what is OK to look at.

There has been all sorts of self-censorship by museum curators all over the world. Several pieces of art have been taken down, or simply not put up, in Poland over the years.

And look at London’s galleries. Everything in the Tate Modern is designed around being ‘assessable’ ‘relevant’, ‘inclusive’. If it can’t be dumbed down it doesn’t get in the gallery.

Shakespeare is off many reading lists in British schools because, as former English teacher turned novelist Nick Hornby, says: the language is ‘just too difficult’.

So what is deemed fit to see and read changes from culture to culture. And western post-modern trendiness is as guilty of that as Dubai.

The idea of building a museum is great. It will contribute to cultural exchange. Nudity is just one part of art. Several places in West as well as most places elsewhere, gay things are dis-respected. So muslims not liking nudity is fine I suppose. It is thier choice. Personally though I wouldn't put any bar on any particular type of art.

Some Muslims, maybe even most, would be offended by the representation of any human,or any living thing, clothed or otherwise. This is not a good place to put an art museum, or any other kind of museum for that matter. Most great art is probably going to be offensive, or at least a little distasteful, to someone, somewhere.

Well, it is their right, of course, to control content, as their religious beliefs dictate, and my right not to fly over there and attend.
We also censor over here, just in more subtle ways.

I disagree with the culturally relativist argument of "well, it's their choice".

I'm sure there's tonnes of people there who want to see art but who aren't constrained by Islamic cultural sensibilities.

Anyone who doesn't want to see art representing people and the human condition (and indeed art criticising the régime) would be misguided to go to an art gallery at all. They should give in, not creative expression itself!

Great post. As an art lover of all types and manifestations I can think about the topic for days on end,... yet the hunger to write about it eludes me...

I have a good friend who lives in Dubai, one of the United Arab Emerites of which Abu Dhabi is a part. She can't see the title photo on my blog because I linked it from Flickr, which is banned in the UAE. It is a photo of a riverbank. Ugh.

David broder: I disagree with the culturally relativist argument of "well, it's their choice".

Me too! Art should be put in galleries based on merit as a piece of art, not on any other criteria.

Unfortunatly that is a very old fashioned view these days. And not just in Muslim countries. In fact, art for art sake has gone out the window. Now art has to have a 'social purpose' to get in a gallery....puke!

Education über alles. Statues should dress up, nudity is immoral and outrageous. If we let our children and adults watch nekkid pics, who knows what happens next... I completely agree! When the same intelligent creatures who ban nudity will stop buying 12 yo Bulgarian girls for backdoor job (called rape methinks), I might consider religious sensibilities.

Abu Dhabi is not the place that comes to mind when considering art museums. London, Paris and New York
maybe, but definitely not Abu Dhabi.
If their goal is to attract visitors from all over the world, censorship of any kind is counter productive. What choice do they have, though. If there is even one nude or religiously themed rendering, they risk being "blown up" by local religious fundamentalists. I would not want the job of curator in that place. I wonder if Botticelli's Birth of Venus would still convey the same message if a burka was added to grace her visage?

Problem is it is nudity to them and art to us... The body is a work of art...what are they going to do, kick us out of our tubs?

Guggenheim has been called the McDonalds of the art world.

Cultures grow just like teen-agers. Where once the U.S. was a teen-ager: idealistic, looking for fun, not taking itself too seriously, it is now a furrowed-brow young adult worried about car payments and whether or not someone else is going to beat them to that promotion. By that token, don't assume we are all artistically liberal. I believe somewhere in Alabama (and in Ashcroft's Justice Department), they covered up nude art. Art is a reflection of both a moment AND a culture. Most of us have embraced nudity in our art; they haven't. I'm not outraged nor particularly moved to assert that they are culturally backwards. They're not; they're simply where they need to be for this moment. I would be a lot more concerned about how they treat their citizens than whether David is wearing a pair of trousers.

The sad thing, beatroot and others, is that all art has a social purpose, all art is significant to the continuing humanity. Unfortunately some label it all as offensive and some label only some of it as offensive, and then there are those, like myself, that think art is not something we can label or choose to ignore, yet we can easily destroy its gift.

i beleive that some of these comments reflect a lot of stereotypes and cross cultural misunderstandings that many of us fall victim to. i think its ineteresting that terrorism and religious fanaticism immidiately comes up when discussing an art museum - ! - people in the middle east are in fact people too and just becuase you didn't know about their history, culture, and art movements doesn't mean they don't exist.
despite cultural differences, the middle east is a place like any other. there are hundreds of middle eastern contemporary artists ( in the middle east and living in the west) who will now have the oppurtunity and another venue for displaying their art. not to mention middle eastern art lovers, art patrons, young artists and children, and the general public who simply want to go to a museum on a saturday afternoon. . . .