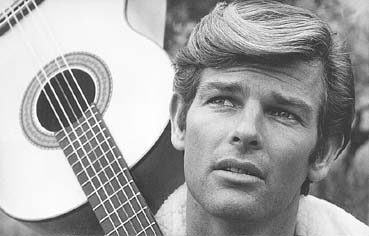 Dean Reed was born in America, but spent most of his life in East Germany. He was an actor, singer, and songwriter, who rocked East Europe during the days of the Soviet Union.

He was born in Denver, and moved to California as a young man signing with Capitol Records. He was groomed to be a teen idol. He appeared on television on the show Bachelor Father in 1958. His music was modestly successful.

He recorded a song called "Our Summer Romance," while on a tour of South America. That song soared up in South America. There he would become more well known than Elvis. He settled in Argentina.

In Argentina he became involved leftist politics. He opposed nuclear weapons, and performed free shows in barrios, and prisons. He was deported in 1966.

He performed in movies in Rome, and often toured East Europe, acting, directing and writing movies. He settled in East Germany.

Reed supported the politics of his new country. He never joined the ruling party, or proclaimed himself socialist. On the TV show "60 Minutes," he declared support for the Berlin Wall, and the Soviet incursion into Afghanistan. He received hate mail, and shocked family and friends.

He never renounced his US citizenship. He payed taxes to the US government.

In 1986 he was found dead in East Germany. His friend in Germany say suicide, his family says murder.

Tom Hanks is making a movie about his life called "Comrade Rockstar."

I was introduced to him when he was visiting in Minnesota, to support an antiwar group in the Vietnam period.

There might be more insight on Dean Reed from Redwine and the beatroot.
See: Wikipedia/Dean Reed.
RENEGADE EYE
Posted by Frank Partisan at 10:17 PM

What a fine tribute to an obviously wonderful human being. Thanks Renegade....
and Happy May Day!

Never heard of him, Ren. But good post. Poking around a bit I see that Tom Hanks is working on a movie about him.

Hollywood's finest seem to be lining up to show their liberal credentials (a la G Clooney).

Now I am off to try and find what the bloke sounded like.

he declared support for the Berlin Wall, and... he never renounced his US citizenship

How convenient! This way he didn't risk being shot in the back while trying to cross the wall...

Are you sure his death was a suicide? Declaring support for the wall wasn't exactly a popular position in East Germany.

Anyway, he wasn't the only person fleeing "oppressive" West for the Communist paradise... But unlike the refugees going in the "right" direction, those confused souls quickly realized their monumental mistake and only their egos prevented them from admitting it... Some still don't, living on meager pensions in Siberian wasteland and proudly refusing any help...

He made a choice and lived his life as he saw fit. It is nice to read about such people. He looks great too!

When Reed was in Minnesota, he supported a pacifist/syndicalist group called "The Honeywell Project." It opposed Honeywell making cluster bombs.

I wouldn't be surprised if his actual politics was pacifist.

I'm such a nerd I actually have heard of this guy.

Surpisingly I have actually heard of him and know someone who more than likely will have the odd vinyl album of Comrade Rockstar's to boot. Interesting to read about the forthcoming film.

I would have been a Communist (hardliner, khe) in the 20's or 30's. I would be in latin-America or India or Pakistan (the list is open).

As for his pacifism: supporting the Berlin Wall and the invasion of Afghanistan, that is a pacifist hobby indeed. Let alone that Western citizens had a very different status in the socialist countries. Did he apply for citizenship? I can respect his views, up to the point he moves to Germany. (One of them).

I'm glad there was someone who could love Honecker, really. Honecker must have been very lonely without him. One kissed him (see beatroot's post), one loved him.

I don't believe in the "suicide par" version. But paranoia was in full swing in the 80's.

Waiting for the rest to move to Cuba, North Korea and Saudi Arabia.
Somehow they don't, who knows why.

Nothing insightful, sorry: a bit down with fever, and somehow I can't praise someone who preferred to keep his eyes closed to the extent he did. But when I think that Ceausescu was a great favorite with Nixon and the Queen of England....

Wow, never heard of him before..interesting!

I vote murder. Just an instinct.

I think the decent thing to do would be to acknowledge that you took this post from Wikipedia. V. interesting nonetheless.

I was busted. I was too lazy to credit it.

I wrote a book about the guy which came out in late 2004 in Germany. It's called "The red Elvis" and a documentary with the same title will follow in early 2007. People like Armin Mueller Stahl, Isabelle Allende or Egon Krenz have been interviewed for this one and the movie will totally rock. We have such phantastic footage! Dean Reed and Arafat dancing with machine guns over their heads and stuff like that.

Here is an English Info!

You can contact me through my weblog or MySpace

It was suicide, believe me!