The New Face of Racist Terror. 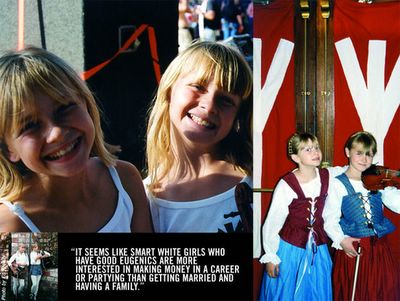 NOT THE OLSEN TWINS!

The picture above is not Mary Kate and Ashley Olsen at thirteen years old. The picture is of Lynx and Lamb Gaede. They're sweet. They're pretty. They're multitalented instrumentalists and singers. They are collectively known as Prussian Blue.

They are the daughters of Bakersfield CA activist and writer for National Vanguard April Gaede. She is also their manager, and home school teacher. They sing songs of white supremacy and pride.

When the girls were asked, what they believe is the number one problem facing the white race, and if they have songs to address it? They replied; "Not having enough white babies born to replace ourselves and generally not having good-quality white people being born. It seems like smart white girls who have good eugenics are more interested in making money in a career or partying than getting married and having a family. And yes, we are working on some new songs about this issue".

In times of turmoil, as now, with high unemployment, jobs outsourced, and war; maggots like this family show their face. Defeat them with mass antiracist action. Send them underground.

This is legal child abuse, teaching hate and ignorance, in the isolation of home schooling.

10/25/05 ADDENDUM.
My writing incorrectly implied a single parent situation. I only mentioned the mother, because she is more prominent in the white supremacist movement.

I take back child abuse talk. Its not child abuse, just parenting I have disagreements with. I don't have the answer.
Posted by Frank Partisan at 7:18 PM

Fascinating post. I fully expect they (more accurately, their mother) will tag themselves as "religious" believers and find some well-worn passage of the bible to quote ad nauseum. It's interesting, though, that their message has an anti-feminist tone, since reading between the lines indicates a single mother. Staying home and having babies won't play well on the women's rights frontier. The ways that people find to subjugate themselves are endless.

But they're soooo cute. And, really, they sound scarcely different from a lot of hip-hoppers and "civil rights" activists. Just let me switch the words, and tell me what you think:

"Not having enough black babies born to replace ourselves and generally not having good-quality black people being born. It seems like smart black girls who have good eugenics are more interested in making money in a career or partying than getting married and having a family. And yes, we are working on some new songs about this issue".

Farrakhan? Sharpton? One couldn't be blamed for thinking so. I wonder when the national media will seek them out for they're opinions on a myriad of issues for which they're totally unqualified to comment.

Geeezz. I am still amazed by the staggering and lingering racism in this country. Perhaps I shouldn't be in school right now, but at home getting pregnant right?
Good post!

It seems like smart white girls who have ... are more interested in making money in a career or partying than getting married and having a family

Do they not have a point (ignoring the eugenics BS) ?