Get Off My Lawn 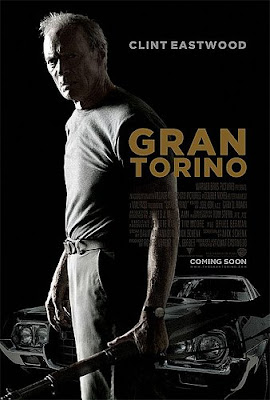 I was planning quick reviews of several movies that I recently have seen. I think Clint Eastwood and Gran Torino, are a subject to themselves, interesting enough to not gloss over.

Torino is like combinding Archie Bunker, Dirty Harry and Crash together. Eastwood is a Michigan based, retired auto worker Walter Kowalski. His wife the source of stability and love in his life died. The movie opens at her funeral. We're introduced to a young preacher, who was close spiritually to Kowalski's wife. In addition we meet his ungrateful family, who are thinking about what belongings of the deceased they will acquire. Walter is not Mr. Personality. Every person he comes across, he has a racist or humiliating slur for them.

His neighbors are a big Hmong family. We are reminded throughout the film about Kowalski killing "gooks" in Korea. He sits on the porch, giving evil stares to his neighbors.

When Hmong gangbangers rough up the family members, he gets into Dirty Harry mode, goes into his house, and brings out a rifle, and says, "Get off my lawn." The heels flee. The Hmong family show gratitude by bringing gifts to his steps. He refuses at first, and claims he was only protecting his lawn. He eventually breaks down and gains interest in the family, which contrasts to his own. Kowalski becomes like a father figure to their two well behaved teens.

All of the Hmong (Kowalski called Hamong in the movie) actors, were found in open casting. Eastwood's acting was so strong, that it covered up for the rest of the cast.

Minneapolis has a large Hmong community that is not happy with this flick. I don't believe the purpose of the movie was to show Hmong culture documentary style. It could serve as an introduction to Hmong culture for the heartland.

Walter Kowalski is the real name of famous wrestler Killer Kowalski, who also was at one time a real life Detroit auto worker.

This movie is everything you like about Clint Eastwood.

bad news to the Zionists,
back to blogging :P

The Wrestler is an excellent movie.

Sonia: Torino wasn't released yet. How could you have seen it?

Larry G: Killer Kowalski recently died. He got married for the first time at 79 yrs old.

I was in Mexico. You can buy every unreleased Hollywood movie there for $3...

I look forward to seeing it. He's starred in and/or directed some excellent ilms

some excellent films too!

Jams: This movie is not "Schindlers List," but is a good time. It's Eastwood's final role in front of the camera. The last hurrah of Dirty Harry.

ren - sequel to GET OFF MY LAWN! may be found here.

Walter Kowalski is the real name of famous wrestler Killer Kowalski, who also was at one time a real life Detroit auto worke

He was a big name here in Boston for his wrestling school. He did a lot to turn it into wide scale entertainment.

I met him a few times. A very polite soft-spoken guy.

I remember it well when one of the guys threw a coke at him when he was trying to put the claw hold on Frank Scarpa down at the old Malden armory. Simpler times.

Didn't know he worked on the line.

Now if Clint had taken the character's name to remember "Killer", that would have been pretty cool.

i too saw it. i loved it with a passion. i was a little unsure for the first 1/2 hour or so. i thought it was just typical dirty harry. no, he surprised me and went way beyond.

sure clint can be dirty harry but always remember, this is the man that ALSO gave us (directed) bird

Ducky: I also met Killer Kowalski. He was a fascinating guy. A strict vegetarian all of his life. That was used in Minneapolis to get him heel heat.

He got the name Killer, because Yukon Eric lost his ear in a match against him. The story is thet Yukon's ear was so brittle and cauliflower, it would have fallen off by itself. Kowalski visited him in the hospital. A newpaper reporter overheard him laughing. That was how he became Killer.

A Rose Is A Rose: I liked "Dirty Harry." When it was new, I was on a revenge movie kick after "Deathwish." Torino was really fun.

I have just got a copy of this, thanks for the review.