I will be having an open thread during the important elections this month in Pakistan. 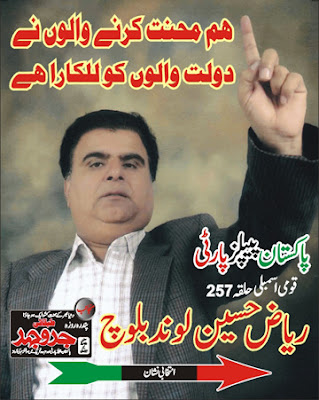 The election campaign in Karachi has gained momentum once again after the assassination of Benazir Bhutto. Karachi is the main industrial city of Pakistan with a huge proletariat. Workers from all kinds of ethnic backgrounds have migrated to the city over a period of decades. In order to break the unity of workers along ethnic and national lines, state sponsored organisations are also working in full swing.

The 18th February elections are an opportunity for the masses to express their anger and wrath against the ruling classes. Their deteriorating standard of living and miserable living conditions have once again pushed them towards the Pakistan People's Party, which they see as the party that was formed out of the 1968 revolutionary mass movement. The People's Party, in spite of what its leadership has done at different times in its history, is considered as a party of the masses and the workers. Because of this it has always been seen as a thorn in the side of the ruling classes.

The new tide of the masses towards the PPP, especially after the assassination of Benazir, has once again disturbed the agenda of the capitalists and landlords. In Karachi the state sponsored reactionary MQM has used terrorist and fascist methods to divide the working class and harass and besiege them. Their method has always been to try to keep the masses away from the political process and confine them within their homes and workplace.


However, now the people are fed up with these fascist methods and refuse to be kept as hostage in their own homes. The PPP is tipped to win the elections with big margins and this is giving sleepless nights to these fascist elements. In an attempt to stop this rising tide of the masses around the PPP they are employing new and modern tactics of rigging the elections.

In the past they killed many of their opposing candidates and their supporters. This time they have the added advantage that the Sindh regional government and city administration of Karachi are in their full control. All the law enforcement agencies are under their control and they have also a tamed judiciary which is working according to their whims.

Hundreds of PPP activists have already been booked under false charges of terrorist activities and are being held in jail. Their families along with the candidates are harassed by the Anti-terrorism court despite campaigning for the elections. This is only one of several methods employed to disturb the campaign of the PPP.

A big plan has been prepared for Election Day on 18th February 2008. Special arrangements are being set up for NA-257 Karachi. This was once considered a safe MQM seat. However, after a revolutionary Marxist campaign led by comrade Riaz Hussain Lund Baloch in this area, these fascist elements now fear defeat.

Special instructions have been issued by the governor of Sindh and by the city administrator to use all methods to stop the Marxists from winning this seat. In the past elections MQM always won by harassing and terrorizing their opponents. In NA-257, which constitutes part of Malir District and East District, people still remember the past elections with fear and terror.

In 2004 Abdullah Murad Baloch, who was a member of the Sindh Assembly for this area was assassinated. After his assassination by-elections were held in his seat and the MQM candidate won by blatant rigging.

That by-election was a tale of fascist activity at its peak. Big numbers of armed MQM thugs entered the polling stations at a specific time on Election Day and opened fire inside the station. The polling agents of the PPP were taken hostage and locked up in toilets and other rooms. Then these hoodlums seized the official stamps and started stamping the ballot papers unhindered.

The police and paramilitary forces were mere spectators while this rigging was going on. Armed men of the MQM also stood between the polling staff and the ballot box and when someone entered to stamp the ballot paper they snatched it and asked the person to go home saying that they would stamp it themselves.

This time as the local government is under their control, they have printed additional ballot papers for NA-257 to give them to their activists. This time ballot boxes could also be replaced inside the police vans as they are transported away after the balloting on Election Day.

If one looks at the election results of the by-elections in 2004 one would be surprised to see that MQM candidate got 100 percent of the votes in some specific polling stations which would be unique in the world. This clearly indicates that those elections were rigged.

The revolutionary campaign of the Marxists in NA-257 has mobilized the masses and they are now preparing to come out in big numbers on Election Day as their real guarantee of security.

The MQM is also pressurizing the Electoral Commission and Returning Officer who will announce the result. It is also possible that despite getting a majority of votes on Election Day, the PPP candidate could lose his seat. These reactionaries can force the Electoral Commission to announce the result in their favour. The only legal method to challenge this is through the courts where the appeals of 2002 elections are still pending!

All this fear, terror and oppression are unable to weaken the revolutionary commitment of the masses that are now treading the path of revolutionary politics. This time they have vowed to take revenge for all the tears and bloodshed. The stakes are high and the goal is socialism.RENEGADE EYE
Posted by Frank Partisan at 11:59 AM

This was once considered a safe MQM seat. However, after a revolutionary Marxist campaign led by comrade Riaz Hussain Lund Baloch in this area, these fascist elements now fear defeat.

Interesting. The same people who used to vote for fascists, now want to vote for Marxists...

In reverse, it strangely resembles the 1933 election in Germany, where the safest Communist districts voted overwhelmingly for Hitler...

"Interesting. The same people who used to vote for fascists, now want to vote for Marxists..."

Once Zizek summed up fascism as "capitalism and organic unity at the same time"... we could add that, capitalism without contradiction between labour and capital. As Hitler said: "Now we have found a new economic system, a system which is this: Capital is the power of labor and the coverage of money lies in our production."

Poeople smothered with capitalist decomposition seeking a way for resolution here and there.

"In reverse, it strangely resembles the 1933 election in Germany, where the safest Communist districts voted overwhelmingly for Hitler..."

it is not sound to conclude that communists voted for Hitler.

The German KPD at that period, was heavy into what is called "Third Period Stalinism," They ran their own candidates against Hitler until they were banned.

The Trotskyist candidates, will most likely win most of their races. They are even running on the Afghan border, as an alternative to the US and Taliban. The group is involved in every school, trade union, region, big city etc.

Contrary to Scotland Yard. Benadir was hit by a sniper. This bumped her head business, is to steal her martyrdom.

It seems counter-productive to talk of Pakistani society as democratic in any meaningful sense.It is more dysfunctional, in it's own way, than Russia or the US.A farce is a farce is a farce, despite a few defiant judges and lawyers.

the issue with the election results in Germany 1932/33 is far more complicated, e.g. in the 2nd election in 1932, the Nazis most likely lost also many votes to the right-wing conservative DNVP, there were also voters floating between SPD & KPD, etc. ... the main sources of voters for the Nazis were former voters of liberal, conservative and peasant parties and young people/non-political people who hadn't voted before, the two workers parties SPD & KPD and also the two catholic parties Zentrum & BVP remained relatively stable, the NSDAP wasn't able before they came to power to made any further impact into the core voters layers of both the worker's movement and the catholic milieu ... after 1933, this changed ... for all the election results, see http://gonschior.de/weimar/Deutschland/Uebersicht_RTW.html

Interesting post, Renegade. Though I think it's best we agree to disagree about the character of the PPP, nevertheless I wish your comrades who are standing the best of luck.

Re: the March 1933 elections in Germany, these cannot be considered normal elections, even by Weimar's standards. By this time Hitler and been levered into power and he was using state power to harrass his opponents at every available opportunity.

Entdinglichung: Thank you for visiting.

Phil: Your group's abstention from being involved with the PPP, has made them invisible there. You are correct about the PPP, still people believe in it, based on Benazir's father's socialist program.