Kenya: What Is To Be Done?

Journalist David Osler at his blog Dave's Part, presented a post that I think can be a good basis for a discussion about Kenya's latest events. According to Marxist Alan Woods,"Just look at Kenya - it was supposed to be a success story, carried out market reforms, privatisations, etc., it was considered a shining example of democracy. Now we see the opposite: barbarism, elements of social disintegration - as a result of all of that. It is easy to play up the elements of barbarism - we can see them even in advanced countries of Europe: crime, drugs, murder, collapse of morale in society. How can we expect anything else of a system in decline? As Lenin said: capitalism is horror without end. 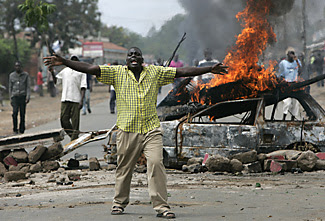 Obviously, the answer to that question depends entirely on how one assesses the situation. Jendayi Frazer - US assistant secretary of state for African affairs – yesterday described what is going on as ‘clearly ethnic cleansing’, but was careful to add that she ‘does not consider it genocide’.

That evaluation seems to me – sitting here in London, with no special knowledge of the country beyond a visit on journalistic assignment a few years back - essentially incontestable.

Although there is a worrying tribal dimension to the killings, the scale of brutality does not seem commensurate with the portentous designation ‘genocide’, in the generally accepted sense of the word. This isn’t a re-run of the killing fields, at least not as things stand.

But saying that leaves open the issue of exactly where the threshold should be placed. Would 10,000 murders suffice? If not, 100,000? More still? Can we work on the basis of some hitherto unspecified percentage of a given ethnic group? Does 50% plus one count as genocide, but not 50% minus one?

It is impossible to answer that question, although one is reminded of Supreme Court Justice Potter Stewart’s famous definition of hard-core pornography: 'I know it when I see it.’

Naturally, Ms Fraser chose her words extremely carefully; after all, 2008 marks the 60th anniversary of the United Nations Convention on the Prevention and Punishment of the Crime of Genocide, which theoretically imposes on the UN an obligation to prevent genocide. I say theoretically, because in six decades, it is arguable that the UN has not acted to stop a single instance of this most horrendous of crimes.

"It might not be fashionable and right for the armies to get involved in such a political situation. But in situations where institutions have lost control, I wouldn't mind such a solution," he said in an interview in Kigali with Reuters on the eve of an African Union summit in Addis Ababa.

That’s not an idea any democrat could find remotely desirable, of course. In any case, it is simply not a runner, as the Financial Times points out:

Kenya is one of only a handful of sub-Saharan African countries never to have experienced a military coup.

The make-up of the army reflects some of the same divisions within Kenyan society exposed by the post election crisis. Many of the ground troops are from poorer ethnic groups sympathetic to Raila Odinga, the opposition leader who believes he was robbed of election victory. More of the officer class have been appointed from Mr Kibaki's Kikuyu tribe.

Kenyans familiar with the army say senior commanders have been reluctant to allow the deployment of troops for fear they could splinter along ethnic lines.

Kagame speaks, of course, as the head of a country where long extant tribal tensions spun out of control, setting off the chain of events that led to the massacre of 800,000 people in the madness of 1994. That stands as a warning of what could yet happen in Kenya.

Yet the solutions that socialists normally advocate seem just as inoperative as his demand for the army to step in. I don’t doubt that some far left websites will issue rousing calls for the Kenyan working class to seize state power; but in a country where organised labour is as divided on tribal lines as any other institution, even such abstract propaganda is liable to be misread in tribal terms.

All the international left can do is watch matters play out, in the hope that two sets of corrupt and business-oriented bourgeois politicians defuse the brutality before a bloody endgame is reached. It is hardly an encouraging prospect. RENEGADE EYE
Posted by Frank Partisan at 12:46 AM

it has left me boggled- and confused...and sad...that everything you said is accurate,,,

Just look at Kenya - it was supposed to be a success story, carried out market reforms, privatisations, etc.

This is a good one. Nobody has ever pointed to Kenya as an exemple of "market reforms". Hong Kong, South Korea, Singapore and Dubai are shining examples of capitalist economies. Definitely not Kenya.

As Goebbels once said, "when you tell a lie, tell a big one" - that's what Alan Woods is doing. In reality, Africa (except for South Africa) is the LEAST capitalist of all continents. It's the place where the collectivist poison is the strong.

Maybe the people who have brought us the Diebold system of electronic voting, particularly in Florida and Ohio, ought to pay close attention to what is happening in Kenya re a stolen election.

On a note of less levity, it's disheartening to think of how often we've seen that photograph, posted from Somewhere in Africa. All my life, I think.

This is partly caused by tribal rivalries, but even more so, one may think, because of the enormous bribes and so on paid out by Euro companies to take control of Kenya's potable water, bottle it and sell in Europe and the U.S., from those big Agri bizs for cut flowers and so on, all of which are shipped out of the country to Europe and the U.S. markets, by other big bribes paid by the Chinese and Indian corps, to control other natual resources -- all these resources control and exploited by and for others who aren't not just Kenyan, but not even African, while squeezing all the tribal lands into smaller and smaller spaces. What had been communal is now privatized, and privatized for the multinational corporations' profits, not for Kenyans and Africans.

It's the place where the collectivist poison is the strong
Dostoievsky wrote "It is not by confining one's neighbor that one is convinced of one's own sanity."; and you should not jump to conclusion because it does not work like that. Collectivism is not the effect that people are against the capital, and there are different approaches with Hobbes, Lock and Rousseau. I've never been able to solve the problem anyway, I'm still looking at engineering the perfect society.

Ren. Eye read on my blog the essay on "capitalism and schizophrenia".

Sonia: You switched the words from neoliberal model to market reforms.

The world powers talk to both of Kenya's leaders equally. They have no differences in political policy. All the world cares about is stability.

A bourgeoise democratic solution to stop short term violence, would be to have a recount.

I think that Kenya proves that democracy (by itself) does not work, because all it takes is one malcontented Leftist asshole to throw a turd into the punch bowl and spoil society for everyone.

Even Plato wasn't stupid enough to build a Republic without taking out an insurance policy. Long live the nocturnal council!

It always seems like they are waiting until Terry George or someone makes a movie about it before it is officially "Genocide."

Kenya did not seem the kind of place where anything remotely akin to this could happen. I say this as someone who's been there before, and who encountered, in the main, very mild-mannered people. I was horrified by the turn of events therefore, and can barely pluck up the courage to look at the increasingly portentous news reports. It's getting harder and harder to sanitise the blood from these newsflashes. On the one hand, you don't want to see the blood; on the other, you dare not allow yourself to be deluded as to the extent of the atrocities, so you want to see for yourself, just how bad it is.
When Kibaki was hurriedly sworn in before the vote results had actually been announced, I could only shake my head. I despaired, looking at the man. He is past his best; he has nothing left to offer anyone; let alone a country; he is saddled with an embarrassment of a wife who slaps officials all over the place. Yet he wants to hold on to power. This is the tragedy of my Africa; leaders that just won’t go.
This is not democracy. This is what the late Fela Anikulapo-Kuti called: Democrazy.
But what is happening in Kenya now is beyond anything connected to a disputed election. It’s no longer about a recount, but the counting of the piling bodies. Hard to make sense of it, but what is clear is that these are old grievances, old rivalries, breaking out like phantoms from hell. A flawed election has merely given vent to it.
I saw a news bulletin the other day where a young man whose panga was caked in what he called the “pure blood” of many people, boasted about killing a former classmate of his. You wonder: what makes someone who never killed before suddenly become a butcher of men, women and children? What madness? I don’t know. But it seems to me that there is a madness lurking under the civilised veneer of every society. Given the right – or shall we say wrong – circumstances, it will come to the fore. And when it does, Lord knows what is to be done.
A fellow writer pointed out to me today how Kenyans who are not even on the ground back home, who are in the Diaspora – are tearing one another apart in the blogosphere with the mote hateful language imaginable. I went to some of these sites to read some of the comments for myself. Frightening. Something has been unleashed, which will be difficult to curtail even after the bloodbath is over. Long live Kenya.

It is hard to believe Molara (Wordsbody) doesn't often write about politics. When she does, it's always worth the wait.

The election has become an afterthought.

All those countries rejected market fundamentalist doctrine and used their government to grow industry. Africa, much like South America, has been dominated by the IMF and world bank.

Alan Woods On The Barberic Consequances of Capitalism in Kenya.

What you and Woods call "capitalism", I call "socialism".

Thriving pseudo democracies are a boon for the US. When they collapse corporations jump in to save the day (read make astronomical profit of misery).

Call it whatever "ism" you please, it is most evil...

Kenya, yet another troubled country. The problems seem to multiply rather than decrease. Where will it all end?

No, that is a utopia that doesn't exist. Singapore is a tiny city-state (that is full of investment from LARGE foreign companies, not a bunch of small business owners), how do you propose to do that in large countries when there are multi-national corporations that have more money to throw around than many countries do? It certainly isn't in the companies interest to dissolve their power.

"Africa (except for South Africa) is the LEAST capitalist of all continents."

Is this a joke? I've never seen a better example of pure laissez-faire capitalism than the African marketplace.

The marketplace which is the lifeblood for I dare say the majority of Africans (either as sellers in the market or providers of food for the market).

And many multinationals that invest in African countries aren't burdened by those evil labor and environmental regulations.

I suppose anyone can win an argument if they pervert the definition of key words.