SEVEN WOMEN AT RISK FOR STONING 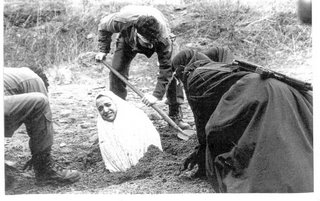 Seven women are at risk of imminent execution by stoning in Iran. Sign the petition against it by clicking here

This outrage has to be stopped now!

I will never understand these barbaric traditions and the transgressions for which they are meted out. Sorrow cannot explain my feelings about this. I do not know how we impact change in these rules when it is deeply embedded in the culture and the religion.

Ah yes, Islam, the religion of peace. Ahmadenijad and the Ayatollahs - sounds like a 60's musical act - only mean well for the rest of the world with their peaceful nuclear program too.

Peace to all and good will towards men (and women)!

I don't think a petition will be enough for these barbarians...

Jesus, Henry. Why to bother at all. In SUCH cases it does matter. There is a beautiful video online, on stoning. Available on several feminist and leftist sites. I won't post the link, it is not difficult to find it, watch it. Then think a bit.

You're quite right to oppose this and I've signed the petition. Of course our governments are responsible for far more indiscriminate killing of "innocent" and "guilty" alike and we should not allow other people's barbaric traditions to let us forget we have quite a few of our own.

I am saddened that these woman are treated this way.

Your second commenter, Unsane, had used this image to bash males unfairly with her idiotic short curt 3 word replies, not doubt to drive people seeking controversy, to her pathetic site that currently receives 7 hits a day.

Jennifer Cascadia is as ignorant as the people responsible for these stonings.

God have Mercy on them both.

Franco: The football player? I'm sure you are reading things into Unsane's post. She simply does not write in riddles. If she meant what you say, she'd of said it. I've read her blog, for quite awhile.

I have to admit, I really don't know how much petitions work. My experience has been to collect celebrity names for an add etc. Amnesty International seems to believe in it.

Oops I meant ad not add.

jim jay: We don't really need a disclaimer, that we oppose all religious persecution, all the time. I think we can take for granted.

I think a little man-bashing is perfectly in order.We can't ignore the patriarchal, mysoginist undercurrent that runs through most barbaric religious practices.And warfare. And capitalist exploitation. Its a major theme of modern civilization.It will be up to moderate Muslims to reform their wacky religion and moderate Christians to do the same.

Oh yes, I see my "troll" has found its way to this site. Please don't feed the troll.

truly sickening. i signed and wish i could do more.

I signed it, but that was probably more to make me feel useful than any help to the women. It's barbaric. It's about a lack of development.

This isnt a male/female issue. Its a human rights issue. Its human beings being slaughtered in the most ruthless of manners. Here is a list of men about to be executed:

For what little good it will do in reforming patriarchal societies, I signed it.

The problem isn't so much the religion (all religion is inherently anti-authoritarian and peace loving in nature, including Islam) but the hypocrites that force their misinterpretations on their unsuspecting and usually ignorant followers.

We must do what is right.

2. Sign the call for the impeachment of GW Bush and Dick Cheney and Rice and Rummy and the rest of the brutal gang. they've killed more with lies and bombs than any certain thugs of Iran can fond stones to throw.

5. March in the goddamned streets!

Theu US need lead by example. Bush put out a call against torture and stoning and it means diddly squat!

"I have to admit, I really don't know how much petitions work." Sometimes they do. I think it saved Amina Laval from stoning for example. One should be careful though, and go to the original AI etc sites, and sign there: otherwise it can lead to the opposite, and considered spamming.

I'm so glad we separated the State from the Church (France, US).