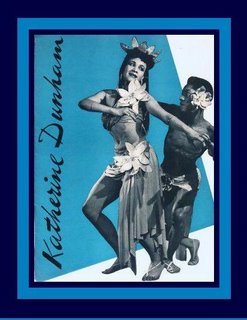 She received her B.A. from the University of Chicago in 1936, in social anrhropology. Awarded a Rosenwald Travel Fellowship in 1936 for her combined expertise in dance and anthropology, she departed after graduation for the West Indies (Jamaica, Trinidad, Cuba, Haiti, Martinique) to do field research in anthropology and dance. Combining her two interests, she linked the function and form of Caribbean dance and ritual to their African progenitors. While a student at the University of Chicago, she persued her interest in dance, she had since her teen years.

The West Indies experience changed her life forever. She lived half time in Haiti, studying dance and anthropology. She was a princess in the Vodoun religion. She lectured widely, and wrote three books about her experience, DANCES OF HAITI (her master's thesis, published in 1947), and ISLAND POSSESSED (1969), underscoring how African religions and rituals adapted to the New World.

Her contribution to dance, is what is called "Katherine Dunham Technique," was the introduction to the dance world, the addition to modern dance the African and Caribbean styles. Her students included Marlon Brando, James Dean, and Eartha Kitt.

The Dunham experience was traditional folkloric movement, combined with Hollywood dazzle. When you see a movie from the late 1940s to the 1950s, with scenes of the natives dancing in a ritual, think Dunham.

The Katherine Dunham Dance Company toured the world from the 1940s to the 1960s.

As an activist she participated in a fast of 47 days, to protest US treatment of Haitian refugees. She also refused to perform in front of segregated audiences. She taught dance in East St Louis, to divert kids from gang activities.

During the 1980s, Dunham received numerous awards acknowledging her contributions. These include the Albert Schweitzer Music Award for a life devoted to performing arts and service to humanity (1979); a Kennedy Center Honor's Award (1983); the Samuel H. Scripps American Dance Festival Award (1987); induction into the Hall of Fame of the National Museum of Dance in Saratoga Springs, N.Y. (1987). That same year Dunham directed the reconstruction of several of her works by the Alvin Ailey American Dance Theater and "The Magic of Katherine Dunham" opened Ailey's 1987-1988 season.

In her later years, she was destitute. She died in a New York City, living in a long term care center. She gave up the limelight, to help the poor in the US, and Haiti.

She was the best known, and most important pioneer, in introducing African and Caribbean influence to classical, stage and cinema dancer. It is difficult to write about her accomplishments, without writing a book. Renegade Eye
Posted by Frank Partisan at 8:28 PM

Katherine Dunham, along with Daniel Nagrin, Alvin Ailey and Talley Beatty, all working in the ’60s, moved jazz to the concert sphere with their dance companies.

It was even seen on television beginning in the ’50s with groups such as the June Taylor Dancers. In the ’80s, the MTV generation and rock/funk/hip hop music gave jazz yet another new look.

Jazz fuels this form of Art.

Jazz evolved from the categories of "Nigger music" and "race records" to the more lofty status of an American art form, as an American treasure.

It was the invention of Africans in America under the pressures and limitations of an oppressive society, but remains America's premier indigenous art form.

My late grandfather was senior clergy in the vodoon religion, and we Africans communicate with God through Music, dance, and visual arts.

Fascinating post Renegade I must find out more about her. Thanks

Leaving the limelight to help the poor. God, i can't imagine one of today's artists doing that

Further to my earlier comment, may she be in peace

Toast a glass to Katherine.

I could use a hand formulating some follow-up questions for an interview with a hard core Right-Winger that I've just posted on my blog.

Any help from fellow comrades would be appreciated.

Come on JB! You don't need help finding questions for me. You're a smart guy, what's this about?

I wanted to ensure that we had a good post-interview discussion that could generate some interesting follow-up questions. I'm not cribbing anyone's work; I would, however, appreciate feedback.

I never heard the word cribbing before. Nothing wrong with asking advice, to make a better product.

Helping the poor and less fortunate and being an activist is really cool. There are not too many people alive today who would do it. That is amazing.

"'''Helping the poor and less fortunate and being an activist is really cool."