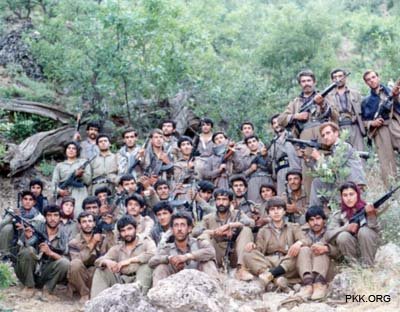 The PKK revolt centered in the Turkish city of Diyarbakir started in 1984. Since that time 37,000 people have perished in the fighting. The most recent fighting is unique, is that Turkey has received the support of neighboring countries. They plan to also negotiate with the Baghdad.

Syria and Iran also face the possibility of revolt of their Kurdish populations. They also harbor dreams of a united Kurdistan. The Kurdish population in Northern Iraq, actually have some degree of autonomy. They have been aiding the Kurdish in Turkey, financially, and by giving refuge to PKK fighters.

If Kurdistan became independant; it would carve up borders in Iran, Iraq, Syria, Turkey, and the Caucasus State. It would be greater than any of the "color revolutions" in Ukraine and Georgia. Energy agreements would have to be renegotiated. It could inspire other national groups to revolt.

Ankara has been making serious military alliances, particularly since Kurdish in Northern Iraq, negotiated an oil deal with Norway, independant of Baghdad.

Islamic units fighting against Kurdish independance, can provide a diversion from their fighting the West, Russia or Israel. Allies may convince the Kurdish, that independance is reachable.

Recently US intelligence and Turkey, have been working against the PKK in Turkey. It is geared to eliminating the PKK's influence in Northern Iraq.
RENEGADE EYE
Posted by Frank Partisan at 11:44 PM

My big sis's husband is half Turk/ half German (and he Christian). They have visited Turkey 3 times (hence my burning desire to physically see the Hagia Sophia) and they are always amazed that the Turks can be so openminded about embracing so many Western ideas and customs yet so closeminded to other ideas and customs. I think he would be appalled to know that Turkey is going this route against the Kurds. I'll be sure to pass this info to him.

The Kurds see the writing on the wall for them in Iraq. They are being vocal about what they have deemed to be "ethnic cleansing" of the Sunnis by the Shiites. They fear that once the Shiites get rid of enough Sunnis the Kurds will be next in line to be placed in the crosshairs.

Oh yeah... I re-commented on your lovely post about me and BabyGirl :)

when will there be a day in the world with no wars?

"Last February, in an interview published in a Swiss newspaper, I said that 'a million Armenians and thirty thousand Kurds had been killed in Turkey'; I went on to complain that it was taboo to discuss these matters in my country. (...)This was partly because I believed that what stained a country’s “honor” was not the discussion of the black spots in its history but the impossibility of any discussion at all. But it was also because I believed that in today’s Turkey the prohibition against discussing the Ottoman Armenians was a prohibition against freedom of expression, and that the two matters were inextricably linked. Comforted as I was by the interest in my predicament and by the generous gestures of support, there were also times when I felt uneasy about finding myself caught between my country and the rest of the world." (Orhan Pamuk)

This is, of course, one of the reasons that Turkey opposed the Iraq war and made things very difficult for the 'coalition' to start its invasion.

Turks thought, rightly, that after the baathist regime - and most of the cilvil and security service along with it - was smashed, the country would split into ethnic lines.

The US/UK have treated Iraqis as three seperate groups and they are responding in kind. Kurds have got the best deal and its the most peaceful and prosperous part of Iraq.

But when you go to Turkey - a fantastic country, that has a western west and a very Islamic east - Kurds approach you to tell you how bad the Turks are. And the Turks do have a blind spot about this issue as much else in their history.

Just like the US, UK, Poland have about theirs.

But I do not think encouraging yet another nation to emerge (Free Kurdistan etc) on ethnic lines - like in the Balkans and what is now happening in Iraq - is really helping matters. Kurds should fight for equal rights in the countries that they are in. Not another ethnic homeland, please!

WHatever happened to Ocalan? Did they exceute him?

Actually, I would argue that the turks are openminded about embracing ALL the Western ideas and customs, from secularism to ethnic cleansing.

The lesson they have learned from Europe is this: countries that ruthlessly expelled its ethnic minorities and are now homogenous (like Greece, Austria, Czech Republic, etc.) have far less problems than those countries who allowed minorities to survive (Spain and the Basques, Catholics in Northern Ireland, Muslims in former Yugoslavia, etc.).

There are no German terrorists in the Sudetenland, no angry Muslims in Epirus. Like Serbs under Milosevic, Turks are making a calculated decision: short term pain (denounciation from the international community) for long term gain (an ethnically homogenous state)... The Serbs failed because Milosevic was a moron, but the Turks are far more clever...

Kill a (blank) for your ruling class today. After all, they own the nation. But don't say that to yourself. Just believe in your nation, your tribe, your ethnicity, your religion. You are not human beings. "You're only a pawn in their game."

Have you see Renoir's La Grande Illusion? It's not the only film that points out that lower classes are in fact far more nationalistic than the elites...

Sorry to destroy YOUR illusions...

Great idea to have a group picture taken so that the Turkish secret service have a way to track them down. Not very bright those PKK rebels.

Great post...thanks for sharing...that picture is a little unsettling to me.