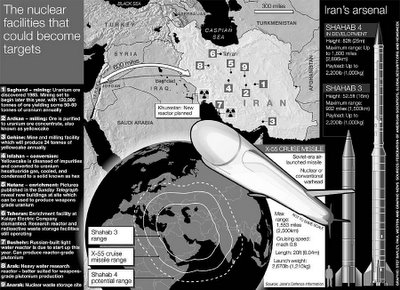 Strategists at the Pentagon, are planning bombings of Iran's nuclear sites, followed by submarine launched missile attacks, if diplomacy fails to stop Iran gaining an atomic bomb. This was uncovered in an article in the UK Telegraph.

I think both the US and Iran are using exactly the same strategy. It was done by Richard Nixon, during negotiations during the Vietnamese war. Make your opposition believe they are dealing with one crazy SOB, who'll use any tactic. This is a strategy to get concessions.

The US doesn't have the support of the UK on this. Prime Minister Tony Blair believes it would increase Islamic discontent around the world, and destroy any chance of diplomacy. The Oxford Research group in a study called Iran: Consequences of a War concluded, "A military response to the current crisis is a particularly dangerous option and should not be considered further. Alternative approaches must be sought, however difficult these may be." The fighting of a ground war after the bombing would require an additional 100,000 troops. The fighting would involve Israel, Lebanon and various Gulf States. The report predicted 10,000 Iranian scientists and technicians would die in the bombings.

In a similar briefing before the invasion of Iraq in 2003, the Oxford group predicted that Saddam Hussein's regime could easily be overwhelmed but that the country would become a hotbed of insurgency.

al-Sadr, a powerful Iraqi Shiite leader, with his own militia, was in Iran last week to express solidarity against a US or Israeli invasion.

This policy is not only a Rumsfield plan. It has bipartisan support.
RENEGADE EYE
Posted by Frank Partisan at 10:56 PM

I would listen to those guys. They were right before.

Terrorism is a game US can play too.

The Oxford Group's prognostications mirror my own concerns about a pre-emptive nuclear strike against Iran. While we are the single most armed country in the world, we are not the most paranoid. America is getting scarier and scarier to deal with and even the U.K. is having to step back from us.

An Iran nuclear strike would throw down the gauntlet and say that anyone who tries to arm themselves will be "shot." That won't play well in the Muslim World and I can't imagine China and Russia -- which, combined, would be match for our arsenals -- would miss an opportunity to usurp us as 'the World's only Superpower.' Hell, it wouldn't have to be through official channels even. Nuclear devices could hit the black market from parts unknown and do some serious damage to us, which then would focus our inept leaders' attentions on Iran, or some other non-culprit, that pisses the Muslim World off even more, which means we would have to try to conquer more Islamic nations to get things under control... pretty soon this 'Wag the Dog' scenario has us establishing military installations willy-nilly, spreading ourselves thin and boom! In walks Russia or China or both, who could strike against us in the world community almost without impunity because we would be perceived as a rabid dog.

This is just madness, there is no point, reason, or justification to attack Iran.

I remember when attacking Iran was a joke of the 'whose next?' sort.

It better remain that way or I'm off to Iran to kill me some whitey.

OK, so we agree that it would be madness to attack Iranian nuclear facilities. So now we can just sit back, relax and do nothing while they build some nuclear bombs and follow up with some sophisticated delivery systems. Their president was only "kidding" when he said he wanted to wipe Isreal of the map, right? Isreal will not retaliate if provoked, right?
This is starting to look like the old pattern of who is going to solve the world's toughest problem again. Notice how the Europeans have handled it so far? It's again that time when every concerned nation takes a step backward to the rear and lets the USA once again "volunteer" to be the world's policeman. The USA will again need to sacrifice its human and material resources because no one else has the "cojones"to do so. On top of this, the criticism will start anew from all the far left wingbats and our beloved UN and European "allies" about violations of human rights, torture, international law and how we should have waited a little longer for diplomacy to have a chance. Isolationism is starting to look good to me.

I have to say I support doing something about this situation. I know, unusual for a peacenik like me, but I can't help but believe that the dangers associated with an attack, and even the lack of moral foundation for the attack, are outweighed by the risk of a nuclear Iran, especially with Ahmadinejad at the helm. I was surprised to find that when I posted on this article, everyone said I was nuts for wanting to go after him. I think in both your blog and mine, the comments were more informative than the article (save the map, which is really interesting).

If Ahmadinejad makes some concessions toward more rights for secular thinking, and stirs nationalism and self dtermination, he will get moderate Iranian support. I'm starting to find him a savvy politician. His actions have to be read between the lines. Hard to tell when he is bluffing.

To Roman: You don't even have Blair on board. Thank goodness we have no left wingbats here.

Scary...
I think I need another caipirinha after reading this.

Many a false step is taken by standing still – Chinese Proverb

What to do about Iran? I don’t know! Experts much smarter than I and well versed on the subject have been contemplating the question for years. In my admittedly parochial and perhaps unsophisticated way of trying to find answers to difficult questions, I often go back to, what would work in the “neighborhood.” What I come up with there isn’t very comforting.

From our perspective, we’re in a tough spot. Because of our economic growth, we are funding Iranian sponsorship of terror and nuclear research. President Ahmadinejad’s recent statements and the Iranian theocracy’s intolerance of the West and Israel make it difficult to conceive of living with a nuclear armed Iran. It would be irresponsible. Persian rhetoric and actions, including the enhancement of their ballistic missile capability, is a volatile cocktail that can’t be left unattended.

By the way, all this talk of leaving Iraq business is a pipedream. One of the principal reasons for invading the country was to establish permanent basing there. As the Oxford Research Group study points out, we have established two permanent military facilities in Afghanistan now, one on Iran’s eastern border. We have Iran, as it were, surrounded.

Those who suggest we’ll make Iran and the Islamic world upset if we or Israel, take out their nuclear facilities forget that they were pretty upset before our invasion of Iraq. So upset in fact, that they killed 3,000 people indiscriminately. I guess the argument is that if a cartoon can generate the violent response we’ve seen, what would trying to keep nuclear weapons out of the hands of a maniacal regime produce?

Those who call for tolerance and understanding fail to realize, that while the thugs that have hijacked this “religion of peace,” would thank them for their support just before raping your wife and daughter before you, prior to slitting your throat.

The ORG report talks about the high number of casualties and how Iran would attempt to destabilize Iraq if we were to bomb their facilities. What are they doing now? Bernard Lewis, the leading Western expert on Islam and the Middle East, in several of his books on the subject, contends that the clash is inevitable. There is body of thought in Islam, particularly strong among many Persians, that wants to restore the faith to its pre thirteenth century prominence.

The ORG report also doesn’t suggest that inaction will solve the difficulty. The head in the sand approach only assures us that it will be blown off when attempt to raise it. Sonia may have the answer. Assassinations, sabotage and less covertly, through a naval embargo against exports of Persian oil (which would produce the unhappy effect of driving up prices in the West) may be the best course of action. I don’t know what to do, but I know we must do something.

Bernard Lewis, the leading Western expert on Islam and the Middle East (...) contends that the clash is inevitable.

However, US should choose where to fight, and attack openly only where the enemy is weak. Iraq and Afghanistan were such places. Iran isn't.

Economic sanctions didn't work with Saddam, because he wasn't elected and Iraqi had no electoral mechanism to overthrow him. In Iran, there is such a mechanism, and if Ahmadinejad's adventurism will lead to a grave economic crises, the Iranian public might turn against him.

Over half of the population of Iran is under 30 and desirous of Western style freedoms. A substantial percentage of the population also views the pursuit of this technology a matter of national and religious pride. This is the challenge.

As far as elections, it is true that elections are held in Iran, but only candidates approved by the clerics may compete. Ahmadenijad, for example was elected winning only 20% of those eligible to vote. It is not clear that sanctions would produce a more moderate electoral result.

Your analysis on attacking them where they're weak is more compelling than anything I've read. Although I think that selected assassinations would produce the same antipathy that bombings would, especially if they were conducted on the scale required to set back their capacity to build a nuclear weapon.

By the way, the thing national security types are focusing on is not a bomb that would cause nuclear fallout, but a bomb exploded in the atmoshpere designed to knock out the electrical grid. All of our systems, economic, health, security are predicated on having a functional electriticy grid. This would put us back to the stone ages.

I linked this one on my site, which was immediately picked up by Booker Rising, a libertarian site.

I have read both reports and denials of a scenario like this. When US invaded Iraq, one weakness was lack of the use of Turkish airspace. There are talks at high levels at this time.

1) The use of airspace in Turkey with only minor protest, in exchange allow Turkey to invade Northern Iraq if Kurdish take control.

2) The young population allied with USA, is a concept I believe was true. Now after all that is happening in Iraq, I don't think it's as true as it was.

Another aspect is that it would set back energy supplies to rising powers India and China.