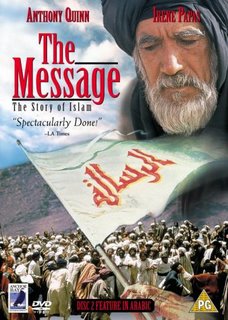 There never was a Muslim equivalent to a movie as The Greatest Story Ever Told, or even an Islamic Mel Gibson. Syrian Born movie director Muslim American Moustapha Akkad, in 1976 tried to fill the void.

Mohammad was never visible on screen. The camera was his eyes. A biopic starring The Invisible Man. It was rumored in the Islamist world, Anthony Quinn was playing Mohammad.

In March, 1977, Black Muslims in the US took 149 people hostage and demanded that The Message be banned. The siege ended with one reporter dead and loads of hostages beaten, stabbed or shot.

Quotes
Abu Sofyan: Mohammed, there is still doubt in my heart.
Khalid: If we were to cut off your head, it would remove all your doubts.

The movie was nominated for an Academy Award for its soundtrack.

The bottom line is we must defend free speech. George Bush's recent criticism of the Danish cartoons, rather than defending artistic and journalistic freedom, shows his priorities. No compromise on the right to print unpopular opinion.

Hat trick to great Polish blog the beatroot. It is a great read.

"The bottom line is we must defend free speech."

Yes. The bottom line is we must defend free speech, and, in kind, the right to criticize idiotic free speeech.

I don't bother listening to George Bush, because I can be sure whatever he says is inane, simple, calculated, ultra-hypocritical grandstanding, but criticism of the Danish cartoons is warranted. They were hoping to incite and outrage, nothing more.

I wonder how this "throw-way-back" to "The Message" came about? Seems, maybe, the idea here is to single out a particularly aligned group of zealots... when there are plenty of other flavors zealotry to be made an example of?

Actually, Bush was a bit more clever (or tried to be, anyway). He let his State Department spokesmen suck up to the Muslims by condemning the cartoons, while he himself has made some pretty reasonable speeches about ending the violence and respecting the free press. Pretty hypocritical if you ask me...

I was in New York yesterday and my driver, a naturalized Romanian had a very interesting conversation that you would've appreciated.

Mukov - Sorry, but the "throw-way-back" to "The Message" thing was my fault. I was just trying to do the subject in a different way. The blogs are humming with this one, and it's all much the same thing. So I was trying not to repeat other blogs.

But wouldn' it be great to do a Mohammed biopic? Spike Lea could direct.

Like mukov, I wasn't too much concerned what Bush thinks of this one. However, I do think there are all sorts of forces involved. Such as ...

The cartoon was originally published last September, was then published by an Egyptian newspaper a few weeks later. At the time, the imams in the Middle East had their words of condemnation issued and that was pretty much that. However, a rather nutty Danish-based imam then believed that this Western decadent belief of freedom of speech needed rather more than words of condemnation so he has spent the last few months touring the Middle East brewing discontent among the alienated, naive and always-ready-for-violence islamic youth of the region.

This then brings us to the nub of the problem:

The islamic fundamentalists have now eventually reacted in the way that they believe the west always expects them to react. And, bye the way, those in the occupied territories must be thinking: "Okay, we carry out the west's democratic wishes but still they threaten us with sanctions because they don't like the way we vote."

And, on the other hand, we have the West portraying themselves to their own electorate as a the voice of moderation - calling for respect for culture and religion from newspaper publishers and also condemning protests.

Which eventually gets me to my point (at last you all say). Foment unrest in the middle east/afghanistan, etc, sit back and watch this unrest escalate while, at the same time, softening up the western world for future military adventures, and then steam in to the Middle East on the pretext of peace-keeping.

And it also gets me to my other point - islam, like all religions, is nuts. That a depiction of someone who doesn't exist can stir up threats of violence and create unrest in many parts of the world is totally bonkers. It's a bit like the children throughout the world rising up against adults who tell them in cartoon form in a newspaper that Santa Claus doesn't exist.

Sorry for the extra-long comment Renegade, but had to get that off my chest somehow!

renegade, with all due respect, I disagree with you.

Quoting just a piece of chat from a movie doesnt do justice to the whole context. Who knows what followed and what preceded?

If somebody is abusing verbally one's sister or brother or father, what should one do?

Just tolerate or ignore the abuser, because its freedom of speech?
Or
Slice him down into peaces?

I reckon, both above appraches are wrong. one should protest vehemently without resorting to violence.

No-one's brother, sister, mother or father was being abused you fuckwit. What was being abused was some nutty crackpot mythical figure. Protest about a fucking cartoon? You must be bonkers!

A plague on all their houses, I say.

The only thing under attack by all this nonsense is secularism - and that makes it all very scary.

I declare a war on religion, whose joining me?

ive never heard of this movie. i may have to check it out. thanks for hitting up my blog!

There is nothing positive about the cartoons. I wouldn't draw them, or post them. I thought they were racist and offensive.
1. We need to defend freedom of the press.
2.The best way to combat them, is with positive cartoons.

Where it gets interesting, is Ahmadinejad, mentioning cartoons about the holocast. The heat went from Denmark, to against Jews. Read Scottage's assessment at http://scottageb.blogspot.com/.
His take is unique on this matter.

I don't have a religious bone in my body. I'm at war with the political manifestations of religion. I'm against violence over the cartoon issue, I formed this blog to support pulling the plug on Terri Schiavo, I'm against "Under God" in the US pledge of allegiance etc. War on religion, doesn't have a good sound.

Thanks for the vote of confidence, Renegade. I'll try to live up to it by getting as much info as I can and writing up my take, as long as you do the same on Haiti and other topics :-). As always, enjoying your site.

I'm also for free speech but this isn't really about free speech issue.
I'm sure you've read it by now that the same danish paper rejected cartoons lampooning jesuse because they thought the cartoons would "provoke an outcry."
Here are couple of articles that might be of interest to you :
http://www.asiantribune.com/show_article.php?id=3004
http://bellaciao.org/en/article.php3?id_article=10253
http://www.salon.com/opinion/feature/2006/02/09/culture/index_np.html

Since when did religion have an ethnicity? People from all ethnic backgrounds can be muslims, so why do (mainly) white people say that this is about racism? The protests are about the depiction of a prophet. So what would level-headed people think if protests were organised about the depiction of Jesus or Santa Claus for that matter where the participants called for the death of people in their city. I had people in my city last week saying that me, my loved ones and everyone else who lives here are getting another 7/7 as a result of some inconsequential newspaper in another country publishing a fucking cartoon. Don't you think I would be a bit pissed off and angry about that?

I read at Sonia's blog about Michelle Malkin, being strongly for defending the cartoons.

I hate those cartoons, but defend their right to be published. I also support an art gallery's right to show a crucifix in piss. That is not Michelle's position.

I think it's like you get to see what they want to show you. There's a bit too much of politics in this world these days.

They all hide behind a mask. It's really hard to say what's right and what's wrong.

My point is that; there should be limitations. It's simple: Just like you have to stop when the traffic light is RED, and move on when GREEN. If you don't follow the light, bad things will happen.

I think people are now confused between Peace and Freedom. I would pick Peace any day than Freedom - because it makes my brain keep cool and working.

PS::: I was not refering to any religion, so don't get confused there. I as a HUMAN!