Greece On The Brink of Revolutionary Situation 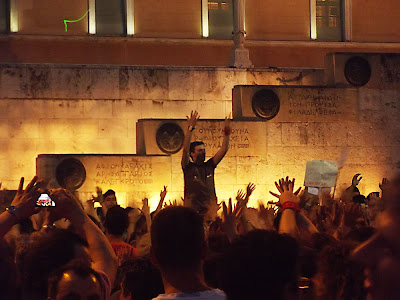 Yesterday a milestone was passed in the social and political situation in Greece and throughout Europe. Impressive mobilizations rolled across the country: half a million in Athens and rallies of thousands of people gathered in Thessaloniki, Patras, Larissa, Volos, Heraklion, etc. This places Greece on the threshold of a revolutionary situation. It means that, for the first time in decades the developed capitalist countries of Europe are faced with the prospect of a revolution with continental dimensions.

Bwah-ha-ha-ha-ha! The commie wet dream moment has arrived... and instead of seizing the moment, they scatter like fightenend mice.

"It's no my yob!" should be the Left's new manifesto.

I don't know how much impact a potential revolutionary situation in Greece would have on the rest of Europe. They've been somewhat economically backwards ever since their liberation from Ottoman control and have never really asserted themselves as a major political influence in the region. Who knows, though.

But these people have the all to demand the return of the Elgin Marbles and insist they are able to take care of them. ROTFLMFAO

Ross: Last week it was Spain, before that Portugal. It started with Iceland.

Joe C: I think the left should get behind Sarah Palin, the hopey changey thing, slows revolution.

Pagan: Anything sets you off ROTFLMFAO.

Despite the chain of revolutionary events, I still have my doubts that this is the final death-knell of capitalism. The capitalist world-system is extremely flexible and capable of stabilizing peripheral disturbances such as these. I enjoyed reading Alan Woods' little piece on "Why We Are Marxists," and obviously agreed regarding the parts about humanity's capacity to build a better social form than the present. His analysis of Marx's prophetic prediction of the spread of capitalism was also completely accurate.

I think the parts that heartened me the most, however, were the ones in which Woods held back from stating the absolute imminence of global revolution:

Of course, we must not exaggerate: we are still in the early beginnings of a process of radicalisation. But it is very clear here that we are witnessing the beginning of a change of consciousness of the masses. A growing number of people are questioning capitalism.

It is my belief that while the current revolutionary grumblings are not insignificant, the crisis will have to deepen and become more extensive, and last a longer period of time. Only in this context can an anti-capitalist consciousness emerge. And in the meantime we must be wary of ultra-rightist dangers rising up and proposing a "third way" out of the crisis. This is precisely what led to fascism in the interwar period.

Ross, I could explain to you why you are living in a dream world, but I doubt you would ever get it.

You all are like bad parents of the worse kind. You're the kind of "parent" who promises his "kids" the world if they will just do what's right. The kid does what he's told, only come to find out, he doesn't get shit for it. Instead he gets told, "no you can't have that, it's bad for you."

So the kid says "but you promised", and the bad parent says "well I just wanted you to do the right thing. Now that you've done it, doesn't it feel good, and isn't that its own reward."

If the kid is like a lot of people, enough of that kind of stuff and the parent is going to get a kick in the nuts and a chair up the side of his head before his ass is air-mailed out the window.

Even Hitler had to stop the fascists at a point. In the end Hitler ruled as a Bonapartist. Capitalists even fear fascists.

Pagan: Capitalism lost its promises. Nothing it fears as raised expectations.

Speedy: You're too young to know, that capitalism did offer promises at one time.

lol! You'll have to show me an old advert for "capitalism".

"Try the new and improved capitalism, now with "perfecto", an ingredient developed by scientists in a lab and guaranteed to make your life, perfecto!"

Some Marxist seeks to invent a "kinder/better" form of capitalism and you think that THAT is an advertisement for capitalism, and not MARXISM? lol!

Marxism is ALL about stealing a slice of someone else's pie.

Come to think on it, "Perfecto" is a LOT like the old "Regulato"... only it's a passive ingredient instead of an active one. ;)

Instead of the government TAKING money away from the capitalist, they're encouraging him to "GIVE IT AWAY".

I do like the new approach MUCH better! It's like the "old days" of capitalism 1.0 when "charities" handled social service programs (ie - Salvation Army) instead of government agencies and bureaucrats.

In other words, socialism SHOULD be completely voluntary and not compulsory.

“Government is not reason. It is not eloquence. Government is force; like fire it is a dangerous servant -- and a fearful master.” —George Washington (1797)

No, Marxism is making you bake the pie, then letting you have maybe one slice out of every ten you make. Then by the time you wake up the next day you have fifty people lined up outside your door waiting for their slice.

“The people never give up their liberties but under some delusion.” —Edmund Burke

Of course the Left's approach to socialism is NOT voluntary. They threaten to take everything by revolution/ force. In many respects it's the most IMMORAL approach to imposing MORALITY upon a society. The barrel of a gun... ALL dissenters to the gulag and/or ovens!