Syria: How Far Has the Revolution Gone?

Written by Mousa Ladqani
Wednesday, 11 May 2011 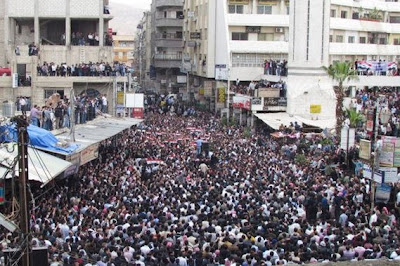 The revolutionary uprising of the Syrian masses has left many among the Syrian left confused and perplexed. Many of the so called “progressives” and “lefts” have taken a negative attitude towards the revolutionary movements, in some cases going as far as repeating the propaganda of the regime regarding “an imperialist conspiracy”, “Muslim extremists”, and “agent provocateurs”. But all this completely misreads the situation.

Insanity: doing the same thing over and over again and expecting different results. --Albert Einstein

I suppose some fellow leftists are consistent in that it doesn't matter a jot how vicious a regime is, just so long as they are anti American... or Anti Israeli.

Blogspot had a software problem yesterday, causing some posts to be deleted. This one was deleted, but has now reappeared. There were a few comments earlier, that Blogspot deleted.

Though I am unsure what form of government would replace them, I would be glad to see the Ba'athists in Syria go. Apologists for this regime forget how they undercut and massacred the true leftist elements of Syria back in the late 1950s and 1960s. It brutally repressed the Syrian Communist Party (SCP) for its emphasis on class struggle. There was only a brief window in the 1970s where the party was even made legal again, but that didn't last long. Arab Socialism was a disaster for the entire Middle East, shutting out the truly internationalist elements of the Left that had existed there. If the Ba'athists go down, I say good riddance.

On a completely unrelated note, Ren, would it be all right if I posted one of my more historical/theoretical papers on capitalism after this article has run its course?

This is from a recent article on Marxist.com about the life of Nasser: Behind the rhetoric about “Arab Socialism”, there was a utopian attempt to create “capitalism with a human face”. On the one side, the state sector was massively developed. But no real planning existed, and there was no participation from below. Many state bureaucrats in charge of the nationalized industries – strengthened in the Nasser period with restrictions on imports – later pressured for more privatizations (naturally with themselves or their families as private owners) in order to sell off the assets and get a quick profit.

I think the Baath Party will be swept into the dustbin of history, but it'll be longer than most predict. Academics think revolution is an event, or a military event, when it's a process.

Behind the rhetoric about “Arab Socialism”, there was a utopian attempt to create “capitalism with a human face”.

...Then what is communism but just another utopian attempt to create "socialism with a human face"?

The 2nd derivative of "unreality".

...the movement from a society based upon "sovereignty" (capitalism) to one of "punishment (socialism)" to a "society of control" (communism).

The totalitarian Left is more than a just dream...

...it's a "revolutionary" (circular) process!

Take a ride on Ixion's wheel. Look, there are Karl Marx and Leon Trotsky making the wheel revolve faster and faster! Whoopee!

The point about "Arab Socialism" just being an attempt to give capitalism a human face is completely accurate. Nasser's pan-Arabism was a disaster, as any such facile nationalism deserves to be.

Anyway, Ren, I would like to get your opinion on the latest piece I posted on my blog. It was the thing I was thinking about for here, possibly. Like, I'd like your opinion, not just if it's appropriate, but if you agree with its basic premises.

The right wing method is adding words that aren't there.