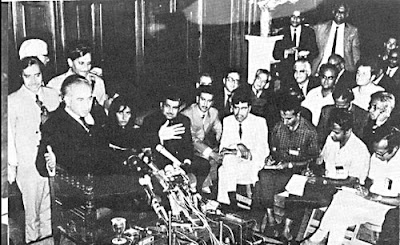 Thirty two years ago on the night of 3rd and 4th April 1979, Zulfiqar Ali Bhutto was assassinated on the gallows in Rawalpindi jail. This was probably the most significant political murder in the history of the country. A terrified state, headed by the country’s most brutal and vicious dictator Zia ul Haq carried out this harrowing act.

“The main flaw of Bhutto’s policy doctrine was that it was based on two contradictory and irreconcilable ideological foundations, socialism and nationalism”.

Perhaps one of you Leftist genius' could kindly explain to me the Marxist dialectic which renders the two ideological foundations "irreconcilable". Is it merely the fantasy of the state disappearing after the capitalist apocalypse that leads one to Marx's Revelation of a socialist/ communist Nirvana?

If you were to ask me, socialism lies at the very heart and foundation of EVERY international capitalist corporation v. state government argument and gets "reconciled" via a system of "corporate taxation" and "regulation" in exchange for worker/ retiree benefits and whatever other "social goods" that the nationalist bureaucrats can buy with the money extracted under threat of shutting the capitalists down and forbidding them to operate.

But there I go again, mixing a bit a Ying with every Yang, whilst the Commie "purist" Trotskyites moan and pine for their "direct representation" stateless internationalist utopia....

Just as "gravity" represents the warp in space-time, socialism is the warp between nationalism-capitalism.

And this "warp" is VERY reconcilable.

it was based on two contradictory and irreconcilable ideological foundations, socialism and nationalism

Too bad nobody told Hitler that nationalism and socialism were "irreconciable" when he decided to join the National Socialist German Workers Party back in 1920...

Unfortunately, those two ideologies are very "conciable" and their mix is very deadly indeed...

The Pakistan People's Party was already built on shaky foundations, which led to internal struggles and divisions prompted by international ideological conflicts. Besides its overtly Leftist components, the PPP included ex-members of the Muslim League, a politicized student population, and regional landlords. The Sino-Soviet split formed parallel split within the Leftist labor movement in Pakistan, so even the militantly unionized elements of the party were at odds with one another. My sentiments are largely the same as those of Atiya Khan, who wrote an article on "The Poverty of Pakistan's Politics (PPP)," which detailed the steady collapse of the Left and further political degenerations that have taken place in that country. Bhutto was in an impossible position, and his combination of socialism and nationalism reflected the old Stalinist dictum of "socialism in one country." His term in office was almost doomed from the start with all of these contradictions that existed in his party, which were exacerbated by the worldwide economic crisis of 1973 and the simultaneous Bangladesh War that broke out.

Bhutto's career resembles that of another national-socialist leader undeservedly loved by the naive leftists: Salvador Allende.

Both Bhutto and Allende, trying to take control of a previously apolitical military, rapidly promoted radical and opportunistic military officers. Allende promoted Pinochet from a minor commander of a remote military base to Commander in Chief in barely 3 years. Bhutto appointed General Zia to replace General Tikka Khan as Chief of Army Staff, surpassing five generals senior to Zia.

Unlike another national-socialist leader, Hitler, who always kept his generals on a very tight leash, Bhutto and Allende were both betrayed and killed by generals they themselves promoted and favored over more senior, but apolitical, military leaders.

They were slaughtered by their own attack dogs. And they deserved it.

Both Allende and Bhutto's overthrow got help from the US.

I would call Allende and Bhutto, like Chavez, accidents of history. When Marxists don't lead, people like that arise.

Ross: Bhutto's son who was assasinated, was friendly to my group.

The PPP includes even pro-feudal elements. Everything you say about them is true.

A few years ago millions rallied for the return of Benazir Bhutto. That is because workers and peasants support the PPP's socialist program. Our group has thousands of members, and hundreds of chapters there, because of being the Marxist wing of the PPP.

Last year the PPP rigged elections against us winning again.

The PPP had a socialist program when Ali Bhutto was in power. It is good enough for the left to rally around it.

Again I ask you, what is your position towards mass parties, even imperfect as the PPP?

My stance toward mass movements is this: some coalitions aren't worth being a part of. What seems to me far more important, even before making inroads into large-scale political movements, is the reconstitution of a strong international Marxist Left. And not in the least developed nations, but in those nations where capitalism is most developed. Socialist revolutions along the periphery of global capitalism are only worthwhile if they might realistically lead to similar revolutions in the most advanced capitalist nations.

Once a strong Leftist current, institutionally reorganized around a common agenda: the overcoming of the capitalist social formation. It must reevaluate the current historical situation and provide a proper theoretical analysis for it, before determining what the proper course of practical action must be. Only at this point might real progress be made at cultivating an anti-capitalist consciousness in the major capitalist nations. Socialism can only exist on a worldwide scale.

Nationalism and socialism is a contradiction, and dialectical

The Many and the One are dialectical.

Socialism and Individualism are dialectical.

There's only one REAL reason why the UNION division of the Communist International REQUIRE internationalism, and that's FEAR of competition.

Competetion is what NATURE is ALL about. And PREVENTING competition is what UNIONS are all about.

Evidently REVOLUTION is only a good thing if it brings about anti-competitive UNION favorable changes.

So, after all, there was not one kind of Strife alone, but all over the earth there are two. As for the one, a man would praise her when he came to understand her; but the other is blameworthy: and they are wholly different in nature. For one fosters evil war and battle, being cruel: her no man loves; but perforce, through the will of the deathless gods, men pay harsh Strife her honour due. But the other is the elder daughter of dark Night, and the son of Cronos who sits above and dwells in the aether, set her in the roots of the earth: and she is far kinder to men. She stirs up even the shiftless to toil; for a man grows eager to work when he considers his neighbour, a rich man who hastens to plough and plant and put his house in good order; and neighbour vies with is neighbour as he hurries after wealth. This Strife is wholesome for men. And potter is angry with potter, and craftsman with craftsman, and beggar is jealous of beggar, and minstrel of minstrel.

...or in the words of a shift-less Union Man, "Works and Paid Days Off"

Ross: Socialism in Pakistan, will have reverberations in Afghanistan, Iran, Bengal, even India.

History shows contrary to what Marx desired, that the weakest links move first.

A country like Pakistan can't alone be socialist, it could be a base to spread revolution.

History shows when workers move, the first place they go to is traditional groups. In France68 workers joined in the thousands the Communist and Socialist Parties. They aren't going to join a sect.

Look up Liverpool and the Militant Tendency. Our group politically controlled that city in the 1980s.

Titan: You're all over the place.

Individualism v. Communism is a different sort of dialectic. It's a dialectic of Absolutes, an All or Nothing (as proven by all it's defenders here who state that "real" communism has never been achieved). It's a variant of Plato's "Parmenides" dialectic of absolutes, "if one is not, then nothing is". It's the very definition of utopia... a "no where".

And so socialism v individualism is a more practical, REAL-WORLD dialectic. It's a ratio relative to a group. That group can be a union. It can be an "incorporation". It can be a club. It can be a country. It can be mankind.

But to say that the social grouping CAN ONLY be "international" renders the concept again, one of "absolutes" again... an ALL or NOTHING. A utopia - a nowhere. Not a practical or real world dialectic, but a dialectic of absolutes (metaphysics).