Yemen Revolution: Saleh Regime on the Verge of Collapse 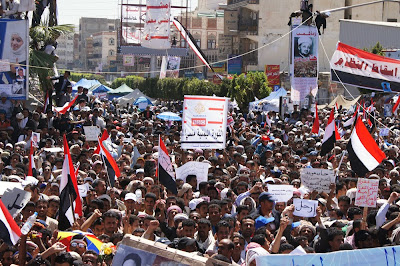 Following the regime’s brutal massacre of protestors on Friday, March 18, the revolution has moved forward in Yemen. The state apparatus has split, and most of the army has turned against President Saleh. After the repression failed to achieve its objectives, the ruling elite and the imperialist powers are desperately trying to find a “safe” alternative. But that will not stop the revolution.

U.S. policy in Yemen has been utterly directionless and overtly militarized - enabling the very power vacuum now expanding AQAP's reach. Saleh and Washington can hold out as long as they wish, but they will eventually pass out instead. Soon Yemenis will face the same struggle as Egyptians, as they attempt to cleanse the remnants of Saleh's regime. I believe Yemen's opposition realizes how much power is at stake, and no side wants to void its seat in the transition. Peer pressure is transforming interconnected uprisings into a stabilizing force.

He’s done for, in my opinion. It’s interesting how so many of these dictators started promising reforms (Bel Ali, Mubarak, Abdulla of Jordan, al-Assad, the Bahraini monarchy) but too late. Then when the killing starts they lose trust from most of their citizens. Saleh must go: no one can possibly trust him anymore.

The only real exception so far has been Libya: Gaddafi's decided to battle it out, at least until further notice...

James: I agree with your assessment. I doubt if old generals will meet the needs of the youth and workers.

Gert: He is trying to be kept from a tribunal.

I'm surprised we didn't try to prop him up. The Saudi royal family must feel they can install an appropriate replacement.

They don't want anyone getting any more frisky on their border, especially when they're occupying Bahrain.

But all over the M.E. people are losing their fear of the dictators and that can't be stopped.