I usually have disagreements with Barry Sheppard. He is insightful on Libya and the Arab Revolution. 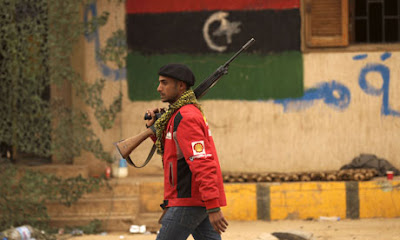 A Libyan rebel walks past a military position decorated with the rebellion flag at the southern entrance to Benghazi. Photograph: Patrick Baz/AFP/Getty Images.

What is the context in which Libya must be placed? Or to put the question another way, could the civil war in Libya and the US military assault have happened four months ago? Of course not. Neither were even remote possibilities in anyone’s mind four months ago.

RENEGADE EYE
Posted by Frank Partisan at 12:01 AM

Here we must respectfully disagree. A CIA sponsored turf war for control of extractable resources is not a revolution.

The who matters, especially here.

This article perfectly captures the current ideological chaos surrounding the Arab revolts. When Hugo Chavez and Ann Coulter find themselves on the same side (defending Gadhafi's regime), something is odd indeed.

Essentially, Sheppard is right that the Libyan rebels should be supported. And he is right to denounce Ortega, Havez and Castro for their pro-Gadhafi stance (which reminds me of Castro and Ortega support for the fascist Argentinian junta during the Falkland War against Margaret Thatcher's Britain).

But what Sheppard clearly doesn't understand is the real nature of "imperialism" that he instinctively, but ignorantly, denounces. In his muddled perspective, Gadhafi was a good good from 1969 until the 1990's, when he made deals with the West, conveniently forgetting his reign of terror from the very beginning of his reign.

In essence, Sheppard doesn't understand that Gadhafi, Castro, Havez and Ortega are far worse (and murderous) that all those alleged "imperialists" Sheppard is stupidly rambling about.

Jack Crow: Thank you for visiting. I enjoy your blog.

What is a revolution? According to Trotsky: The most indubitable feature of a revolution is the direct interference of the masses in historical events. In ordinary times the state, be it monarchical or democratic, elevates itself above the nation, and history is made by specialists in that line of business - kings, ministers, bureaucrats, parliamentarians, journalists. But at those crucial moments when the old order becomes no longer endurable to the masses, they break over the barriers excluding them from the political arena, sweep aside their traditional representatives, and create by their own interference the initial groundwork for a new régime. Whether this is good or bad we leave to the judgement of moralists. We ourselves will take the facts as they are given by the objective course of development. The history of a revolution is for us first of all a history of the forcible entrance of the masses into the realm of rulership over their own destiny.

A revolution is not all good guys against all bad guys.

Gaining democracy, even in an imperfect way, would be a step forward. Winning democracy would lead to wanting to win more.

I like that he is supporting the Arab Revolution, without worrying about it being perfect by the book.

I oppose imperialism entering Libya. They are there to disorient the revolution. They seem happy to install former Gaddafy government people.

Imperialism has more blood on its hands, than Gaddafy.

The left doesn't fully understand Bonapartism. My tendency elevated that idea, that came from Marx and trotsky.

Whether this is good or bad we leave to the judgement of moralists.

Well, this "moralist" has yet to see a single revolution that has actually improved the lives of the people.

Imperialism has more blood on its hands, than Gaddafy.

No kidding. That's like saying "Murderers have more blood on their hands, than Hitler"...

Sonia, how do you reconcile antagonism toward the American Revolution, and similar republican style revolutions through history, with support for the Libyan rebels, whose support for republican democratic principles are questionable? Or is it just democratic revolutions you have a problem with? Or are they some kind of exception? Or is it just visceral dislike of Qaddafi (which I could certainly relate to)?

There is life, there is death, and then there are situations where one is preferable to the other. Living under a corrupt monarchy, or an autocratic, dictatorial regime be it theocratic or secular, would be examples of better off dead in my book. If the American Revolution had somehow cost one hundred million lives, it would still have been worth every one of them if it insured that future generations would be able to live less miserably, and in liberty.

"Live Free Or Die!" That's a concept I guess would be difficult for you to comprehend, being an apologist for the Russian Czars and what not. While I concede the fact that they were better than Stalin, or any communist system for that matter, they were still not quite good enough.

I am loyal to no government, yes, including the American government. I am loyal only to the principles of the Constitution, which is superior to any of your living gods known as Pharaoh, King, or Czar. Or General Secretary.

how do you reconcile antagonism toward the American Revolution (...) with support for the Libyan rebels

Simple. Look at the flags the Libyan rebels are waving. Those are flags of the Libyan MONARCHY, overthrown by Gadhafi's SOCIALIST REVOLUTION in 1969. Libyan rebels are counter-revolutionaries, just like East European oppositionists in 1989, looking to restore an older (and better) form of government that they recall with nostalgia.

If the American Revolution had somehow cost one hundred million lives, it would still have been worth every one of them if it insured that future generations would be able to live less miserably, and in liberty.

The American revolution didn't free anybody. The slavery remained. In fact, it lasted longer, because US abolished slavery a long time after the British Empire. And hundreds of thousands of American loyalists fled from Boston, New York and Philadelphia towards Toronto, Halifax and Montreal. And 180 years later, hundreds of thousands of children of the American Revolution fled towards the Canadian monarchy again, to escape the draft and Viet Cong bullets.

It's always like that - people escaping from revolutionary republican "utopia" towards "corrupt monarchies"...

Bullshit, Sonia. How many people do you know of coming FROM America versus coming TO America? Frankly, I wish it WERE the other way around, but it is what it is. When I stop to think about what this world would have been like over the years with the US, it is a very chilling thought. You just plainly don't know what you're talking about on this issue. Either that of you're living in some fantasy world where with but a change of fate you would be some kind of fucking Czarina lording it over the adoring, unwashed masses. Give it up, Sonia, you're making yourself look stupid with this shit.

How many people do you know of coming FROM America versus coming TO America?

You forget that all those people coming to United States come from countries where revolutions were far more bloody, destructive and RECENT than American Revolution: Mexico had its revolutions in the 1820's, the 1860's and the 1910's. Salvador in the 1980's. Costa Rica never had a revolution. How many Mexicans and Salvadorans came to United States ? Tens of millions. How many Costa Ricans were caught crossing the Rio Grande ? Not a single one.

And nobody was coming to United States in the 1780's and 1790's (except on slave ships).... Certainly not from Mexico (which was a monarchy back then). But plenty of Americans fled from the United States and settled in northern Mexico while it was still a monarchy. And when it was no longer a monarchy, they revolted against the new republican revolutionary government in Mexico. That's how Texas was formed.

Read your own history.

If not for the US, the entire western world would not be able to step out of their houses without staring at a giant poster of either Hitler or Stalin. That's all I need to know.

If not for the US, the entire western world would not be able to step out of their houses without staring at a giant poster of either Hitler or Stalin

That's true. But the good and altruistic USA saving the world from Hitler and Stalin is a RECENT USA, long after it outgrew its radical revolutionary past. In 1793, US was an ally of the murderous Robespierre regime and its reign of Terror. In 1812, US was an ally of Hitler's predecessor (and inspiration), Napoleon. In the early 19th century, the radical American revolutionaries exterminated most of their Indian population and enslaved the Blacks.

I have a new post up, and the discussion can continue above.

Sonia's instincts are correct in relationship to her ideas. The leaders of those against Gaddafy are not revolutionaries. This started as a revolution, but now a counterrevolution is occurring.

When people get so frustrated, that they have to change their daily routine, they resort to revolution.

Slavery decreased after the American Revolution by 10%. The revolution continued with the Civil War, and slavery was abolished. The next revolution is overthrowing capitalism.

Slavery decreased after the American Revolution by 10%.

Completely false. It increased exponentially, especially after the decline of Egypt as a cotton-exporting country. There were far more slaves (as percentage of the population) working for American radical revolutionaries than for British colonists before the Revolution.

revolution continued with the Civil War, and slavery was abolished

Completely false. The only states that had revolutions during the Civil War were slave-owning Southern states. The Northern anti-slavery states didn't revolt and remained loyal to the central government.

In 1861 (like earlier in the 1770's), the revolutionaries (people overthrowing the legal government) wanted to preserve slavery.

Sonia-you might as well get used to it, the American people are never going to renew their loyalty to the British Crown, neither to Elisabeth (whom I do greatly admire, by the way), nor to that nitwit son of hers. That's one of the very few things conservatives and liberals can agree on. Get over it.