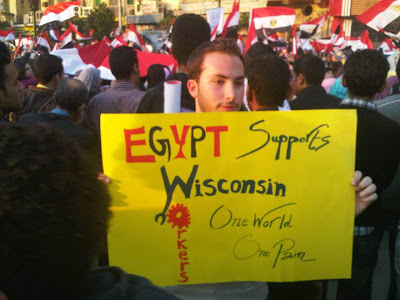 The Left desperately needs victims to generate "sympathy" for their cause. Unfortunately for the "legitimate" Union centrally-organized Left (NOT a "grass-roots" movement), they can't play the anarchist "black bloc" card and "create new victims" without completely discrediting their legitimate cause (which is actually only a proxy for worker greed). And union worker greed doesn't generate ANY sympathy, on its' own. Catch-22.

prediction: The unions lose this round.... BIG TIME.

You Lefty bloggers best get busy. So far you're BADLY losing the sympathy game.

There's no "meaning" in your religion without sacrifices and victims...

...and an unwillingness to sacrifice ANYTHING in hard times... is seen by the people merely as "bad form".

...and we all know what happens to people who display bad form...

...or hypocritically whine about the bad form of others. ;)

Titan: Black Bloc? Do you have any idea, who you are talking to?

The working class is out in a potential general strike situation, and you talk black bloc.

Have Wisconsin protestors been flying Egyptian flags? I saw one in some footage in a news story about about Wisconsin & figured the graphics guys just ran the wrong clip.

It's good to see solidarity across oceans and continents!

Recent surveys show that 45% of US population view unions positively and 41% negatively. So the statement made by Renegade Eye with regards to unions being more popular than not is correct. And that continues to be true in the face of vicious and continuous attack upon labor unions made by media and the business elite for the past three decades.

They may view "unions" in general slightly more positively than not, but they DON'T view public employee unions favorably. 64% of Americans think that Madison's teachers should stop whining, stop calling in sick, and GO BACK TO WORK!

In Wisconsin there has been several Egypt references by the protesters.

Steeltown: I think you have a typo. Most generally support unions.

Joe C: There is quite a bit of misinformation about public union workers around, like they make more $$ than the private sector.

There is going to be a rebirth of unionism. During the depression they lost membership, than POW in 1934 the CIO is formed, big strikes in Minneapolis, Flint MI, Seattle etc.

I know workers in Wisconsin are angry that Obama hasn't been strongly supporting them, or visited Wisconsin.

Egypt and Wisconsin are yesterday's news.

The revolution is Libya is the real news.

The Arab revolution has finally entered the right path. The anti-socialist path.

Sonia: Saif Gaddafi doesn't even have a position in government, and he speaks for government. Pure Bonapartism, nothing to do with the socialism of Lenin and Trotsky.

No such thing as a socialist country.

The problem with public sector unions is they aren't being paid or employed by the private sector, they are being paid by the taxpayer. They have no right-none, nada, zilch-to make demands on taxpayers to the point they cause states to run deficits. Public employee unions are like a parasite that keeps feeding off its host until there's nothing left.

Labor unions for public sector employees are good for one thing and one thing only, and that is to prevent the lay-off of employees to make room for others based on political patronage. That's their one and only legitimate function. If they don't like what they are paid in the meantime, or aren't satisfied with their benefits, that's too damn bad. Nobody held them at gunpoint and forced them to work for the public sector to begin with.

Indiana's state Democrats just absconded from the Statehouse to avoid losing a vote. The Democrat Party's actual hatred of democracy is getting harder and harder to hide...

I can't wait until Gov. Walker fires all state union members and they rehire from the ranks of Wisconsin's long-term unemployed.

Win-Win for the people of Wisconsin all round.