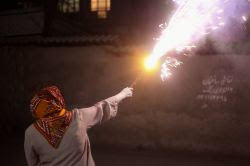 The first day of spring marks the beginning of the Iranian New Year, which is celebrated with bonfires, fireworks and dancing in the streets. This year, however, there was something new in the celebrations. The masses used the celebrations to express openly their hatred of the Islamic regime, in spite of attempt by the police to stop this.

More power to the people. Freedom of expression is a treasured option in most places.

I am not so optimistic about the latest developments in Iran as the author. First of all, yes Iranians are sick of the Islamic regime, especially the young population. However, I am not quite sure what would replace the current regime if they were to either step down or be over-thrown?

There isn't a proper alternative in the country.... I am not saying, getting rid of the current system is a bad idea. On the contrary, it is fantastic. I also hope the same kind of uprising happened in other parts of the Middle East against despotic dictators, or families like Saudi Arabia....

Iranians must be careful that they do not replace the current despots with some other useless political party. After all, Iranians deserve to be government by people who are pro Iran, not necessarily pro West....

I really don’t think it is the “Islamic regime” that many in Iran are sick of per se but rather that a man that probably wasn’t elected is in power.

But I do agree that it seems highly unlikely that this will go anywhere; the real chance for a popular coup was there and has passed.

Nevin: The point of the article, is that the movement lacks leadership and program. The Shah was overthrown, when oil workers joined. The organized working class hasn't yet joined the movement.

Incognito: Thank you for visiting. Agreed.

Sentinel: They lost a good chance last year to overthrow the government. Leadership wasn't there.

A revolution is like pregnancy, and the first month is markedly different than month nine.

What's the chance of a mass conversion of socialists to Islam? Cos that's the only way you'll ever convince Muslims en masse to adopt any thing like socialist societies. By working from within their system. Prepare for the long haul, like maybe two or three hundred years at best.

Pagan: Conversion is a religious term, not a political term.

Under your logic, there would be no contradictions amongst any Muslims. You're saying every single Muslim in the world, should unify behind Iranian mullahs.

All I know is if you think you're going to convince the majority or even a significant minority of Muslims to be socialists you're barking up the wrong tree.

But by all means, carry on.

It's not about the battle of ideas. There comes times, when people leave their daily routine, to play a role in history.