Shays’ Rebellion and the American Revolution 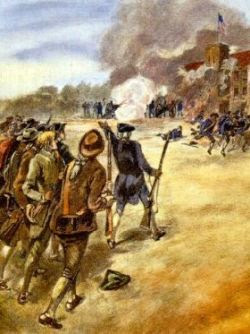 The American Revolution shook up the entire world. The thirteen British colonies that would become the United States of America, fought and won against the most powerful imperial power on the planet. In the years following the American victory over the British, the hopes of the masses were betrayed. As a result, there were many popular movements and uprisings. But none had as big an impact on the psychology of the ruling class and the future structure of the U.S. government as Shays’ Rebellion of 1786-87, which some have called “The American Revolution’s Final Battle.”

John Peterson
Posted by Frank Partisan at 12:09 AM

The tea party "represents" America's working class much more than the AFL/CIO.

The registration fee at the Tea Party Convention was $500.

The Tea Party has been hard to define, since they have no program. White supremacist groups have been using it as a recruiting ground.

well ,the British Empire was always rather good at leaving a vacuum behind its departure.
I guess Its easier to know what your AGAINST than what to put in it's place.A True Revolution never really ends?

I have added your blog in my favorite Blogs list. i would be request a link in your blog roll. because our visitor can get useful information from us.

Thanks again and all the best with your endeavors!

White supremacist groups have been using it as a recruiting ground.

They'd get better results at your blog.

The Tea-Party Convention was a ruse by a handful of people to corral the Tea-Party behind the Republican banner, in my opinion.

Not to say it was all bad. Andrew Breitbart, for example, pretty much encapsulated the spirit of the Tea Party Movement in his remarks about the press, as I see it. At the same time, Sarah Palin's speech entirely missed the mark, unfortunately. The Tea-Party movement has little if anything to do with national defense. For that matter, any truly conservative person would demand cut backs to the defense budget, which has become the largest pork-laden aspect of government there truly is. That's just my opinion, of course, but there it is.

The Tea-Party Convention at any rate was more about a bunch of people meeting to consider how best to tap into Tea-Party discontent, and motivate those people to vote Republican. They have a ways to go to get there. People are tired of their votes and support being taken for granted.

Daniel Shays, by the way, was responsible for the adoption of the Constitution, or more so than anyone else. The individual states were independent to a fault. They even minted their own currency. It's been a few days since I read this article, but I don't remember Peterson mentioning the incident that brought the whole thing to a head. Shays people took over the Massachusetts state armory.

That's when the founding fathers decided they had to build a better governmental structure than what they had, something that was strong and cohesive, something that would hold together. The Bill of Rights was the final piece, the compromise that enabled the Constitution to be signed, and become the law of the land.

No high-blown, airy-fairy ideology, no utopian schemes, just a bunch of smart people getting together and doing what they had to do to make it work. That's the real legacy of Shay's Rebellion. In a roundabout way, it was a success.

Interesting bit of history. I am reading about the Iriqois influence on Franklin and the Constitution

Lawrence: I'll link to your blog later this week. I'll leave a message at your blog when I do.

Tony: A true revolution ends. People tire and consolidate gains. A revolutionary period, is when masses take their destiny into their own hands. Not professional politicians.

FJ: That 50 million number is high. Interesting you say nobody speaks for them. In Minnesota Ventura's party is courting them. They obviously have no program.

White supremacist groups have been using it as a recruiting ground.

They'd get better results at your blog.

This is from the ADL. They disagree with you.

If you think this blog is white supremacist, make this your farewell post.

Pagan: If Shay would have won, with each state an entity to itself, Napoleon would have walked right in. His fight deserves sympathy, but it couldn't beat the modern state.

Troutsky: I hope to have more posts about American history.

They obviously have no program.

They have a program all right, and the government is going to start forming an ever smaller part of it.

The program is as follows-

Federal government-don't call us, we'll call you. You've forgotten a very important fact. You are not the fucking boss. "We The People" are the fucking boss. What are you? Simply put, you are our fucking servants. YOU do what WE fucking tell you to do. You do not "rule" us. You "govern" us. A BIG difference there, because rulers do not "rule" with the consent of the "ruled". They just reign and issue their proclamations from on high. You know, sort of what you have always wanted to do. Well, we're not going to stand for it.

Put another way-You govern us, with our consent. But "We The People" are the rulers. Or, that is as it should be, the way it is supposed to be, and if we have our way about it, that is the way it shall be again.

That's the only "program" we need.

People talk about The Tea Party, and others say The Real Tea Party.

If I was conservative, I would think I'm well served by the GOP. I don't get it it, why they don't want to be part of it? Some are openly GOP.

Thanks Ren. I had not heard of this rebellion before. While not meaning to draw direct parallels it sounds like one of those events like, say the Jack Cade rebellionm that are interesting but did not alter the course of events

It did alter the course of events. Shays Rebellion was a major if not sole reason the US adopted the Constitution. Previously, we were under the Articles of Confederation. So it did have quite an impact.

Jams: I would compare to The Levellers. Both had a good cause, and a hopeless utopian idea.

Pagan: Correct. Shays Rebellion was the final battle of the revolution.

FJ: That is fascinating.

American history is more colorful, than how it's taught in school.

Shays rebellion was like the working class response to the American revolution it was like "hey, you had a revolution and forgot about US? The Working Class??"

LeftyHenry: Shays Rebellion deserves sympathy, but if it would have been victorious possibly Napoleon could have ruled US. Like the Levellers, a hopeless cause.

American history is more colorful, than how it's taught in school.

Ben Franklin erased most of it and substituted a "founding myth" of a noble Cincinnatus named "Washington"...

As the ending of my favorite poem (about King/St. Tammany) goes...

As old age came on, he grew blind, deaf and dumb,
Tho' his sport ‘twere hard to keep from it,
Quite tired of life, bid adieu to his wife,
And blaz' d like the tail of a comit, my brave boys.
What country on earth, then did ever give birth,
To such a magnanimous saint?
His acts far excel all that history tell,
And language too feeble to paint, my brave boys.
Now to finish my song, a full flowing bowl;
I'll quaff' and sing the long day,
And with punch and wine paint my cheeks for my saint,
And hail ev'ry first of Sweet May, my brave boys."

There comes a time (in non-Marxist thought) to "end" and "extinguish" the practices that made "revolution" possible.... hence Adam's "Alien and Sedition" acts.

Did you know that after Aaron Burr killed Alexander Hamilton, he was tried, but acquitted, of TREASON for plotting the overthrow of the government of Louisiana... later to be purchased during the French Revolution?

It's hard to put out the "fire" of revolution, once the match has been lit.

btw - although the 1783 Treaty of Paris ended the Revolutionary War, the Brits continued to arm and fund "Native American" rebellions throughout the continent. It wasn't really until 1814 that the "war" on the frontiers truly ended.

The Brits refused to pose for the painting of the signing of the peace treaty. Paintings were the "official" Anglo-Saxon myth confirming authorities, as these two different paintings of my favorite American "rebel" demonstrate.