This article was written by a Trotskyist from Nepal, about an article a Maoist from Nepal wrote, admitting Maoism is a dead end, and that Maoist cadres in Nepal are interested in the revolutionary ideas of Trotskyism. This post I admit to my readers isn't for everyone. Just like on rightist blogs, some discussions are more for their own group. I disagree with the comrade's conclusion about Maoists and Trotskyists uniting. I believe unity is based totally on common principles. 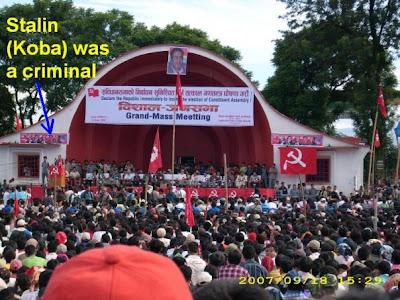 70 Years after the brutal murder of Bolshevik Revolutionary Leader Comrade Leon Trotsky by Koba’s criminal regime (Joseph Stalin), Nepal’s Maoists for the first time have accepted that, in the current context of the globalised capitalism, the revolutionary ideas of Leon Trotsky are “more relevant” than those of his killers (Koba Stalin).

In a recent Maoist Publication “Rato Jhilko” (The Red Spark), Maoist ideologue, Baburam Bhattarai writes: “Today, the globalization of imperialist capitalism has increased many fold as compared to the period of October Revolution. The development of information technology has converted the world into a global village. However, due to unequal and extreme development inherent in capitalist imperialism has created inequality between different nations. In this context, there is still (some) possibility of revolution in a single country similar to the October revolution; however, in order to sustain the revolution, we definitely need a global or at least a regional wave of revolution in a couple of countries. In this context, Marxist revolutionaries should recognize the fact that in the current context, Trotskyism has become more relevant than Stalinism to advance the cause of the proletariat”. (The Red Spark, July 2009, Issue, -1, Page-10, our translation from Nepali language).

So far, Maoists were trying to hide the truth about the life and contribution of comrade Leon Trotsky from their own cadres. But after our intervention on this issue through the internet, it seems that, Nepali Maoists could not hide the truth about comrade Trotsky any more. As the 14 year old Maoist campaign in Nepal based on Stalinism and Maoism is heading to a dead end, and as the party cadres are demanding explanation from the Leaders, the latter have been forced to speak the truth about Bolshevik Revolution in general and about comrade Leon Trotsky in particular.

This recognition is also an indication of the fact that, Maoists are trying to draw a balance sheet of their decades long campaign, and have come to face the truth about the fallacy of Stalinism and Maoism.

We appreciate this positive first step of Nepali Maoists to embrace the truth, and urge them to educate their cadres about the life and work of comrade Leon Trotsky and his teaching on “permanent revolution”.

We also urge the Maoist leadership to take immediate steps to bring the Maoists and Trotskyists from different nations together in order to establish a global nucleus of revolutionary forces to fight imperialism more effectively.

Interesting. Could this be the beginning of a new left unity?

Now, if only the Trotskyists can learn to get along with one another.

Do you have a link for this article?

very interesting ... there were a number of groups and orgs from maoist backgrounds which developed towards a revolutionary marxist program (e.g. RPM-M in the Philippines or the former "Frontistes" in Morocco) or which rejected at least some of the stalinist stuff (CPI(ML) Liberation in India which e.g. critizises the popular front policy of the Indian CPs)

It has always been this division that has limited progress.Internal Stresses create a weakness.Debate=Growth methinks?

This is a remarkable admission, considering where it is coming from.

I'll reply tonight to comments. It is a good discussion.

I don't know where to find the link, or if it's in English. I think Marxist.com might soon have an article on this subject.

Spanish Prisoner: In the US the Trotskyists had splits, because the leader of the SWP, lacked theoretical foundation. James Cannon was a good organizer, but not equipted to deal ideological struggle. The whole communist international learned wrong methods from Zinoviev, who was a pragmatist.

Larry G: Great you're back.

JohnB: I doubt if the link is in English.

Entdinglichung: The Naxalites are what are called third period Stalinists. They represent Stalin's ultraleft phase that destroyed things in Germany. I'm interested in knowing about those groups.