I have asked my friends Aaron and Nadia, who recently moved to Vietnam to teach English, to send this blog regular reports. 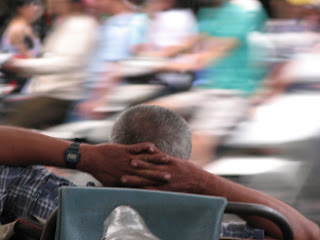 Occasionally, in Ho Chi Minh City, Saigon, behind the smiles and food, I get this feeling of some sort of cultural train wreck. It is like everything we know we hate in America, the things we are trying to change, are formulating in Saigon and in a more glamorized form.

I think I first realized it while riding up an escalator in a western-style but Vietnamese catered MegaPlex of Gucci, Bebe, Ralph Loren, and “elite” and very expensive fast food restaurants with imported French fries, homemade food, real cutlery, and waitresses opening the doors and bussing the tables. In every aisle and on every floor, there were LCD TVs playing music videos from the 80’s and 90’s, and on the loud speaker the Happy Birthday song played repeatedly, sometimes even instrumentally and multi-lingually, urging shoppers that “this day is your day, it’s your birthday.” I didn’t know what the hell was going on.

Outside the MegaPlex, beyond a row of thatch shacks, and on the other side of a group of land mine and Polio and Agent-Orange afflicted beggars, they sell some French baguettes—apparently the French left colonial houses and baguettes, the Americans left phantom limbs, unexploded ordinances, and birth defects. They also sell, believe it or not, some American flag do-rags and “United We Stand” T-shirts. Though there is a teenage MTV-inspired western craze—and 60% of the population is under 25—I don’t think that the Vietnamese market demand is just yearning for a “United We Stand” shirt. The shirts are cheap and surplus, factory leftovers. So that poor teen with dirt smudges on his face doesn’t really love America, he just bought a cheap shirt.

Though, a sort of western craze, or rather a craving for “development,” is apparent and perhaps bubbles over. Walking the streets in the quiet, wealthier, Catholic area where I live, I feel like a Celebrity. Being one of the few westerners, everyone stares, little kids and some adults alike yell “hello,” after which I reply with another “hello” which they follow again with “hello,” and it continues for some time. The elderly, understandably, aren’t as excited to see me. I can completely understand why.

Ho Chi Minh City, I'm told, is by no means Vietnam. It’s closer to a Vietnamese Los Angeles. After a month, I couldn’t help but get the feeling that I needed someplace different. Someplace more, well, Vietnamese. I have been shocked at the safety. I’ve felt safer living in this city of 8 million than I have living in Fargo, close to the campus Frat Houses (though I had some reason for alarm). The people are more than friendly, and the one-party Communist government surprisingly puts forth more diverse candidates than two parties in a certain republic. I am curious to travel north.

I can only imagine what it would be like to be there, but your descriptions, Aaron are very intriguing and descriptive. How wonderful to explore new borders and boundaries. I hope you do get up to the north and please write more of your impressions. How do they manage to keep the city so safe?

How wonderful to get a first-hand report. Thanks.

So that poor teen with dirt smudges on his face doesn’t really love America, he just bought a cheap shirt.

It is just as likely that he would prefer to be in America with its far superior economic system and standard of living. With a little ambition and hard work, he would be able to clean the smudges from his face and afford to buy an "I love Vietnam" sweatshirt.

I don’t think ambition or hard work is lacking here at all. On the contrary, hard work is a thing of honor. Many work more than twelve hours, have little to no vacations, and value education. Students will walk 2 hours just to take an extra class that they feel will better themselves and their family.

The funny irony is that it isn’t hard work holding people back, it’s the compounded efforts of recovering from hundreds of years of war (of which the latest fire-bombed and deforested), the push toward being more "American"(liberalization of the economy and getting rid of education and health care for all), and multinationals, which sweatshop patriotism surpluses exploded and landed on that poor teens back.

We were confused here too. There is petty crime and some organized crime in one district between Cambodian and Chinese gangs. But, for the most part, one can walk anywhere in city at any time. Machoism is nonexistent (as are cat calls), and girls in miniskirts driving scooters doesn't cause a traffic jam, its fashion.

Do you eat pho daily?

Was there electoral activity?

I felt that Vietnam was very safe, particularly given the level of poverty in the country.

But I wonder if a point of comparison for Vietnam is not the US, but China. My understanding is that the Vietnamese are rapidly industrialising, and hoping to have a primarily industrial economy by the year 2020. Extreme poverty has decreased in recent years, and the country is miles ahead of some of its neighbours. However, Vietnam is arguably a long way from being a Western style liberal democracy.

Ren: off topic but you must have predictive powers, I'm having a small tattoo today which hopefully will not destory my acting career!

Ren, thanks.
Not quite daily. The electoral activity that is buzzing is that of the US elections. I can't get away from silly speeches. (But not so much is heard about McCain, people are still mourning over Hillary's loss. And it's funny, because bill visited they have his book translated into Vietnamese...even in supermarkets. I hope its a better read than it is in English)

I did'nt mean to suggest that Vietnamese people are not hard working or ambitious. I only meant that it would be much easier to improve their living standards here in the US than in Vietnam.

Thr,
I think your right, China is a better comparison. But due to a thousand year history and a sort of "Asian Status" that views the Chinese(and Japanese and Koreans) on top, everyone I've talked to says they hate the Chinese, but they "like" Americans. Because I'm American and because of the western memorabilia and allure, the assumption was made.

The poverty decrease goes back to the GDP argument and how wealth and self-sufficient societies are measured. Right now is interesting, as they jump into industry. Vietnam even will be importing pork soon. Yay.

I think a lot of immigrants would agree with you. But it is a good question, and it may be hard to say. By 2020, so the papers say and Thr pointed out, Vietnam will be the place to be. I think the average citizen will have trouble paying for imported staples, but that's nothing new for the US. I often think what the US will be like in 20 years.

Aaron, I'm impressed. Where else in the world can women walk the streets and NOT be harassed? Amazing. How is the air quality? I have friends from China and they are always complaining about air pollution when they go home. I have always dreamed of visiting Angor Wat in nearby Cambodia.

The air quality in HCMC isn't good. Smog masks are common, hello kitty prints and all. The streets weren't designed for all of the scooters much less the cars. But, traveling outside, it gets much better.

As soon as we get the visa, we'd love to visit Cambodia also.

What is the situation with the arts; TV, movies, theater, galleries etc?

Are coffeeshops there? French coffee?

Hello Kitty smogmasks!! I love it. I have heard of the magical power of healing that the hello kittycults promote. :)

Thanks so much for thus very interesting first hand account if present day Vietnam. I'm looking forward very much to the next ones.

As far as getting ahead in this country, it's a lot harder than it used to be, with the inflation of the costs of everything, the continuing devaluation of the dollar and the shrinking job market. In any case our banks have moved to China and the Middle East, and our infrastructure has been bought by China, the Middle East and the Europeans. We been colonialized by our corporate masters, reamed out, and left to twist in the (pollution carrying) winds ....

However, it is expected that the white majority will become another minority here by the next generation. These are interesting times for the U.S.A.

French coffee and Vietnamese French (arguably different, but I can't tell) Coffee is common, as well as pastries.

Movies are imported and often dubbed by one Vietnamese lady for all voices. In short, the movie theatres aren't packed.

When it comes to the arts, there are traditional dances, water puppetry and everything kind of left, frozen almost, from the Chinese rule. There also are a bunch of mainstream paintings, oil painted replicas--some even of celebrities (we even saw one of Mary Kate and Ashley, who knew?). Even the beautiful independent painters painting Vietnamese scenes are arguably "western" in that oil painting just isn't tradition. The art, I think, is in the glazing, sculpture, and pottery that is traditional and adapted. But everything--a fan, umbrella, or even a scooter, may have art upon it. One can find everything made by hand and made by families...but the factories are increasing.

Music is kind of locked in a techno, pop, retro, nostalgia. If you ask children who their favorite singer is, they'll say Celine Dion or New Kids on the Block. It's weird. But like everywhere, one has to hang around the locals enough to scratch the underground surface of submerged, better music.

I heard that majority minority.
Also, I read that Texas is allowing guns into school. Interesting times indeed.

Hey Aaron. That was a great report and also interesting further discussions on the comments.

And it is great to hear about you and Nadia again here. All the best.