The Anatomy of Christopher Hitchens 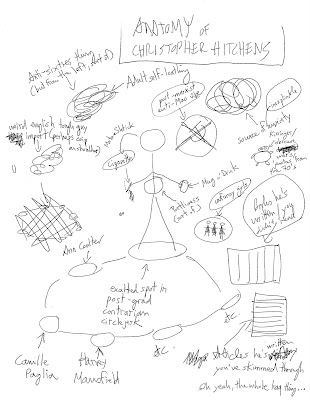 "Anti-sixties thing (but from the left, sort of)" Lol!

I can think of one important thing in favour of Christopher Hitchens - he's not his brother Peter.

LOL that was good.
Sorry guys, I've been away lately, caught again in the middle of moving to Houston area, but it does not mean I ignore yall, yar in my thoughts. Gee I'm starting talking like a Texan now.

PS: anyone who read the book "Dark Ages in America" from Morris Berman?

It left out the most obvious and annoying part of his anatomy-the mouth that can never stop interrupting.

Lay off Hitchens. He is the smartest political commentator alive. A perfect antidote to Chomsky's poison.

Sonia: Actually Hitchens was one of Chomsky's biggest, most eloquent defenders. He does defend his view on Cambodia, Vietnam and anti-Semitism.

Both Chomsky and Hitchens are hot and cold. Sometimes brilliant and other times idiots.

Interesting using a word like poison, and not saying what you mean. We both know Hitchens believes the military should be used as a force to enforce secularism. Funny he could be so knave, about imperialism. His hatred of religion rises to poison. Marx said religion is the heart of the heartless, and the soul of the souless.

As you know, from the early days of this blog, i was knave myself. I'm not Hitchens.

I don't know how Chomsky could be mentioned in the same breath as Hitchens. Chomsky, despite whatever flaws he may have, never made so grotesque and inglorious a descent to shilldom as did the late Mr Hitchens. To this day, he seems more a Frankenstein-esque creation than a man. On the one hand, we have his early work, aimed at Kissinger and those who oppress the Palestinian. Now, we have his assurances that the women of the Middle East are best liberated by tyranny by way of shock and awe campaigns.
Perhaps alcohol destroyed any capacity he might have had for coherent though. It still would not explain his eagerness to play the stooge.

Religion, especially the fundamentalist variety, pisses Hitchens off, so it is easy to see how he would evolve to a state of mind that says Muslim women should be liberated by force and that the military should "enforce secularism".

There aren't many people that will spend a lot of time writing diatribes against Mother Theresa, so that should tell you something.

Those two are the Martin and lewis of the 'God is as good as money in the bank' tour. Hilarious.

Who can forget the D’Souza & Hitchens “Is Christianity the Problem?” performances? Hitchens was the plump, slightly drunk, affiable straight man (definetly not reference to his sexuallity) to D’Souza's lovable scamp of a goofball.

Hitchen's is a lefty who is for the war in Iraq. He's a George W. Bush with brains. Like a Hillary Rodham Clinton but a little more to the left and w/o the boobs.

Yeah! He's got a big mouth, unlike O'Reilly, Limbaugh, and Beck who get their points across without being absurd jack asses.

much enjoyed as always, thanks

Fantastic. Made me laugh.