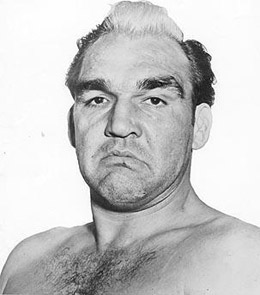 The wrestling legend who was born with the name Rocco Monroe DiGrazio, died on Friday in a Florida nursing home at 78 years old. He had been ill several years, including having half of his lungs removed. His father by blood died in an airplane crash before he was born. His mother remarried, and at 17 years old, he became Rock Monroe Brumbaugh.

His first wrestling name was Pretty Boy Roque, when he started grappling in 1945. His first gimmick was using the name Elvis Rock Monroe. If you say it fast it is Elvis Rock-N-Roll.

Once on the way to a booking, he picked up an Afro-American hitchhiker, and brought him to the arena, where he was wrestling. He was walking arm and arm with him. A racist fan saw that, and called him names. The wrestler kissed the Afro-American hitchiker on the lips. The worse thing she could call him was Sputnik. It was the time the Russians sent Sputnik into space. The promoter kept the Sputnik name, for cold war heat reasons.

It was wrestling in 1957 Memphis, Tennessee where he made history. Until the late 1960s, professional wrestling in the southern USA, was segregated. Afro-Americans only wrestled others. The Afro-American fans sat in the bleachers. According to National Public Radio "Sputnik wasn't about to change anything about himself but his name. He continued to build friendships within the black community, and soon had a huge following. He was a heel, or a bad guy in wrestling parlance, but to his fans, he was a hero. Walking into the ring at Ellis Auditorium in downtown Memphis, he would be booed by many whites, but as soon as they were finished, Sputnik would turn to the top seats, the segregated top balcony, raise his arms, and bring down a groundswell of cheers. Sputnik wanted more of his fans to get into the auditorum, so he bribed a door attendant to miscount the number of African Americans admitted. Soon, there was no place else to sit but in the white section. Whether fans were black or white, promoters could see nothing but green, and with little fanfare, seating at Ellis Auditorium was integrated. Later, he tag-teamed with an African American, Norvell Austin. Many fans said it was the first time they ever saw a black wrestler in the ring."

His 1959 feud with Billy Wicks, set attendance records in Memphis that were never broken until recently.

His work against segregation was honored by the Memphis Rock and Soul Museum. They have one of his ring outfits on display.

Sputnik was an authentic tough guy who boxed, wrestled in carnivals and in arenas. He had his last match at near 70 years old. He never left an opponent feeling better after a match with him. He made Memphis better.

Addendum: In the 1960s on television was a western called "Bat Masterson", starring Gene Barry. He was a gambler, and outlaw fighter who wore a derby and carried a cane and a Derringer pistol. Sputnik was in attendance, when the actor was doing a personal appearance. The wrestler took the cane, and broke it.

See: Sputnik Monroe on NPR
RENEGADE EYE
Posted by Frank Partisan at 12:30 AM

Nice article. I had no idea who he was.

What a story! I had never heard of him either. Great post Ren.

Great post, great story, great man. He should get the recognition he deserves, hopefully one day he will be known outside Memphis. I wonder what the Gene Barry story was all about, though. Was it based on dislike of Barry, was it just a promotional gimmick, and was Barry in on it? Maybe we'll never know.

Sputnik didn't like it, when others got more attention than him. That is why he pulled that stunt with Gene Barry.

Great human story in a world of so many inhuman stories! Thanks. I learned something.
Dahlia

And thanks for all your great comments on Just Dahlia!

I never heard of him either... but he sounds like he was one great guy.
Thanks Renegade!

I never heard of Sputnik and I grew up in Memphis.

Thanks so much for this wonderful story.

wow ren. Like so many others I had never heard of him

WHAT A MAN POPPA ROCK.,LITTLE DID I REALIZE WHAT A LEGEND HE WAS, IS AND ALWAYS WILL BE IN WRESTLING. READING ALL THE STORIES ABOUT HIM, I'M GLAD I HAD THE HONOR OF MEETING HIM. MY HEART IS SADDENED BY HIS DEATH AND MY LOVE TO NATALIE AND BUBBA/ LOVE YOU POPPA ROCK AND WILL MISS YOU. NIBBLER

we will miss you tremendosly popa rock, and i will keep you alive in halee's heart and mind. she is 8 so she's not to young to forget you....
shelly and halee

51 yrs. old now I can remember as a kid my dad taken us to watch the matches in the early 60's and I can still hear "Sputnik The Sweetman Monre" R.I.P.

I grew up with Bubba and Nat in Louisiana.I had the privilege to both know him first, as a teenager and later, train with him in the ring. The world lost one of the greatest "heels" in the business when we lost Sputsy. It's been a year and we miss him still. He was one of the funniest guys ever, and at the same time he was one of the toughest SOB's on the face of the earth! He gave me a chance to live my dream in the ring. But he didn't cut me any slack because I was female. He made me train with men in the ring to "toughen me up" so when I went out to make my "masked debut" I wouldn't take a bump like a "sissy". Thanks Sputsy, you'll live forever in my memories! "The Masked Enforcer"

I remember watching him on tv. As he used to say "the heavenly body from outer space - the body that men feared and women loved".

Truly an American one of a kind.