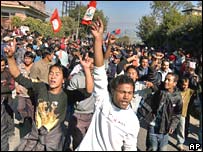 The last three months in Nepal have presented the deepest political crisis in the last decade in Nepal. In last two weeks, a general strike has paralyzed the country, and signal the monarchy is on the verge of being destroyed. China provides luke warm support to the monarchy, otherwise it's isolated. It is on its last days.

The mass movement is led by a coalition of the Nepalese congress, a seven party coalition called the Seven Parties Alliance, and Maoist insurgents who control about 60% of the countryside. All segments of society including judges, lawyers, trade unions, peasants etc have come out against the monarchy. The general strike is open ended, will go on until the monarchy is gone. No going back to the status quo.

The Maoists have been involved in the last several years in skirmishes against the army, known to be barbaric. They recently called for a cease fire to expose the inflexibility of the monarchy. This tactic increased the Maoist's support. The Maoist's support the program of the Seven Party Alliance's call for non violent change, and new parliament to form a new government.

The question is how will the pro-bourgeois elements of the movement maneuver? The Maoists must go beyond calling for the king to step down. Their base is rural, while the movement against the king is urban. Maoists in the trade unions, generally neglect worker's issues, and organize them to support country side struggles. What is needed is an urban/rural alliance to overthrow the feudal system. The Maoists are content to build a parliamentary government, than in the late, late future establish socialism.

The general strike movement is far reaching, and moves faster than its leadership. The rulers of India, Pakistan and US, call on the king to step down. The Maoists will be integrated into a parliamentary system. They seem satisfied with that.

Nepal alone can't establish socialism. It would have allies with workers and peasants in India, Pakistan and Tibet.
RENEGADE EYE
Posted by Frank Partisan at 11:43 PM

You're right. Monarchism is dead. But the king is alive and I suspect that most Nepalese would not want the Maoists in power. My understanding is that the movement is led by university students and the demand for a bourgeois democracy is what the majority of them and the people of Nepal actually want.

BTW, Fidel Castro sent his envoy to Nepal the other day to express his government's support for the King.

It will be interesting to see what happens in Nepal. I'm not a fan of Maoism myself, but I also would like to see the king deposed.

Choosing between the monarchy and the Nepalese Maoists who are considered to be a terrorist organization cited for conscription at gunpoint and employing "child" soldiers, there should not be too much debate over the lesser of the two evils.

That Castro, he sure knows how to screw with my head...

I am hoping for the last one. At least people won't be slaughtered on the knees, but in a fair fight...

Sonia: You left out parlimentary democracy, something like they had before. I doubt if Maoists will go any farther than demand the king step down.

The spontaneous mass movement isn't really controlled by the Maoists or the Seven Party Alliance. That makes this exciting.

Agreed. But a Maoist majority and parlimentary democracy?

Renegade put his finger on it. "The Nepalese can't establish socialism by themselves". and that's the point.

There is no international socialist movement anymore. Things have changed. The left, as it was, has gone, apart from a few parties in thr developing world...and George Galloway.

The Nepalese should, and will, chuck the king out and establish a republic.

The Maoists have gained extraorindary support from the majority of Nepal. Not necessarilly the cities (yet) but the countryside. The Maoists already control 80% of the country!
The King is doomed, socialism is alive!

If you're right, then they won't deserve the proud name of 'Maoists'. Unless they slaughter at least one third of the country's population, they will be automatically downgraded to 'Stalinists'. And if they don't even fullfil a '20% slaughtered' quota, then we will only be able to call them 'garden-variety commies'...

the spontaneous mass movement isn't really controlled by the Maoists

The Bolsheviks didn't control the 'spontaneous mass movement' during Russia's February 1917 revolution neither. That's why they needed the Cheka firing squads to slaughter anyone brave enough to contradict them...

Fidel never ceases to confuse me.

Today the Maoists announced a ceasefire.

I supported the Vietnamese, when they whipped the Khmer Rouge. I don't know what the KR were, I know they were not communists.

I don't take well to the Shining Path in Peru. It is personal. They bombed a pizza parlor I frequented in Lima. I missed the bomb by a week.

The ironic thing is when India stopped supplying arms to Nepal because King removed democracy and started a war on Maoists, China took over that role and supplied arms to King, againsts Maoists. Glad to know democracy is back.

Have you noticed the lack in the media coverage of the words 'people power'?

They think that the 'orange revolution' in Ukraine was people power (which it most definatly was not) but the one time when there is a genuine people's movement to get rid of unelected the has-been monarchy and commentators and western politicians get nervous. Instead they call it the 'Nepalese crisis'...or some such.

They don't actually like people power at all - they are much more comfortable with elites in Eastern Europe fighting over the spoils.

It seems the Maoists are content to be part of the government. After years in the government, some of the Maoists, will look back at old days, and think about the times, they played being socialist. "I used to carry a Red Book."

Nah. Not after years. A dangerous elite has already been created, with religion (in Mao we trust, you trust in the party, etc) et all. So it goes, sadly. There's the rub.

Every once in a while (actually more often than that) we get an appeal from workers which makes you sit up and really take notice. The hunger strike now taking place at the University of Miami, in the United States, is one of those times.

It's all over the front page of LabourStart and has been for the last two weeks. But it was the videos (now showing on http://www.labourstart.tv ) that really did it for me.

Janitors, housekeepers and groundkeepers at the university have been demanding what is a simple, basic human right -- the right to join a union. Their employer is threatening them and intimidating them, and the university is refusing to lift a hand to support them in their struggle.

They are demanding that former Clinton administration official Donna Shalala, who is president of the university, intervene in the dispute and tell the company (called UNICCO) to recognize these workers' right to form a union. Shalala is stubbornly refusing.

They have gone on a liquids-only hunger strike -- both the workers and a half dozen university students. Civil rights leaders, politicians and labour leaders have rallied to their cause. The workers are laying their very lives on the line for dignity at work. Already, several have been hospitalized.

They are asking us to do two very simple things:

-- and send off your message to Donna Shalala.

2. Forward on this email to everyone you know, especially students and others at universities. Publish it on your blogs and websites. Print it out and hang it on bulletin boards. Reproduce it in your newsletters.

Help us mobilize thousands, and then tens of thousands, to overwhelm Donna Shalala with emails of protest in the next few hours and days.

These workers must not feel that they are alone. They have the support of the entire international labour movement behind them. Let us show them that today, right now.

The King dismissed parliament and took State power ostensibly to prevent the Maoists from overtaking the political process. The people in the streets are demanding that the King hand over power again to the elected parliament. And the Maoists (contrary to doctrine) are agreeing to participate in restoring bourgeois democracy. They, btw, have gained more support in the countryside while the Kind has been fiddling with the State.

And, of course, there's another Communist Party (UML) there fooling around. UML? United Marxist-Leninist.

It would be an advance, if the people of Nepal could live in a bourgeois democracy. That's what most of them want, but of course, it will be tempered with a lot of contentious forces with not so public agendas of their own. Hey..that's politics in class society.

Hiya
Greetings on the 40th anniversary of the start of the cultural revolution in China. I am watching to see what commemorations there are in Nepal... I've been watching a while, since being there in mid 90s when the UML won power. Since then just occasional visits, but I tried to write on the recent events for a Canadian magazine called Orange Life (out about now) - part of which you can find here: http://hutnyk.blogspot.com/2006/04/revolutionary-tourism.html

The King looks likely to last not so long, and will be lucky to hang onto his life. The kind of state the Maoists manage to construct (some worry tis a forced labour regime, others are more optimistic) will depend upon neighbours, as you say. Even geographically Nepal is squashed between India and China - and so we have the Himalayas - and that's a plausible metaphor for thinking of the political prospects also.
Lal salaam - John