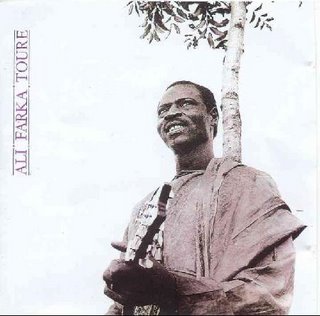 His name may be known for a grammy winning album with Ry Cooder called Talking Timbuktu. He could have recorded in any location he desired; New York, Paris, London etc. He recorded his guitar work, that gave him the title of the "Johnny Lee Hooker of Africa", in Mali. The recording equiptment was sometimes primitive, compared to what could be found in Los Angeles or New York.

When he played guitar, he got sounds out of it like you never heard before. You were transported to his village.

There is a theory, that American blues, was influenced by Muslim slaves in West Africa. An example is the "Muslim Call To Prayer" compared to "Levee Camp Holler". That theory is strengthened by his music.

Touré used his money to better his people in the town of Niafunké, where he was mayor. He also helped young African musicians succeed.

Kudos to Musings of a (Fairly) Young Contrarian.RENEGADE EYE
Posted by Frank Partisan at 2:40 AM

It seems you have watched the DVD titled " A visit to Ali farka Toure".

Toure Ali Farka has been an inspiration . Along with the late Fela kuti he has shown how to be dignified and true to your calling in an increasingly precarious world.

Inredible musician. They play his videos on World Link TV all the time.

Renegade, thanks so much for this post on the great Ali Farka Toure. I'd like to link this to my blog, if I may.
mw