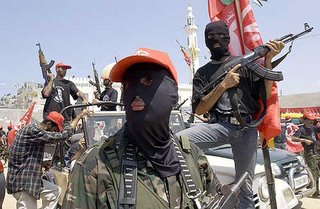 Christopher Hitchens in the January 30 2006 issue of Slate, wrote an analysis of the Hamas win in the Palestinian Authority election.

Hitchens wrote: "Almost all our commentary on the Israel-Palestine dispute is unconsciously ethnocentric and practically every paragraph on the Hamas election victory has followed this bias by asking what it means either for the Israelis or for the "peace process." It might be worth just thinking about what it could mean for the Palestinians.

The preferred analysis, which certainly derives from a kernel of fact, is that the vote represents a repudiation of the baroque corruption of the Arafat gang (which was so brilliantly anatomized by David Samuels in the Atlantic of September 2005). But there are at least two difficulties with this comforting conclusion. For one thing, anyone voting for a clerical party in the hope of abolishing corruption is asking to be considered a fool and also treated as one: There is corruption all over the Middle East, but it is nowhere as flagrant and exploitative and damaging as in the region's two main theocracies, Iran and Saudi Arabia. Those who come to power as puritans lose no time in becoming positively gorgeous in the excess of their corruption, and Hamas will not be an exception to this rule.

There is also an element of condescension in the "corruption" explanation. Hamas says that it wants an Islamic state all the way from the Jordan to the Mediterranean. It publishes and promulgates the Protocols of the Elders of Zion. Why not assume that it is at least partly serious about all this? For years, the PLO leadership has been at least officially committed to a two-state solution and has at least officially made a distinction between Judaism and Zionism. It has also renounced the disgusting tactic of suicide murder. The emergence of a party that considers all of these evolutions as betrayals may have to do with something more than the provision of welfare. I am uncomfortably reminded of the tripe talked by many liberals and leftists about the Khomeini revolution in Iran in 1979, where it was said that religion was merely the form that protest against the corrupt and repressive shah happened to take, and that the mullahs could be contained."

There was a time when Fatah was a working part of the left. I remember during the 1970s, leaders of Fatah's Central Command, met with American leftists, often privately, explaining their positions, and soliciting political support. I know this because I was at such a meeting. Fatah always differentiated Zionism from Judaism.

I think you should read the article Hitchens on Hamas. It is a good starting point for a discussion of the issues facing that part of the world. I found this article generally thought positively on rightist blogs. I think the message is for the left.

Hitchens was invited as a speaker at a GOP Zionist conclave, that was cancelled. The Zionists were opposed to Hitchens speaking there.
Posted by Frank Partisan at 12:29 AM

The language of Christopher Hitchens's article is way too strong. I dont think Hamas will prove any different from PLO.

I don't agree with the article at all. The min thing is that Hamas was democratically elected by the Palestinian people. This is a fact that has to be recognised and accepted by the rest of the world, Israel and the USA in particular. Obviously the people here were not satisfied with Fatah, the corruption, the lack of leadership, etc.
Hamas has to be given a chance to prove themselves different or better.
Only through acceptance will a lasting peace be possible in Israel/Palestine... and only then will we see the creation of a Palestinian State.

Hard to disagree with Hitchen's article or depth of knowledge.

I suspect Hamas will maintain an official face that is sufficiently "moderate" to receive aid money from the West.

Meanwhile its bombers might develop a "new" Palestinian terrorist organisation that is "separate" enough for the Hamas government to deny any links or control over it.

I don't know that Hitchens is so much making a point as he is lamenting the observance of tragic events. The struggle among the children of the sons of Abraham it seems will never end. They have allowed themselves to become involved in a proxy war between the U.S. and Iran (non Arab Persian theocrats).

While Israel has had its share of misteps, they officially recognize Palestine's right to establish and maintain a state. Israel publishes and propogates no equivalent to the "Protocols" and Israel makes no distinction between Palestine and Islam as if seperating the two would prove no religious animus (as is the feeble attempt by those who say they oppose Zionism not Judaism - not the place to explain here).

As a parent, teaching my children responsibility, I've had to allow them to suffer poor decisions they've made to understand that with responsibility comes accountability. So too, must the Palestinian people.

I just can't help but think of the IRA.

I had the thought, it's a game of chicken. Israeli leaders, with a superior military capacity, would love an excuse, for an open incursion.

Hitchens left open how to deal with Hamas in power. They won the election, they have to be responded to.

You covered some great topics in your blog. I enjoyed reading it.

A few points to remember about Hitchens.

He believes that in certain cases US imperialism can be used for good purposes such as installing democracy, stopping genocide etc. These instances are getting more frequent for him, I believe, as his politics continues to degenerate towards that of a total apologist for imperialism. He rarely criticizes the historical role of the great powers in starting the conflicts that the latter galantly step in to stop.

Second while playing up the "ancient" or "moribund" nature of the Islamist states (Iran, understandable but Syria more questionable) and their uses of Islam to motivate the masses, he misses the opportunity, on purpose I believe, to point out that these states and their ruling capitalists use Islam as a way to rule. In effect Hitchens begins to don the robes of Samuel Huntington and argues for a clash of civilizations, values, religions, etc. between east and west. A real leftist would point out a clash of capitalisms, competing for global or at least regional hegemony. Neither in the interests of the masses, east or west.

Thanks for the venue.

Hi,
your blog covers a wide range of topics. Thers's a lot to read. Will visit you more often in future.

Btw, please enable comments for non-blogspot visitors too; because I'm going to be one of them soon :-D

"Hitchens was invited as a speaker at a GOP Zionist conclave..."

Don't worry, Chris, you'll be invited back. Just keep it up. There'll be plenty of wet "fanfare" to make up for what you missed. Keep playing to the zealots who can provide you with the finest fanfare.

Edie, I changed the template. Sorry about selling out to post-modernism.

Hmm? I don't see you selling out to postmodernism by changing your template! I continually agonize over the 6-9 intensity of green in the hexadecimal on my background, which is much more crawdead-mud grey this week than last. Who cares?

Maybe Hitchens would accuse me of being disrespectful or even racist for this, but I refuse to accept as legitimate any coverage of an extremely impoverished and suppressed place that does not point some of this out: unemployment, poor infrastructure, malnutrition, water shortage, premature death rates, etc. He does not, and his omission abets imperialism.

From the article: "The opposition party was already better organized than, and had almost as many guns as, the nominal Palestinian 'government.' It has a host of unemployed and semi-educated and well-armed young men, who will no doubt relish the task of bullying women and 'unofficially' collecting the al-Jeziya revenues. Critics of the 'road map' correctly pointed to the enclosure of Palestinians in ghettolike enclaves and Bantustans. Wait until you see what life looks like in a hermetic society, cut off by the Wall whose permanence this election almost certainly guarantees and subjected to Islamic rule."

That is not analysis. It is the opposite, seeking to obscure the origins of the wall and the rise of Hamas to power and blame the Palestinian people for their current and future suffering.

I think you should ditch Hitchens at the fork in the road. He's a tool.

This is a better format than the dark format.

Hey new look is far better, It's reader friendly. Lighter backgound suits your site better because you have lot of text to read.

Having long ago given up on Hitchens, I, nevertheless, decided to give his piece a read. I knew full well it would be essentially reactionary. Eminently "shallow" and "short-term", as substantive as need be until he needs another invite. Chris is regularly invited to such gatherings as the aforementioned "conclave". He is become.

Wittingly or not, as Edie put it, Christopher Hitchens is a real Tool.

An iconoclast? Yes. And that's valuable -- as far as it goes. But, surely he's not in the deep end. In the end he is just very suspect.

See, I read in a bit, and it wasn't before long Hitchens betrayed himself.

"...the disgusting tactic of suicide murder."

One of the last things you might possibly call suicide-murder is "disgusting". Unless, of course, you were playing a simple push-button game. Chris is.

Sad, desperate, misguided, wounded, harrowed, abused... these words come to mind long before "disgusting". What's truly "disgusting" is that so many are so sad, so desperate, so misguided, so wounded, so harrowed, and so abused, to the point insanity, that they feel they have nothing left to them.

His thoughtlessness is a perfect "starting point" for "rightist blogs". That's why it's taken up there.

"As a parent, teaching my children responsibility, I've had to allow them to suffer poor decisions they've made to understand that with responsibility comes accountability. So too, must the Palestinian people."

Can I just say, I've never seen anything so eye-poppingly racist on a lefty blog. Quite in keeping, I think, with Christopher Hitchen's apostasy. No-one's being that insightful, pointing out Hitchen's status as drummer boy for imperialism. What is less touched upon is his frothing racism. Here's a fine example:

As for Hamas I can't help thinking of all those argument's about democracy being warped by imperialism. You couldn't get a clearer example than this.