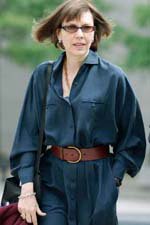 Judy Plame Not Joan of Arc.

Phillip Agee, a retired CIA agent, developed a conscience. It was after the reality of the CIA's half-century-plus run through our world has been quite another matter though: the formation and funding of secret armies and death squads from Laos and El Salvador to Afghanistan; the corruption of democratic political parties; the assassination, or attempted assassination, of leaders of other countries; the investment of billions of U.S. taxpayer dollars in torture research, and then the teaching of new methods of torture (as well as time-tested ones) to allied police and military forces globally; the running of torture centers and secret prisons abroad; and the overthrow of democratically-elected governments from Guatemala and Chile to Iran. Through all these years, CIA agents have acted with impunity. The intricate tale of CIA "covert" operations is quite a grim little history, drenched in blood and pain -- and a history that finally blew back on Americans.

In 1975 Phillip Agee wrote the book "Inside the Company:CIA Diary". It revealed what the CIA was doing, particularly in Latin America. The book named all the spooks Agee knew. Agee was in the company for 12 years. He started as an idealist, and later became angry about covert activities, against justice. Welch was not mentioned in the book. His former comrades were angry, and felt betrayed.

In 1982 the congress under former CIA George Bush41 and Ronald Reagan, passed the Intelligence Identities Protection Act. That law was written in response to the 1975 killing of Greek division head Richard Welch. It was the anti-Philip Agee law. He was blamed for outing Welch, even though he didn't.

Now the phony leftists are singing the praises of Intelligence Identities Protection Act. Some even want to strengthen it. The law was written against the left. Now all of a sudden, the CIA is your friend. Progressives have to stop the CIA and people like Valerie Plame; blowing the cover of her fellow agents when they are found engaging in kidnappings, torture, or attempts to overthrow democratically elected governments.

Don't rejoice about seeing Libby or Rove against the wall. Granted Rove in particular, will use any tactic; be careful of who you think your friends are.
Posted by Frank Partisan at 8:09 PM

Thank you very much for visiting my blog.

I had a recent conversation with a person who lives in Russia. He studied there during Soviet times. I was astonished by the lies in
state-sponsered education over there, especially those against Stalin. I will upload the discussion on my blog soon.

I would suggest you to read "Another View of Stalin" by Ludo Martins. An online copy of the book is available free at http://www.plp.org/books/Stalin/book.html.

You are also invited to join the email list of Communist Workers and Peasants Party, Pakistan email list on Yahoo groups. The link is http://groups.yahoo.com/group/cmkp_pk/

OT Thanks for the link Renegrade I have posted it

Great post. I was aware of the irony: that the neo-cons are angry at way the law came back to bite them in the ass. I'm sure they're not. And, I agree with you -- when the FUCK did the CIA become our friend? I don't watch Alias, I'm embarrassed that I was dragged to see Clear and Present Danger and the story of Valerie Plame, recruited at 22, makes my skin crawl. I do not trust the CIA and do not want them around. Here's a little known rumor that I've heard: Minneapolis has a strong CIA connection, the Washburns, Crosbys and Carlson (WCCO) were very involved in the formation of the CIA. And, as far as facts go, isn't it interesting that the reporter who broke the story about the CIA flooding the African American community with crack was found dead of an apparent suicide (of course, after being discredited) alone in a hotel room?

They are our Gestapo and no one seems to mind. My final question is: 'Do you feel safer because they exist?'

it's very clear that CIA has done alot of dirty work inside the states and around the world ,political assassinations ,fueling wars and conflicts and when the role of a person or a government ended they get rid of him like what they did with saddam ,by the way do they still need israel ?!!!

Thanks for posting this informative post. and thanks for your comments on my blog.
Well, when it comes to the posts regarding the SL presidential elections... my site is only a personal blog. The official webite of the SEP is http://www.wsws.org [World Socialist Web Site] Please visit it for more info.
SEP is not limited to Sri Lanka. There is a SEP in the US too. it contested the 2004 US presidential election. It is the US section of the Internetional Committee of the Fourth International. Visit www.wsws.org for more.
I'll bookmark your blog. It is very interesting

But the CIA IS your friend.